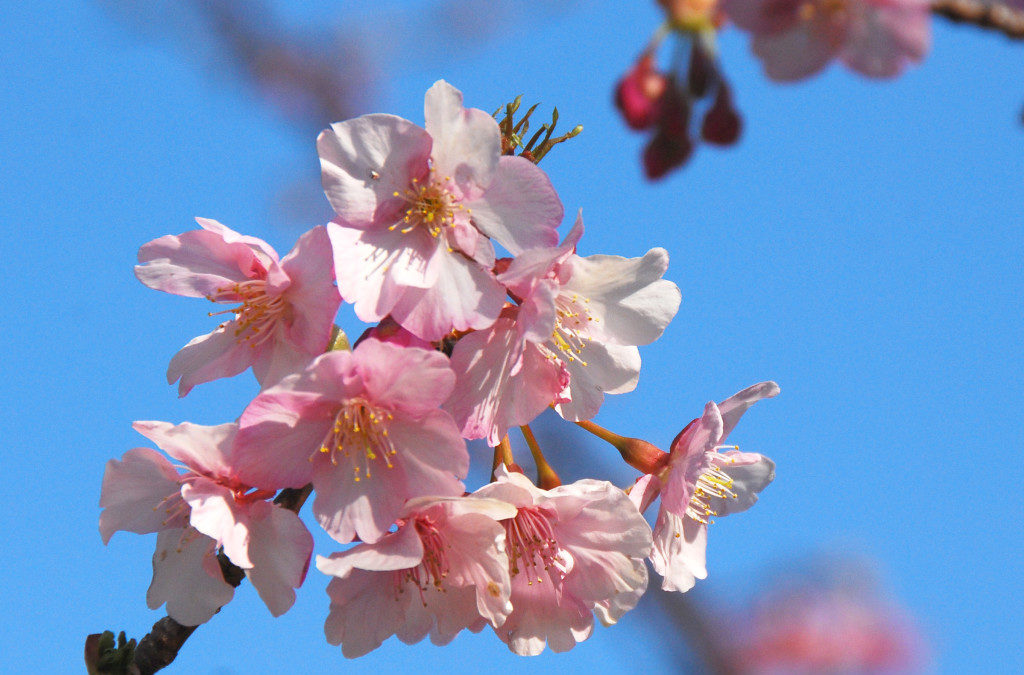 This year at the Shore the blossoms came out on schedule, in late April and into May, even though the temperature was many degrees short of spring-like. They only hung around for what seemed hours instead of weeks, but they did show up. Reluctantly. A matter of duty.

We haven’t been getting along with nature for the past decade or so, have we? Environmentalists say it’s because the condo developers are eating up the land and developers insist on “Progress” at all costs. That’s an over-simplification, of course, but the anger is all too real. We live in a culture of rage. If Mother Nature were truly a mother, she would resemble one of the mythological Furies, roaring around the planet birthing floods and tornados, earthquakes and droughts.

Which is what we have.

What does it mean? Our first—and maybe only—response is to blame “them.” It’s “their” fault, those who won’t take responsibility. Those who don’t agree with us.

I remember a girl I taught many years ago when students were environmentally sensitive. She told me of a great happening when everyone got together in the woods to sing and rejoice in each other and just be happy. But when they left to go home, the area was a wreck. Empty cans, dirty napkins, cigarette butts, litter all over the place. I’ll never forget the look on her face when she asked, “Why did we do that?” We, not they. Like sad little Pogo in the 1970’s cartoon, looking forlornly on a littered landscape and saying, “We have met the enemy and he is us.”

Is that the answer? To become environmentally aware? To cease building? To grow and eat only organically pure food? And (in a really illogical leap) to put Wal*Mart out of business? But people need buildings and roads, and infrastructure improvements, and McDonald’s food prices, and Wal*Mart bargains. They don’t have time to put their lives on hold while we create a working Utopia.

Somehow outlawing the obscene worship of money would probably help, but we do live in a democracy and we have chosen a capitalistic system. Would we prefer to live under a king who would pronounce “Off with their heads!” when someone was amassing too much wealth? Or a socialistic system of equality run wild regardless of the talents of the individual?

What can we do? Something about the anger, I think. Something about the value of relationships. We can move carefully out of our entrenched beliefs toward the position of the enemy, not to accept it unreservedly but to try to understand it, to respect it. We can realize that maybe our own egos cause a hearing problem.

According to these selections from Laurence Freeman’s Aspects of Love 2:

The ego is dissolved only by love, by opening itself to what lies beyond it, to the true light of which it is only a dim reflection . . . We cannot love ourselves without entering into poverty of spirit. . . .: giving up, letting go, renouncing the patterns of control and effort and ego, in which most of us have become addictively enmeshed.

As time passes it is easy for us to allow the natural virtue of hope to slide into fantasy. We then settle for false consolation rather than for the conviction . . . that what seems to be the worst can evolve into the best. There is always risk in hope. And the courage to endure, embrace and in the end to simply be.

Hope, to me, is well-illustrated by the tough little green shoots that push through cracks in concrete sidewalks.

And by blossoms. Maybe they’ll stay longer next year.