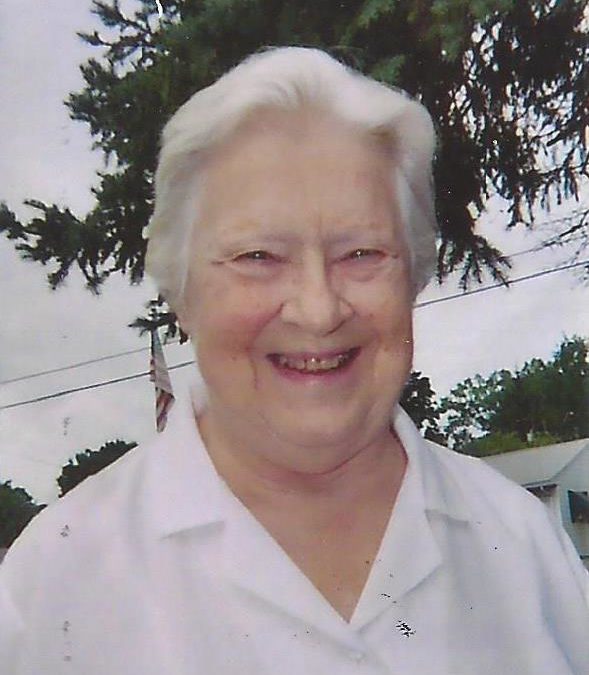 Sister Jean Lawrence Strack, OP of the Dominican Sisters of Hope died at the Wartburg, Mount Vernon, New York on March 19, 2018. She was 96 years of age.
The daughter of the late Adam M. and Mae Hessters Strack, she was born May 9, 1921 in Hartford, Connecticut.
Sister Jean Lawrence entered the novitiate of the Dominican Sisters of Newburgh, New York, on February 2, 1946, made her First Profession September 27, 1947, and Final Profession September 27, 1950. Sister earned her BA in Biology from Good Counsel College and her MS in Biology from Catholic University.
Sister Jean Lawrence taught biology and science from 1947-1977 at Pope Pius XII Regional High School in Passaic NJ, Gloucester Catholic High School in Gloucester NJ, Immaculate High School in Danbury CT, and Mount Saint Mary Academy in Newburgh NY, where she was also chair of the science department. From 1984-89, Sister was the Regional Coordinator of DARE for Orange County, affiliated with the Archdiocese of New York and then for New Jersey State Drug Rehabilitation Program in Passaic. Returning to Mount Saint Mary Center in Newburgh in 1989, Sister worked in the congregational finance office. From 1996 until retirement in 2009, she volunteered with Outreach and Respect for Life and with the Senior Citizens Club 60 at St. Mary’s Parish in Newburgh, NY. In 2009 Sister Jean Lawrence moved to Meadowview at the Wartburg, Mount Vernon, New York.
The funeral will take place on the grounds of Mount Saint Mary College, Newburgh, New York. There will be a viewing in the Dominican Center in the Chapel of the Most Holy Rosary beginning at 9:15AM on Monday, March 26, 2018. This will be followed by a Prayer Service at 10:15 and the Mass of the Resurrection at 11:00 AM. Burial will follow immediately at the Dominican Sisters Cemetery on the College grounds.
Sister is predeceased by her parents, and her two brothers John and Lawrence Strack.
Donations in Sisters memory may be made to The Development Office of the Dominican Sisters of Hope 299 North Highland Ave, Ossining, New York 10562.
Funeral arrangements are under the direction of Brooks Funeral Home, Newburgh, New York.