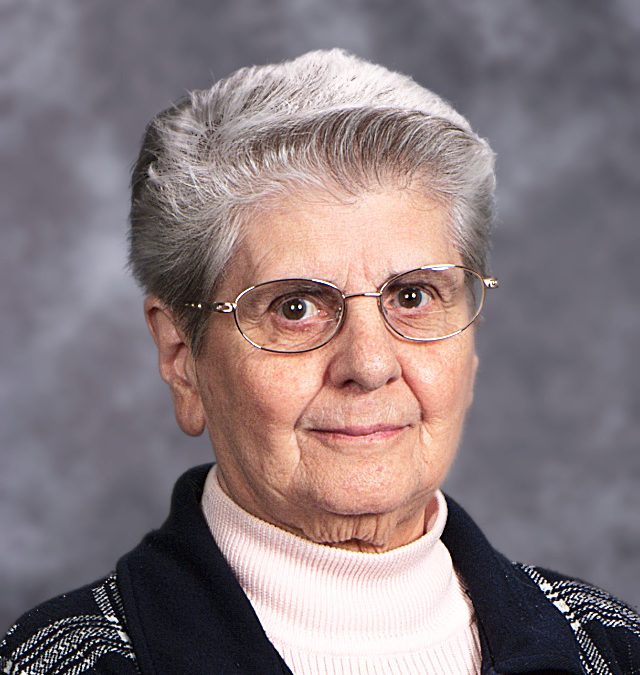 Recently I was reminded of a very famous picture that you have probably seen at least on one occasion.  It is a picture of Jesus standing outside of a door that is overgrown with ivy. If you look closely one can observe that there is no knocker or handle on the outside.  The portrayed idea is that Jesus stands there and knocks but there is no way for him to enter unless someone on the other side of the door decided to open it and let him in.

All of us gathered here this morning knows that not only did Anne Joachim open the door to let Jesus in –but she allowed him into every cell of her being.  He was the welcome guest that resided within her until the day Jesus called her to the mansion prepared specially for her. (Personally, I think she may prefer just a simple home.)

These readings that Anne Joachim chose today to celebrate her own life are filled with the faith and daresay I add the HOPE she possessed and shared in her years and days with us.

Wisdom tells us that the souls of the virtuous are in the hands of God…” they appear to die” but they are really at peace with their Creator.  Those of us who were fortunate to spend any time with Anne Joachim during the last week of her life as we know it realized:  she was in peace.  God had proved her worthy to be with him.  She was “tested like gold in the furnace” especially during these last 12 months.  Anne Joachim suffered from the symptoms of her illness: having neuropathy, stressful ambulation and pain, especially at night.  She often questioned the pain but never did I hear her blame God for it because she understood in a profound way—Suffering was an integral part of the way of the Cross.  Those who are faithful will live with God in love for grace and mercy awaits the chosen ones.

We just heard in the reading from Colossians that God’s saints should be clothed in “compassion, kindness, humility, gentleness and patience”.  These virtues define Anne Joachim’s life—except at times I think she had to work on patience.  She was feisty as anyone can testify who sat with her through a Jets football game!   WOW could she tell the players through the TV set what they should have done or need to do to win the game!  Anne may not have always been patient with herself or the Jets – but she exemplified the virtue when she was in the presence of others especially in a helping or pastoral way.

In this day of instant and sometimes impersonal communication Anne Joachim was always attentive to anyone who was in her presence.  And when she realized her time to be called to one of God’s mansions was in the very near future, she asked S. Brigid, her companion and soul mate for so many years, for forgiveness if she had offended her in any way.  The peace that only God can bring was already reigning in her heart.

Psalm 23 reminds us that God IS our Shepherd: who leads us to waters of repose and revives our spirits. During the times of suffering there is no fear for the faithful followers. In the Psalm the rod symbolizes all that is hostile and painful in our lives. On the other hand the staff reminds us the shepherd is the one who directs and guides the sheep.  And he is even willing to die in order to save those entrusted to his care.  So imagine how much Jesus as the Good Shepherd is willing to sacrifice for each of us – and that He did on his cross.  But he reiterated to his disciples that a banquet is prepared for all followers.  For Anne Joachim’s sake I am sure some wonderful Italian food will be served on her banquet table!

In the Gospel we are again reminded of a home.  Only this time, there is no need of a knocker or door handle – because Jesus had already entered Anne Joachim’s very body, heart and soul so long ago. The welcome door is held open by the Host.  Don’t you suppose that Mary was also there to greet her beloved daughter who had such great devotion to the Blessed Mother during her life? I have no doubt that her parents, brother, other family members and friends who had predeceased Anne Joachim joined in that home coming feast too.  We will miss her daily presence with us but are consoled to know she is where she longed to be during her whole physical life here with us.

As many of you may realize, I did not know Anne Joachim as teacher, principal or all the other roles she fulfilled in the first 50 years of her life as a Dominican Sister. I came to know and love her as companion and most important as friend in the last 10 years when she, Brigid and I worked together in service to our Sisters. Anne loved transporting them to and from appointments, stores or wherever they needed or wanted to go. She was especially gifted in fixing anything mechanical much to the delight of our frustrated Sisters! And I will never forget her infectious laugh whether Anne was telling stories about those teaching days or she was sharing in some of my mundane jokes. Her smile was always present even in the most trying of times and indicated the inner peace that was at the core of her being. Anne Joachim had a deep love not only for her family, but for Brigid’s family and all the friends she met along the way.  I am glad Helen and Louis, some of her nieces and nephews could be present here today and for those who could not be with us – to celebrate her wonderful and giving life.

Now Anne, I want to speak to you personally. You taught me almost everything I know about football, which is really very little in the scheme of things.   But I will miss sitting with you and enjoying your comments to the team, coaches and referees as we watched the game. Even though I am a Giants fan of some sort I will be united with you in spirit as I root for your favorite team in the future. And we will chant together:  GO JETS!

Sister Anne Joachim Vari, OP of the Dominican Sisters of Hope, died September 25, 2015 in Calvary Hospital in the Bronx, NY. She was 83.

The daughter of the late Vincenzo and Elvira (Campitelli) Vari, she was born March 1, 1932 in Camden, New Jersey.

Sister Anne Joachim entered the novitiate of the Dominican Sisters of Newburgh, NY on September 8, 1955; made First Profession in June 1957 and Final Profession August 20, 1960.

Sister Anne Joachim began her teaching ministry in 1957 at Saint Anthony School in Hawthorne, NJ. In 1965, she transferred to Saint Lawrence School in Lindenwold, NJ and remained until 1971. She was principal at Holy Trinity School in Passaic, NJ from 1971-79 and teacher from 1979-95. Sister taught at Saint Christopher School in Parsippany, NJ from 1996-2007. She retired to the Newburgh Center of Hope in 2007 and moved to the Wartburg, Mount Vernon, NY. Until her illness, Sister spent her time caring and visiting the Sisters who live at the Meadowview at the Wartburg.

Funeral Services for Sister Anne Joachim were held on Tuesday, September 29, 2015 at the chapel in the Dominican Center at Mount Saint Mary College, Newburgh, NY.

Donations in Sister Anne Joachim’s memory can be made to the Dominican Sisters of Hope Development Office, 299 North Highland Avenue, Ossining, New York 10562-2327