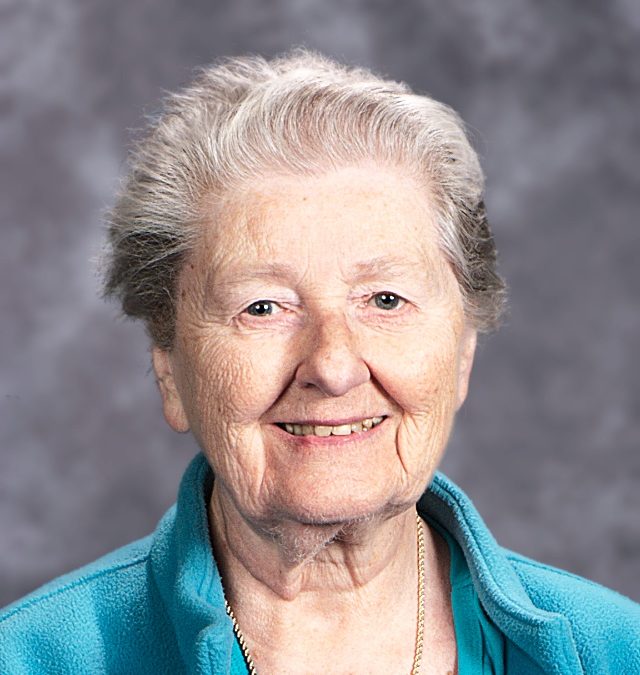 Sister Delphine Croft, OP (Sister Marie Michael) of the Dominican Sisters of Hope, died Jan 21, 2022 in Hackensack Meridian Nursing and Rehabilitation Center at Manor by the Sea in Ocean Grove, NJ. She was 90 years of age.

The daughter of the late Michael John and Marie Symanski Croft, she was born January 1, 1932, in Jersey City, New Jersey.

Sister Delphine entered the novitiate of the Dominican Sisters of Newburgh, New York in September 1954, made her First Profession in June 1956, and Final Profession in August 1959. Sister Delphine earned her BA in the Humanities from Villanova University and her MDiv in Pastoral Ministry at Immaculate Conception Seminary, Darlington New Jersey.

Sister Delphine spent some fifty years as an educator, an administrator, and a Director of Religious Education. In New Jersey, Sister taught elementary level at St. Joseph’s Elementary School in Toms River (1956-58), St. Rose School in Haddon Heights (1958-61), St. Mary School in Gloucester (1961-68), and St. Cecilia School in Iselin (1972-80). In New York, she taught Holy Rosary School in Hawthorne (1971-72). She spent three years as principal at St. Patrick School in Woodbury NJ (1968-71). Using her expertise in Pastoral Ministry she was director of religious education at Holy Trinity Parish in Passaic NJ (1981-98) and then following a sabbatical, she became Associate Director for parish catechetics with the Archdiocesan Catechetical Office in Newark NJ (1999-2006).

Sister retired from formal ministry and moved to Asbury towers in New Jersey. Sister loved the ocean and commented that she looked for retreat places on the water. In her words “I enjoy my new home…it is great to think this isn’t just vacation or retreat but a place I don’t have to leave at the end of the week.”

In Sister’s own words, “My years were filled with prayer, work, and play, so many memories that can’t be expressed but a big Thank You to all whom my life has touched- both living and dead. It made the years joyous and unforgettable.”

Sister is predeceased by her parents and her brother Robert. She is survived by her Dominican Sisters of Hope, her sister Carol Green, her brother-in-law Samuel, her niece Michele Green, and Michele’s husband Brian, their son Sam and her nephew Geoffrey Green and his wife Christine.

A celebration of Sister Delphine’s life will take place on Monday January 31, 2022, at the Dominican Center, in the Chapel of the Most Holy Rosary, at Mount Saint Mary College, Newburgh, NY. The viewing will take place starting at 9 a.m. followed by a wake service at 10:15 a.m., and Mass of Christian Burial at 11 a.m. followed by the burial in the Dominican Sisters of Hope Cemetery on the grounds of Mount Saint Mary College.

Donations in Sisters memory can be made to the Dominican Sisters of Hope Development Office, 299 North Highland Ave, Ossining, NY 10562.

Funeral arrangements are under the direction of Brooks Funeral Home, Newburgh, NY.