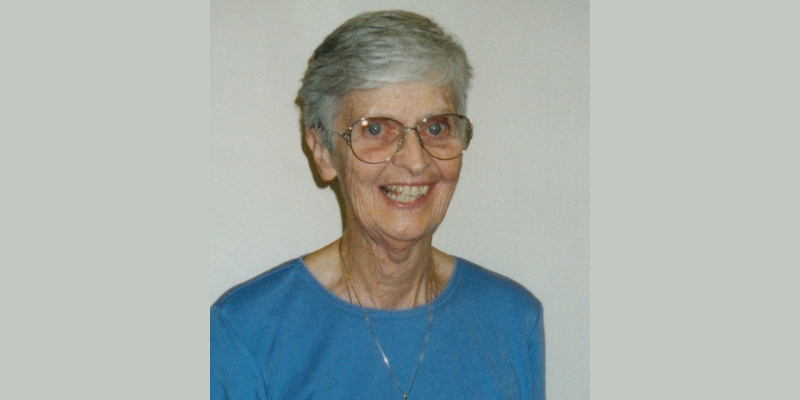 Sister Frances Schier, OP (formerly Sister Leo Marie) of the Dominican Sisters of Hope, died November 25, 2015 in Caldwell, NJ at the St. Catherine of Siena Convent. She was 87 years of age.

The daughter of the late Leo John and Sarah Scanlon Schier, she was born December 20, 1927 in Jersey City, New Jersey.

Sister Frances entered the novitiate of the Dominican Sisters of Newburgh on September 7, 1944, made her First Profession June 24, 1946, and Final Profession August 25, 1949. She earned her BA in History from Seton Hall University and her MA in History from Catholic University in Washington, DC. She also participated in the Religious Leaders Program at the University of Notre Dame.

Sister Frances enjoyed many years of service to God’s people, first in the field of education and later in pastoral ministry. She began her teaching ministry at St. Rose of Lima School in Haddon Heights, New Jersey (1946-1953) and then taught at Saints John and Paul School in Larchmont, New York (1953-1959). From there Sister went to Gloucester Catholic High School, Gloucester, New Jersey, where she taught History (1959-61). Leaving Gloucester, Sister Frances studied at Catholic University in Washington and lived at the Dominican House of Studies (1961-1963).  She came back to the south Jersey area as principal of St. Joan of Arc School in Camden, NJ (1963-1967).  From 1967-1969 she taught at Pope Pius XII High School in Passaic, NJ, as a History teacher.  Once again her administrative skills were used when she was called upon to be Associate Superintendent of Schools for the Archdiocese of Newark for Hudson County (1978- 1982), then as Principal of St. John and Paul School in Larchmont, NY (1982-1984). Having spent most of her years in education, in 1984 Sister felt called to study at the University of Notre Dame, Indiana in preparation for a new ministry as a pastoral associate. From 1985-2001, she worked as pastoral associate at Our Lady Mother of the Church in Woodcliff Lake, New Jersey. Sr. Frances retired in 2001 and lived first at Ascension Convent, Milford, NJ and then at Paramus Catholic High School Convent, Paramus, New Jersey. In the last three years, she first lived at Morris Hall in Lawrenceville, NJ (2012-2013) and finally at St. Catherine of Siena Convent in Caldwell, NJ. (2013-2015).

Sister Frances Schier is predeceased by her two brothers, Walter and Leo Schier.  She is survived by her nieces Fay Rutka, Susan Schier Noto, Jane Schier, Christine Schier and grandnieces and grandnephews.

Sister Frances was buried on December 1 at the Dominican Sisters of Hope Cemetery, in Newburgh, NY.

Donations in Sister Frances’s memory can be made to the Dominican Sisters of Hope Development Office, 299 Highland Ave, Ossining, New York 10562-2327.