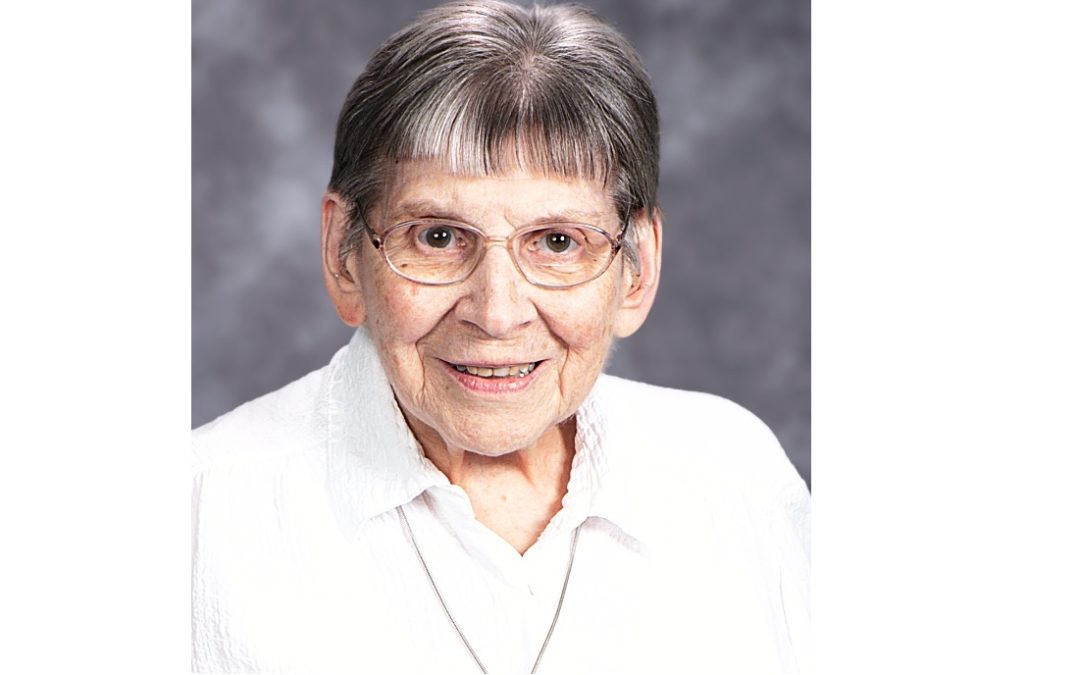 Sister Grace Ball, OP, (formerly Sister Marie Francine) of the Dominican Sisters of Hope died December 12, 2015 at Wartburg, Mount Vernon, NY. She was 89. The daughter of the late Charles and Mary Baum Ball, she was born March 14, 1926 in Brooklyn, New York. Sister Grace entered the novitiate of the Dominican Sisters of Newburgh on October 3, 1943, made her First Profession June 21, 1945, and Final Profession August 25, 1949. She earned a BS in Elementary Education from Villanova, Pa.

Sister Grace taught at St. Mary School in Gloucester, NJ (1945-53), Academia San Jose Elementary School Guaynabo, Puerto Rico (1953-1967) then from 1967 to 1972 she served as the Principal, St. Boniface School in Paterson, NJ (1972-74), Bishop Navagh Regional Elementary School in Paterson, NJ (1974-75), Sacred Heart School in Camden, NJ (1975-78). In 1978 until 1983, Sister once again served at Academia San Jose Elementary School in Puerto Rico. She returned to the states and was assigned to Star of the Sea in Long Branch, NJ (1983-86), and St. Mary School in Gloucester,NJ (1986-88). Again in 1988, Sister returned to Academia San Jose in Puerto Rico and taught there until 1992. While in Puerto Rico she regularly visited the poor and the lepers on Saturdays. From 1992 to 1995 Sister became a Child Care Worker at St. Vincent’s Tacony, Philadelphia, Pennsylvania. She continued her service in Pennsylvania from 1995 to 2002 as a religious development and emotional support person to children. While at St. Vincent’s she regularly tucked the children into bed and said night prayers with them. After enjoying many years of working with young children, Sister Grace Ball retired in 2002. From 2002 to 2009, Sister lived at the Center of Hope in Newburgh New York. In 2009, Sister moved to Meadowview assisted living in Wartburg, Mount Vernon, New York. There Sister Grace regularly chatted with the residents. She daily kept a holy hour of prayer for all the intentions for which people had requested her prayers. Sister Grace has always been a good letter writer and this was the way she kept “in touch.”

Sister is predeceased by her brother Walter. She is survived by her four sisters, Mary Lenski, Dolores Ball, Margaret Nuxall, and Clair Sardisco, and nieces and nephews.

Visitation will be held Wednesday, December 16, 2015 at the Chapel in Dominican Center at Mount Saint Mary College in Newburgh, NY beginning at 9:15am. The wake service will be at 10:15am followed by the Mass of the Resurrection. Burial will take place at the Dominican Sisters of Hope Cemetery in Newburgh, NY. Donations in memory of Sister can be made to the Dominican Sisters of Hope Development Office, 299 Highland Ave, Ossining, NY, 10562-2327.

Funeral arrangements are under the direction of Brooks Funeral Services, Newburgh, NY.

Below, Sister Grace Ball wrote a reflection in 2012 to “tell her story” as a sister. More information about Sister’s ministry can be found here.

This is to tell my “story,” as you requested:

I entered Mount St. Mary in Newburgh New York on the Hudson in 1943 when I was in high school; I was 17. It all began when I was in second grade at St. Martin’s Elementary school. I was about seven years old. I was on the line waiting for my turn to have a drink of water when God was talking to me. I felt it was truly God; He said one sentence: “ You are to be a Sister.” I was surprised and somehow happy, but I did not understand this message as I had never thought about it. It is my concern. I’ll do it! Never did I doubt about it, so I let it be! And I did, until one evening when I was walking home from church with my father and, suddenly, I remembered that I could be a Sister at sixteen-years-old! And I said,” Daddy, Daddy, I just remembered what I had read in a book: you could be a sister at sixteen, and dad I need your help.” I’m seventeen and here I am when, suddenly, I said again,” Dad you’ll have to help me.” He said,” I don’t know how.” I responded, “Think, Daddy!” Silence. Then he remembered that he had attended Holy Rosary School in New York City.

We got off the subway train. We arrived at a huge stone building that housed some semi-cloistered Sisters of our Order and other Dominican Sisters. Dad stood in complete silence and just stood there! So I said, “Daddy ring the bell!” Suddenly, a very old nun answered the door… Silence… Dad forgot the name of the Sister he remembered from school. So we both stood there in silence.

She retreated and said she’d get another sister to help us. Her name was sister Jean Marietta. She invited us in and we sat down and chatted a bit. She told me the information necessary; this was in September. When I arrived home, I was very excited and told my mother I could enter the convent at Newburgh. My mother calmed me down. My mom thought I wasn’t ready, but I said, “Please call and get the information I need.” My mother was a very calm person and obeyed. I was too excited to remember everything. So, in and out, we took the subway etc.… My mom and dad and maybe one or more of my sisters headed for the Mount. When we arrived, we visited a bit, and it was time for my family to head for home.

That was the beginning of my religious life! My mother knew I was not mature enough. I can remember saying to her, people don’t lie. She could not convince me so she let the matter go.

I finished my preparation time and was sent to Gloucester, New Jersey to “help” the first grade teacher, Sr. Agnes de Lourdes. It was a small wooden building. The following year, I was given a small group. This was my first mission. I was also missioned in Camden and Paterson, New Jersey.

Then, I was sent to Puerto Rico, Academia San José, Villa Cappara. I really enjoyed teaching English there. After many, many years, I was transferred to San Lorenzo. I was assigned to be a principal and teach English. I did not know any Spanish and I was given a difficult task. But I had a special guardian angel; the school secretary who was bilingual. Most of all, on certain days, I went into the campos where the very poor lived. Some of the little children would meet me when I got off the bus and escort me. I loved visiting these people.

I still did not speak or understand Spanish, but I could relate to the simple people very well. Just a brief encounter I had with very poor old woman made a lasting memory. When I was trying to explain my sorrow and concern for her she said, “It’s okay. We understand you because you speak with your heart and we all understand that.”

I was in Puerto Rico for twenty-nine years. I went back to the States twice, but my heart was in Puerto Rico, so I went back there again. This time, I had a nice surprise. I was very much pleased with Father Damien Molokai and prayed that I would be able to work with the lepers who were in this small hospital. This was something I loved. At least once a month, a friend accompanied me and took me to visit. We had some small activities on these visits.

As it so happened, I went teaching religion on Sunday mornings at Fort Buchannan. Getting to know the staff there was a tremendous help. With the help of some of the staff, we had a great big Puerto Rican fiesta, a barbecue at the beach. We had a bus for the patients, and a pig roast. When we arrived, the staff set up high tents and they cooked Puerto Rican food and roasted the pig. What a glorious day for all of us! Praise God! God always supplies! Amen.

Once again, I was back in the States. I wanted to work with needy children, and St. Vincent home took care of abused and homeless children ages two to twelve. This was a new kind of ministry for me. I held my breath and applied. I worked there for ten years. Finally, I returned to Mount St. Mary convent. It was disappointing as there was no ministry for children.

Before I forget, next year, 2013, I’ll celebrate my 70th anniversary as a Dominican sister of hope! Thank God!