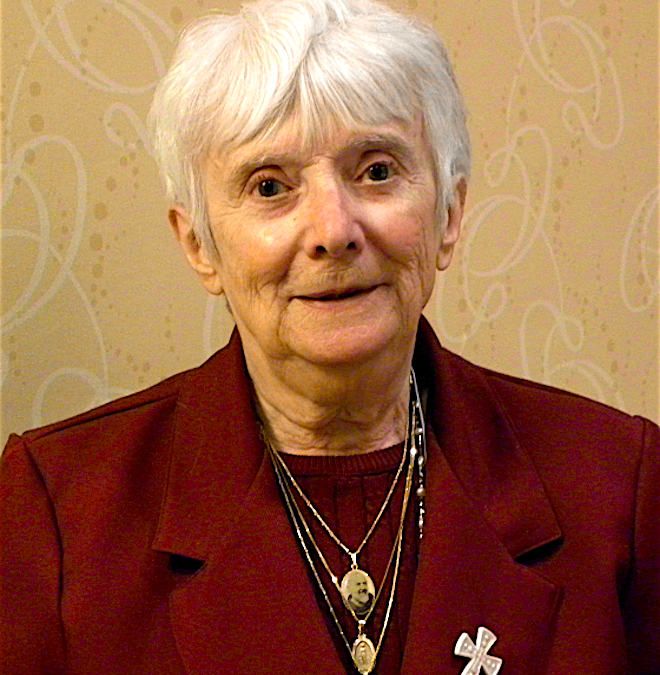 Sister Marie DiCamillo, OP (Sister Joseph Mary) of the Dominican Sisters of Hope, died on September 13,2017 in Woodbury, NJ. She was 85 years of age.

The daughter of the late Joseph and Mary (Lochetti) DiCamillo, she was born March 6, 1932 in Camden, New Jersey.

Sister Marie entered the novitiate of the Dominican Sisters of Newburgh, New York in September 1952, made her First Profession in June 1954, and Final Profession in August 1957. Sister Marie earned her Bachelor’s Degree in History/English from Seton Hall and her Master’s Degree in Student Personnel Service from Glassboro State College.

Sister Marie DiCamillo taught elementary school students at several Catholic schools both in New York and New Jersey. She then became a special education teacher at Camden County Health Services Center, Lakeland NJ (1980-88); teacher of handicapped at Ancora Psychiatric Hospital, Ancora, NJ (1988-96); guidance counselor and vocational teacher at the Atlantic County Transitional School for the Department of Human Services/Office of Education (1996-98). From 1998-2005, Sister Marie worked with the Southern Region Child Study Team/Department of Human Services/Office of Education, working at the Gloucester Campus in Williamstown, New Jersey, and at the satellite office at Burlington County Special Services School District/Lumberton Campus, New Jersey. In 2006, she continued her ministry there as a volunteer. After a long and fruitful life in the field of education, Sister retired first to The Wartburg in Mount Vernon, NY and then in Woodbury Mews, Woodbury, NJ.

Sister’s funeral will take place on Friday, September 22, 2017 in the Chapel of the Most Holy Rosary in the Dominican Center at Mount Saint Mary College in Newburgh, New York. The viewing will be in the chapel beginning at 9:15am. The Wake Service will follow at 10:15am. The Mass of Christian Burial will be celebrated at 11am. Sister’s burial will follow immediately after the liturgy in the Dominican Sisters’ Cemetery at Mount Saint Mary in Newburgh, NY.

Donations in Sister Marie’s name can be made to the Development Office of the Dominican Sisters of Hope, 299 N. Highland Avenue, Ossining, NY 10562