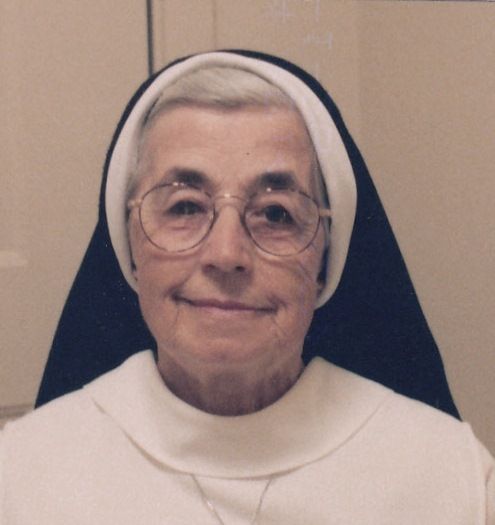 Sister Marie Jeanne Beauregard, OP of the Dominican Sisters of Hope, died Monday, May 18, 2020 in Fall River, MA. She was 91 years of age.

The daughter of the late Romeo and Marie Jeanne (Rivard) Beauregard, she was born February 20, 1929 in Saint Liboire, Quebec, Canada.

Sister Marie Jeanne’s first ministry was farm maintenance at St. Rose Convent in Acushnet, Massachusetts, as well as caretaker of St. Joseph’s grotto on the grounds of the convent (1952-59). She then moved to Plattsburgh, New York where she was sacristan at St. Peter’s Church, as well as a driver for the Sisters and in charge of maintenance at St. Dominic’s Convent.

Sister Marie Jeanne returned to Massachusetts in 1969, where she provided support services for the Sisters at St. Catherine’s convent on Park Street in Fall River. She also supervised the cleaning of the Academy and worked in the Academy cafeteria until the school closed. She also did sewing and professional alterations, was infirmary assistant, sacristan and Eucharistic minister from 1995 until the convent closed in 2002. While living on Park Street Sr. M. Jeanne was involved in many fundraisers: bingo, the annual yard sale, the “Festival of Joy” and, for thirteen years, the craft shows at Durfee High School.

In 2002 she was one of seven Dominican Sisters to move to the Landmark Independent and Assisted Living facility in Fall River where she continued to provide transportation for our Sisters, did sewing and alterations for school cafeteria workers and many other customers, was sacristan and Eucharistic minister at the chapel there, and visited the Sisters who moved from Landmark to nursing facilities, seeing to all their needs.

Sister is survived by her Dominican Sisters of Hope. She was predeceased by her parents, her brother Antonio and her sisters Jeannine Lemay, Therese Tremblay, Noella and Marie-Paule Beauregard. She is survived by siblings Germain, Paul, Eglantine, Andre, and Helene.

Funeral arrangements are under the direction of Boule Funeral Home and burial will be in Notre Dame Cemetery.