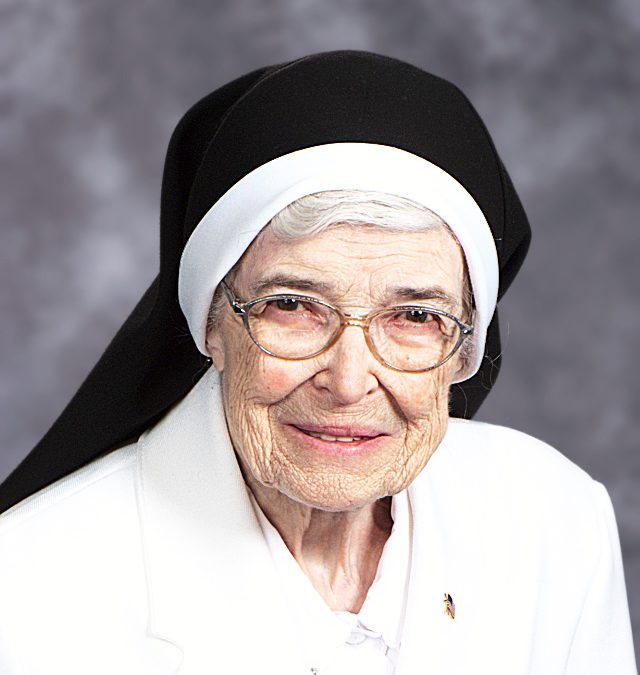 The daughter of the late James Patrick and Anna Cronin O’Rourke, she was born July 23, 1916 in Philadelphia, Pennsylvania.

Sister Rosanne entered the novitiate of the Dominican Sisters of Newburgh on September 6, 1937, made her First Profession June 18, 1939, and Final Profession August 21, 1945. Sister Rosanne earned her BS and MA in Elementary Education from Villanova.

Sister Rosanne, taught elementary level students at St. Paul School in Jersey City NJ (1939-43) and at St. Mary School in Gloucester NJ (1943-59). She was principal at Annunciation School in Tuckahoe NY (1959-65). She then returned to elementary education and taught at Holy Family School in New Rochelle NY (1965-72), SS John & Paul School in Larchmont NY (1972-73), and St. Lawrence School in Lindenwold NJ (1973-90). She continued at St. Lawrence School as librarian until 1997. She also taught religious education classes until 1993. Sister Rosanne moved to the Dominican Sisters of Hope Center in Newburgh when she retired in 1997. While there, she volunteered in the Dominican Sisters’ infirmary. In 2009 Sister moved to Meadowview at Wartburg in Mt. Vernon, New York. In 2016 she moved to St. Catherine of Siena Convent in Caldwell, New Jersey.

Sister is survived by many nieces and nephews. She is predeceased by her sister, Ann Cowley, and her brother, James O’Rourke.

Visitation was on Wednesday, November 16, 2016, 9:15 a.m. at Our Lady of the Rosary Chapel at the Dominican Center at Mt. St. Mary College, Newburgh, New York. This was followed by a wake service at 10:15 a.m. and the Mass of Christian Burial at 11:00 a.m. in the Dominican Sisters cemetery.

Donations in Sister Rosanne’s memory can be made to the Dominican Sisters of Hope Development Office, 299 North Highland Avenue, Ossining, New York 10562-2327.