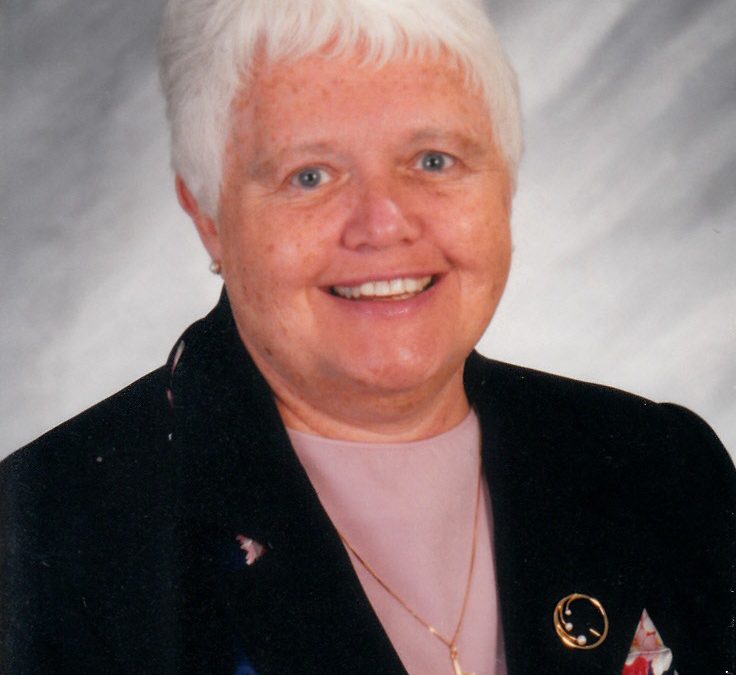 We are here tonight to celebrate the life of S. Virginia Hanrahan.  Each of us comes with many stories about her – and I would like to share some of my thoughts with you.  As many of you know she was called Ginny or Ginger by family and friends.  She was born in Woodside but raised in the Bronx, with loving parents, three sisters and one brother in an Irish milieu.  Sometime during her school days, Ginny became acquainted with the Dominican Sisters of the Sick Poor and grew to love the mission and ministry of Mary Walsh.  In fact the saying, “I want the poor to have the same care as those who can afford to pay,” became seared into her very being.  This led Ginny to join the congregation and she became a lifetime spokesperson and champion with and for the Sick Poor.  Like Mary Magdalene and the women in the Easter narrative, Virginia went out to spread the Good News not only of Jesus’ resurrection but to live the gospel message of the Beatitudes.  She was especially passionate about the first one:  “Happy are you poor; the Kingdom of God is yours.”  (Luke 6)

Virginia had a full life.  I am sure you are aware of her many accomplishments. She worked as a community health nurse at the Martin Luther King Center in the South Bronx before assuming the role of Executive Director and then CEO of the Dominican Sisters Family Health Service.  She received several awards during these years, but she also served on the DSSP leadership team and several congregational boards.  She entered the congregation with Mary Mitchell and they were fast friends until Mary’s death in 1995.  Ginny missed her terribly but realized Mary was now in a better place. Her faith never seemed to wavier. She was especially honored to receive the Ellis Island Medal of Honor and the Honorary Doctorate from  the College of New Rochelle.

But Ginny was more than a “doer” – she was a good listener and very supportive of her family members and many dear friends.  Especially in her retired years, Ginny would be on the phone or writing a personal note to someone who was sick or needed encouragement at the time.  As much as she was an advocate for health care for the poor, she did not completely take the responsibility for her own health needs.  Gradually her spirit was willing to continue an active role but the body began to say something different to her.  Her weakened condition caused her much distress and it became evident she could no longer function as CEO of the Health Service.  But she put her trust In Mary Zagejeski and all who would follow to carry on the torch for the poor.  It was during these latter years Ginny went from being mentor to friend and confidante to me. I treasure this time because we were able to share on a deeper faith level and I was always welcomed at any time in her wonderful apartment.  Of course, as some of us know, there was always a short or long list of things she needed done before we could start our conversation!

In November Ginny encountered several long hospitalizations. During the following months her ability to speak diminished.  It was an irony that this woman who her mother always said was “vaccinated with a phonograph needle” only responded minimally to questions, stories, etc. I am sure she was taking this time to process what was happening to her body and acknowledged she was going to be transitioning to a new life.  But the times she did communicate were always thought felt and poignant.  At the end of my visits with Ginny I would always ask:  Are you in pain?; do you have any complaints?; are you peaceful?  and for the first two, she would always shake her head in the negative, but affirmed the question of peacefulness. She approached her diminishment and death with courage and steadfastness and with the same dignity she exemplified in her whole life.  This morning I just found some of her burial plans which were not completed or sent in to leadership.  She requested the back of her Memorial card say.  “Do not be afraid, I am with you always.” It is no coincidence that the Gospel reading we just heard during this wake service was from the Annunciation and the Angel greeted Mary with the same words, “Do not be afraid.”  So  Virginia even though we are filled with sorrow at your passing onto a new life with the God who was and is  always with you, you  will always be with us in our thoughts, prayers and heart.

Note: The Mass of the Resurrection for Sister Virginia on Thursday, March 27 at 10:00 am in the chapel at Mariandale was LiveStreamed and now is archived. To see the recorded Mass  follow this link.

To read S. Virginia’s obituary in The New York Times follow this link.

Sister Virginia Hanrahan, OP of the Dominican Sisters of Hope, Ossining, NY, died March 21, 2014 at the Wartburg in Mt. Vernon, NY. She was 78 years of age.

The daughter of the late Joseph and Catharine (O’Neill) Hanrahan, she was born June 23, 1935 in Woodside, New York.

Upon completion of studies, she served as community health nurse with the Dominican Sisters of the Sick Poor in the Bronx (1961-63). She was Assistant Supervisor of the Home Health Agency from 1965-67. In 1967, she became a team nurse at Dr. Martin Luther King, Jr. Neighborhood Health Center in the Bronx. From 1968-73, she was Director of Nursing at MLK.

From 1994 until retirement in 2009, Sister Virginia was President and Chief Executive Officer of Dominican Sisters Family Health Service, a community based, certified, multi-county home health agency with a staff of 350 people and four satellite branches. From 1973-94, she served as Executive Director of this visiting nurse service.

Sister Virginia served on many Boards and Committees pertaining to community health. In 1999, she was awarded the Ellis Island Medal of Honor for “exceptional humanitarian efforts and outstanding contributions to our country,” and in 1998 received the Home Care Association of New York State’s highest award.

Sister Virginia served in Administration as Vicar General and Assistant to the President of Dominican Sisters of the Sick Poor from 1972-1980. She also served on various Congregational Boards and Committees: Center for Peace and Justice; Las Casas Fund for Cheyenne and Arapaho Indians; and the Executive Committee of the Archdiocesan Council of Women Religious.

Sister Virginia is survived by three sisters: Helen Rohrberg, of Las Vegas, NV; Madeleine Butler of Port Jefferson, NY; Kay Walsh of Wilmington, DE and one brother and sister-in-law, Joseph Hanrahan, Sr. and Arline of Woodland Hills, CA, several nieces and nephews and by her sisters in the Dominican Sisters of Hope.

Viewing will be held on Wednesday, March 26, 2014 from 4:00 to 7:00 pm at the Ossining Center of Hope/Mariandale Retreat and Conference Center in the Evergreen Room on the ground floor. There will be a wake service at 7:00 pm in the Evergreen Room. Mass of the Resurrection will be held on Thursday, March 27, 2014 at 10:00 am in the chapel at Mariandale and burial will follow in the sisters’ cemetery. Donations in Sister Virginia’s name can be made to Dominican Sisters Family Health Service, 299 North Highland Avenue, Ossining, NY 10562.