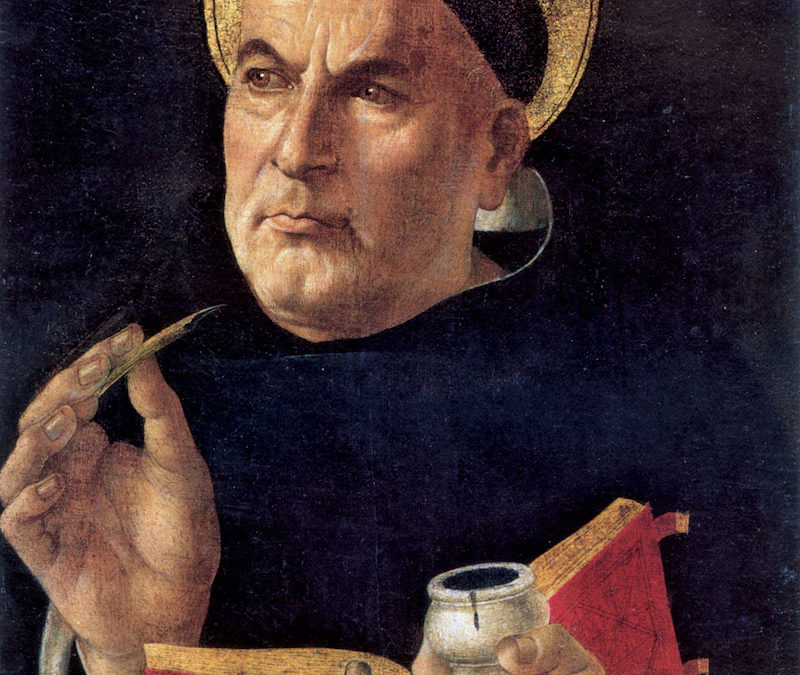 Thomas Aquinas was born in Italy in 1225 (only four years after Saint Dominic’s death). In 1244, he entered the Dominicans, and, in 1245, he moved to Paris (and later to Naples, Rome, and Cologne) to study, teach, and write.

Written toward the end of his life, Thomas Aquinas’s most noted work is the Summa Theologica, in which he posits five arguments for the existence of God. But, Saint Thomas’s genius is attributed to much more than a single work. He is honored as a Doctor of the Church, and is the patron saint of scholars, schools, and students. Nearly eight-hundred years after his death, his legacy continues to teach much about grappling with truth, learning, and how both are essential to faith.

Below are four lessons from Saint Thomas Aquinas that we do well to remember today.

1. Learning is really important, even when you’re no longer in school.

Thomas Aquinas’s lifelong focus on study was entwined with his identity as a Dominican. For Dominicans, studyisn’t just important, it’s essential. In fact, study is understood to be a form of worship. By using our talents to learn more about our world, we, in turn, learn more about God and our relationship to God.

2. Faith and reason are not mutually exclusive.

The more you study, the more this becomes evident. It’s been posited that Thomas Aquinas is the patron saint of evolutionary psychology, and with good reason. He believed firmly that both faith and reason ultimately come from God and that the two work in collaboration. In truth, our revelations and faith movements guide our reasoning, while reason clarifies and demystifies faith. We need both, and when we prioritize one over the other we miss out on the fullness of the world around us.

3. Wresting with truth is noble and necessary.

Although Thomas Aquinas is remembered as a writer, a thinker (or, in less-flattering accounts, a fat man), he is seldom depicted as a wrestler. Yet, Thomas Aquinas was just that: he wrestled with truths and engaged with them.

Thomas Aquinas pored over, read about, vigorously researched that which he believed to be true. In writing about Saint Thomas, Yves Congar notes,

Saint Thomas is synonymous with open-mindedness, realism, the desire to see things as they are and to accept every note of verity, convinced as he was that, since truth could not contradict itself, even partial truth must find its place in the vision of the whole.¹

Thomas Aquinas considered truth, critiqued it, and put pieces together such that something with more truth came out in the end. Whether it’s in relation to our faith beliefs, sacred texts, an academic discipline, the current political scene, or other aspects of our world, we, too, are called to wrestle with truth, to put pieces together, and to arrive at greater truth in the end.

4. In your spare time, write some music. It helps.

He’s regarded as a prominent philosopher and theologian, but Thomas Aquinas also had a creative bent. He wrote Pange Lingua, among other hymns, many of which the Church still uses today. Of course, writing hymns isn’t for everyone, but the tradition of pursuing one’s creative side is important.

Studying, reading, writing, debating, and drafting major church writings might be part of our call as people of faith, but getting creative can help us connect with God all the same.