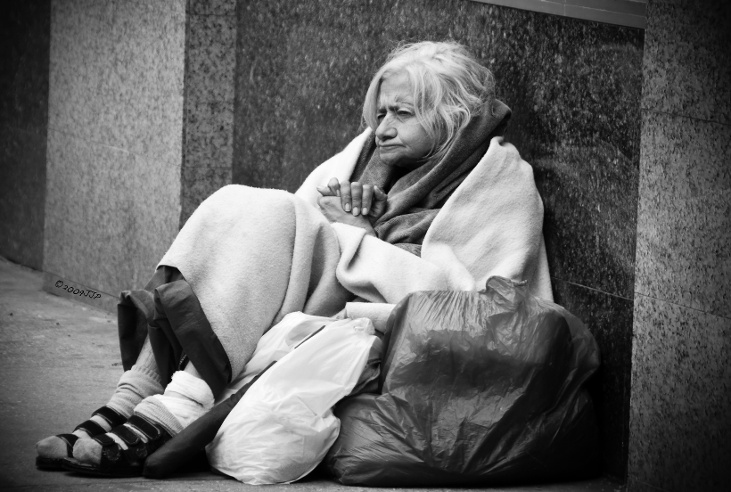 Dominican Sister of Hope Mary Alice Hannan was volunteering at a homeless shelter for runaways under twenty-one-years-old when she first met Desda. The year was 1982; Sister had a daily routine of walking to her home convent from the Times Square shelter every evening. She left the shelter solo, but while she walked she was never alone. She used that time to meet and befriend people on the streets.

“I was fascinated going by the same curbs, the same streets, meeting the same people every single day,” Sister Mary Alice recounted. “I used to want to know, ‘How do you live here? How do you sleep?’ And then the underlying question: How does this happen in this country? I got to know the street people: the good, the bad, the ugly.”

One day, when she had been volunteering at the shelter for about four years, Sister Mary Alice threw a piece of paper into what she believed was a pile of garbage bags. When one bag moved, she realized that it wasn’t garbage at all, but a person.

“I was frightened and yet smiling,” Sister Mary Alice recalled. “What I thought was garbage was a person. She had a beautiful face, almost angelic.”

In time, Sister Mary Alice learned that the woman’s name was Desda, and that she lived on this particular subway grate where she found warmth from the heat of the train. Seeing her poor living conditions, Sister tried to bring Desda into a shelter, but Desda refused. “‘Do for others,’ she would say to me,” Sister Mary Alice remembered. 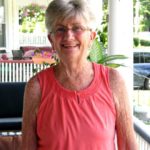 The interactions were routinely courteous, with Desda speaking in short, choppy phrases, until Desda came up with a challenge. On more than one occasion, she told Sister Mary Alice to go to Port Authority to meet some of her “friends.” Apprehensive, Sister Mary Alice made the trek. The person whom Desda described was exactly where she predicted the person would be every time.

“By God, I would go, and the exact person was there!” Sister Mary Alice recalled.

Sister was then able to offer these “friends” help. She brought them to the homeless shelter where she volunteered or she listened to their stories and ministered to them.

As they saw each other day after day, Desda developed a fondness for Sister Mary Alice. She pointed out when she had new sneakers that were similar to those that Sister Mary Alice wore. And, when Sister was faced with a hard decision, Desda was a source of wisdom for her.

Sister Mary Alice had been asked by the Mother General to take a job on a formation team, a position which would have required her to give up her volunteer work at the shelter. She loved her work at the shelter, but she also felt called to accept the new position. As Sister recalled, she was wrought with confusion. So she took a walk to Lincoln Center where, by chance, she encountered Desda.

When Desda asked, ‘Why are you here?’ Sister replied that she had a lot on her mind. Sister Mary Alice then talked to Desda for forty-five minutes, explaining her predicament. Desda listened quietly until, finally, she interrupted.

“She asked a couple of questions, and then she turned to me and said, ‘Church lady. Not so good, church lady.’” Sister Mary Alice recalled. “She said, ‘You believe? You believe? Not so good.’”

And then Desda came out with words of wisdom: “Do both.”

“I used to want to know, ‘How do you live here? How do you sleep?’ And then the underlying question: How does this happen in this country?”

It was the perfect solution. Sister was able to serve on the committee part-time and also continue her work at the shelter. But that was just the beginning of Desda’s magic.

The next day, Sister went to church at Holy Cross, and a person in the back pew yelled out to her and gave her a flyer. Sister took the flyer as she hurriedly left the church, begging the person to be quiet. When Sister Mary Alice got back to her office, she realized that the paper was an invitation to help open up a homeless shelter that would be associated with Holy Cross parish.

“I went and I rang the doorbell at the rectory,” Sister recounted. When the priest opened the door, he was shocked. “He said, ‘Oh my God. The people in the church told me it was going to be you.’”

The “people in the church” were all the people to whom Desda had directed Sister Mary Alice at Port Authority and around the City.

Sister was stunned. She agreed to help open Encore 49 Residence, which eventually became the model crisis shelter for the area. After planning it and opening the shelter, Sister Mary Alice served as the Program Director for seven years. “I loved every second of it,” she said. “You know when something’s right.”

When Sister Mary Alice walked home from Encore 49 on the day it opened, she came across Desda once again.

When Sister asked how she knew, Desda replied, simply, “Spark back in eye.” 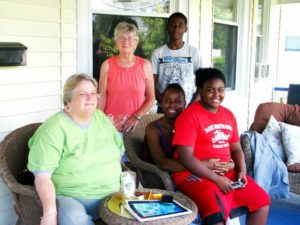 That was the last time Sister Mary Alice saw Desda. When she searched for Desda the next day, no one had seen her. She wasn’t in any of the hospitals in the city. The police had no record of her. Sister continued to search for her unfailingly, and unsuccessfully.

“I got like a cuckoo,” she recalled of her search for Desda. “I was like a nut. I was calling morgues. I was going all over.”

Although Sister never found her, Desda’s influence lived on. Sister Mary Alice went on to open another homeless shelter, and, upon getting the plans approved by the City of New Rochelle, she knew exactly what to name the new space for homeless, single moms. In 2000, Sister Mary Alice opened Desda’s Grate.

The shelter is a two-family house in New Rochelle that Sister Mary Alice purchased along with a Board of Directors. They chose the property because it is close to good schools, colleges, hospitals, and public transportation, but also because the structure feels like “home.”

The house shelters typically seven women, most of whom have children. By giving them a place to stay and helping them to create and achieve goals, Sister Mary Alice hopes to teach these women that they can be successful and independent.

“There’s a lot of programs that will help people like this, but then when the kid grows up, there are fewer,” she remarked. “You have to help the mother and the child. There’s no timeline [for how long they can stay], as long as they’re working on their goals and they’re trying.”

As for Desda, Sister Mary Alice sees this as the perfect tribute to her memory.