A Kid, a School, and a Burning Desire to Revisit Nicaragua 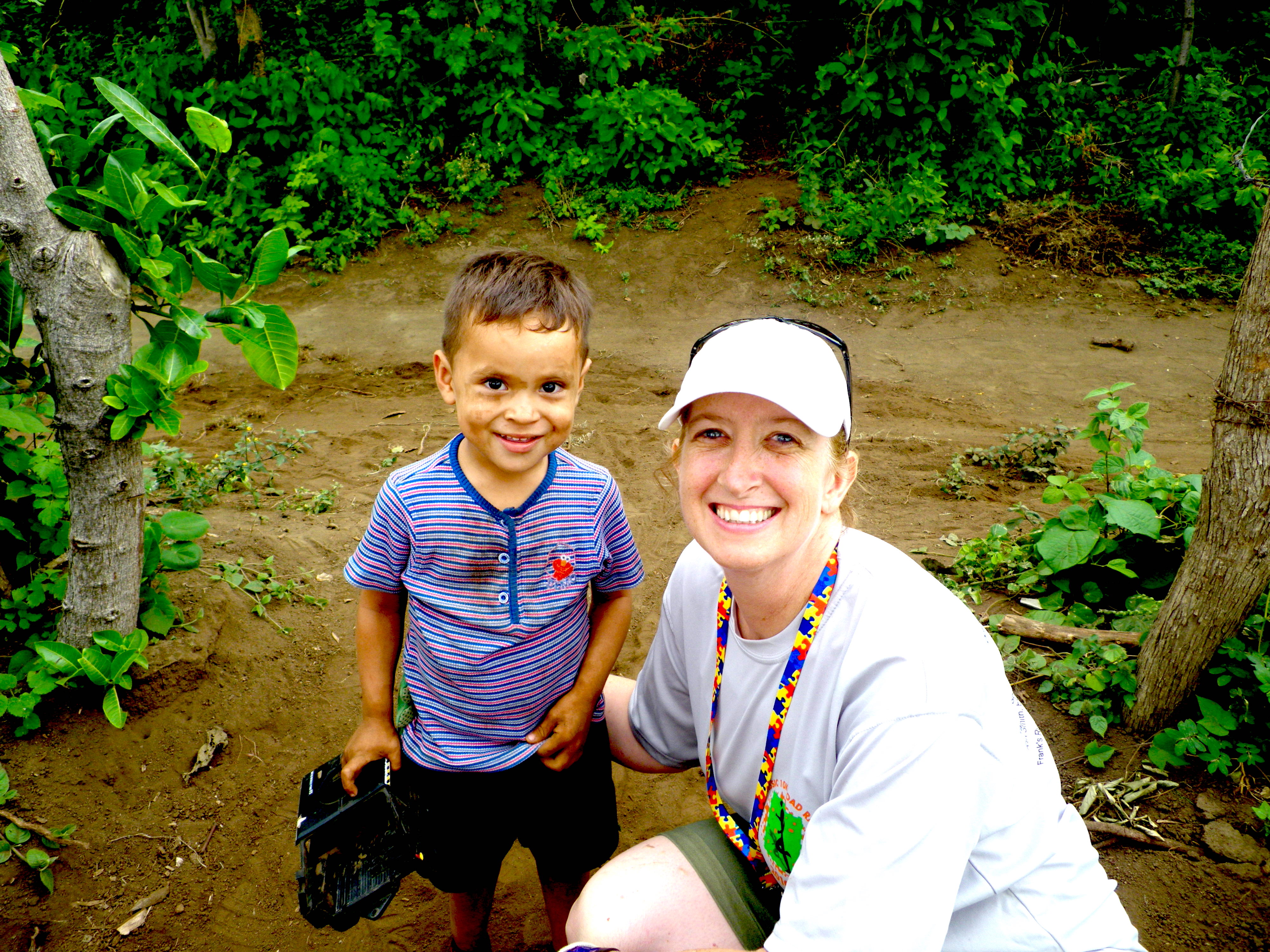 Holly Borzacchiello and Antonio in Nicaragua

Holly Borzacchiello packed anti-inflammatories for her first trip to Nicaragua. A mother of two, she had been working out strenuously, and she needed them for some pain she had experienced recently.

However, a few days later, in a rough shelter with a group of Nicaraguan religious sisters, Holly eagerly gave away the pills. The women in front of her had a joint disease that caused them to be in pain, and they had no access to medication to relieve it.

“When I got there, and I saw the issues with their hands and backs, I gave them my anti-inflammatories,” Holly recalls. “I gave my medicine away knowing that they would not be able to get medicine. At least, maybe this would help them with their joints.”

After working with the Dominican Sisters of Hope for eleven-and-a-half years, Holly’s first North Country Mission of Hope trip, in July 2015 with a group of thirty-six other Mission participants (her daughter and aunt accompanied her on the trip), included making care packages, helping to build shelters, and tending to the needy.

Of course, there were a few outstanding moments for Holly. 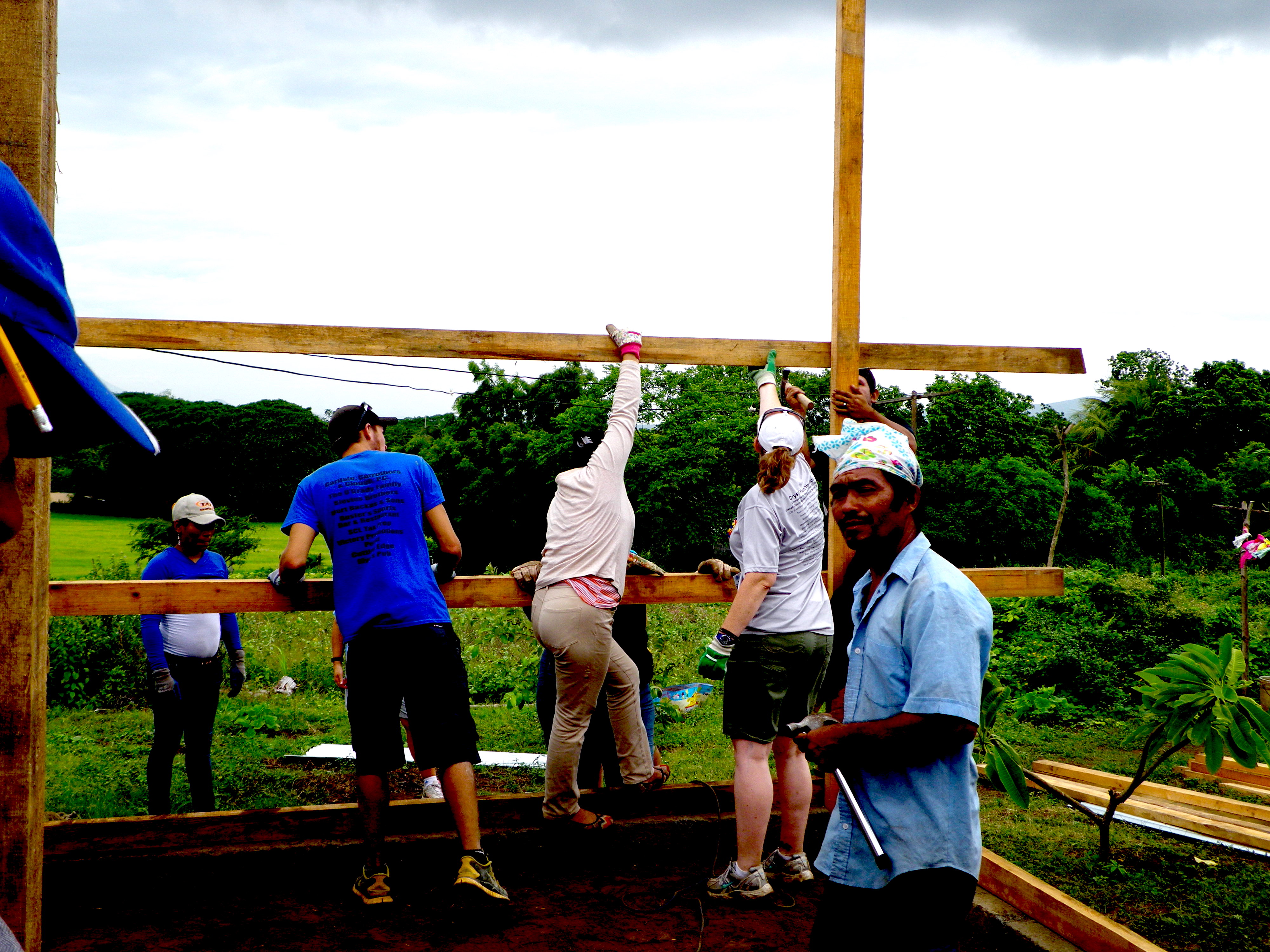 Holly (second to right) builds a new shelter in Nicaragua

While she was helping to build a shelter for the first time, Holly met a ten-year-old girl. She soon learned that the girl was going to school, but her little brother was not yet enrolled.

“I really liked him,” Holly divulges. “He was a little spicy! He was always running around and calling after his sisters.”

On her second shelter build, Holly found out that the boy was not sponsored.

With the Mission of Hope, children need to be sponsored in order to go to school: the sponsorship pays for their uniform, their books, and their food for the school day. In addition, sponsors have the option to send gifts, if they wish.

Holly knew that she wanted to sponsor a child, but it was important to her to meet the child in-person first. In this young boy, she believed that she had found her match. Holly applied with Sister Debbie; the following day, she received approval. 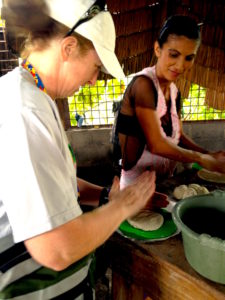 “My daughter and I were thrilled,” Holly says. “When you donate to charities, you don’t always know if your money gets there. In Nicaragua, we literally saw the people receiving the funding. And, if a sponsor was actually there, then they got to talk with their sponsored child. It was gratifying to see that side of it.”

Antonio, Holly’s now sponsor child, will start school this February. But Holly’s work is not done yet.

On the trip, Sister Debbie went out to run a slew of errands everyday. As the Executive Director of Mission of Hope, Sister meets with principals, assesses new communities, and connects with religious throughout her time in Nicaragua. (Sister Debbie is in Nicaragua with a small leadership group, and she is making these moves right now!)

One day, while Sister was out, she and some others from the Mission found a school that was among the worst they had seen in their nearly twenty years of visiting Nicaragua.

“They kept saying how poor the school was, that it was in the worst shape of all the schools that they’ve ever seen,” Holly recalls.

Little did they know, Holly was yearning to get involved with the Mission in a “special,” long-term way.

Holly’s mom had passed away beforehand, so she wanted to do something in her memory. During her time in Nicaragua, Holly searched for a special opportunity. As soon as Sister Debbie returned with news of the school, Holly knew she had found it.

“My mom worked at a special needs school. Right away, I went to my daughter and I said, ‘This is going to be a project for us, because this is something that we can do for Grandma,’” Holly says.

Together with others on that mission trip, Holly formed a committee to raise funds for this school. They hope to implement a cooking facility, electricity, and handicapped accessibility. Their goal is to raise $15,000.

“Right now, I don’t know how lunches occur, if they do occur,” Holly says. “Another school that we saw didn’t have bowls or spoons, and the kids were eating out of their hands.”

Holly hopes to shift that reality, and she hopes to do it hands-on. She’s considering returning to Nicaragua this July to help build and remodel the school.

“As the team works to bring the school up to par, I want to be there hands-on literally helping,” Holly explains. “I feel like if I’m going to do this project, I need to be there for it.” 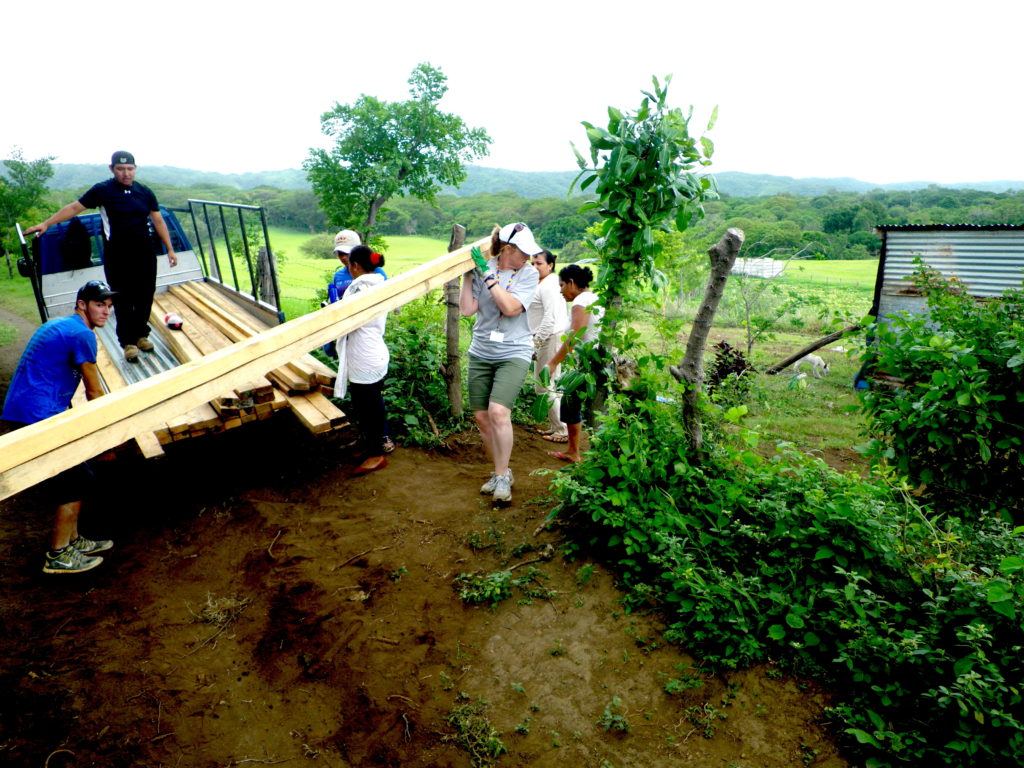 When a truck couldn’t make it up the mountain, Holly and the others helped to carry the wood

Fundraising for, and ultimately building, the school continues to be an ongoing project for Holly. But, when she thinks back to her trip to Nicaragua, she treasures the small moments, as well.

After Holly met the Nicaraguan Sisters and offered them medication, Holly and Sister Debbie left to reconvene with the rest of the Mission of Hope group. It was nearly evening, and they decided to stop to get tortillas for the group’s meal. When Sister Debbie suggested that Holly get out of the car and “see what [the women making the tortillas were] doing,” Holly obliged.

“Three ladies were standing on a dirt floor making tortillas,”Holly says. “One was mixing them, another was banging them out.”

Holly was at once touched by the simplicity of the situation, the poor conditions, and the women’s sheer joy in spite of it all. As they mixed and pounded the warm patties, they were truly happy. Holly was astounded. And then she joined them.

“I was thinking I don’t know how these women do it all day. But it was nice to experience it,” Holly says. “They welcomed me.”

For Holly, it was amazing to see people be happy with so little, and be so appreciative. She quickly understood that the poverty she saw there can’t be compared to poverty in the United States, where basic necessities, social programs, and a slew of charities are accessible. In Nicaragua, people battle a major lack of food, clean water, access to healthcare, and education, and a corrupt government, to boot.

“Still, as a people, they’re very, very happy,” Holly concludes. “I have to say, with the little they have, they’re happy.”

In 2016, and in the years to come, Holly hopes to help make them even a little happier.