Building Hope, One Home at a Time 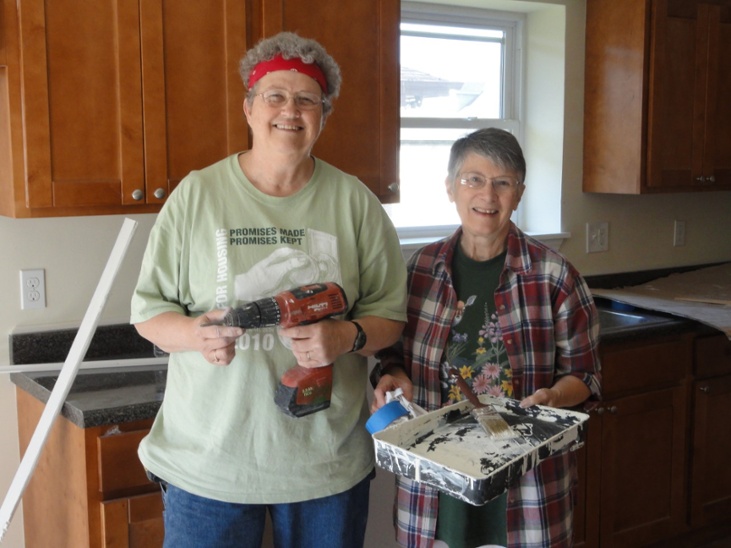 When Dominican Sister of Hope Sharon Yount, OP goes home, she visits her family in southern New Jersey. Her siblings, nieces, and nephews live a mere eight miles from the Salem home in which she and her siblings were raised; the town was surrounded by small farms and, on one end, the Delaware River.

Sister has since lived in multiple states and now lives in New York, but returning to this particular place has meaning for her; here, love and family remain rich. When she says “home,” then, she means it in this greater sense: warmth and traditions and comfort included. She thinks everyone should have the option of having a

home of their own, too. That’s why, when she isn’t visiting family in New Jersey, she spends her days creating homes for those who have lost them or who can’t afford them.

“We all have a place that’s home to us,” Sister Sharon explains. “I feel energized when I’m building homes for others.”

For those affected by Hurricane Katrina in New Orleans, “home” might not seem so appealing. Parts of the city suffered over fifteen feet of water damage, and, in the aftermath of the storm, families were faced with greater poverty, dilapidated structures, and contractor fraud.

Still, eleven years after Katrina, many are still struggling to get back into their homes.

“I would wonder, ‘Why do you want to go back?,” Sister Sharon admits. “But they want to. It’s the place where generations of their family grew up; they all lived in the area or nearby. It’s their home.”

In 1993, after teaching physical education for twenty-two years, Sister Sharon left education in search of a new ministry. She had always been a hands-on person; she loves fixing things and putting things together. She was aware of a national need for housing for low-income populations, and she wanted to use her fix-it, hands-on skills to make a difference. 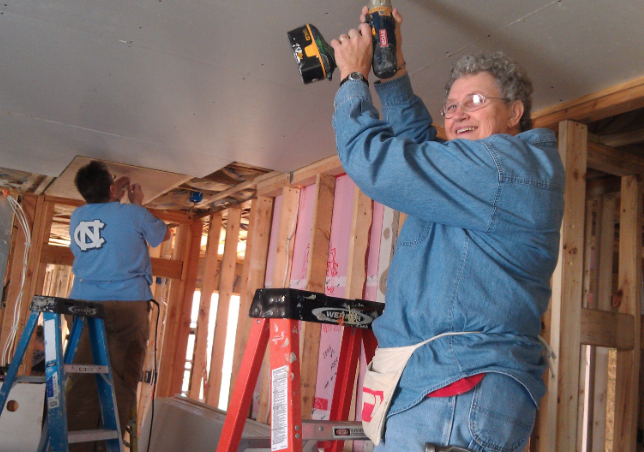 “It just became very obvious to me that there was so much of a need for housing for low-income people,” Sister Sharon says.

Most people who are bothered by a lack of housing don’t respond by building a house. Yet, that’s just what Sister Sharon did. She joined the Homeworkers Organized for More Employment (H.O.M.E.) team in Maine to construct houses for a low-income population there (the community also made crafts and wreaths that were sold in bulk for profit).

Sister Sharon moved into a cabin that had no running water and that used a wood-burning stove for heat (“I learned how to use a chainsaw,” she gushes.) She worked year-round on a team of mostly men to build houses from start to finish, and she “loved every minute of it.”

“We worked in snow. We worked in rain. We worked in cold as well as warm,” Sister Sharon recalls. “People needed homes and couldn’t afford them on their own, so we helped them to have a little mortgage to make it workable.”

When she couldn’t lift something, one of her coworkers would volunteer to help. When she realized she didn’t know much about the electrical wiring of houses, she decided to learn more.

“I like electrical work, and I enjoyed doing it safely,” Sister Sharon says. “I remember telling the electrician that, if a couple of wires ever got put in backwards and caused a fire, I could never live with that. You have to be very careful with electricity.”

Over the next four years, Sister Sharon took courses in Electrician Technology from Eastern Maine Technical College. Soon enough, her one-year stint with H.O.M.E. turned into twelve years. Sister Sharon might have been far from southern Jersey, but she had found her niche.

“We all were helping somebody else to have a place,” Sister Sharon says. “That’s been a key factor in building: you help somebody move a little closer to coming home.”

Sister Sharon left H.O.M.E. in 2005 to be a Site Supervisor and Project Manager for a new girls’ school in Newburgh, New York. With a team, she oversaw the complete rehabilitation of an old building; the structure was raised three feet off the ground and given multiple additions.

Ms. Sylvia rejoices on her new front porch. 9 years after Katrina, Sister Sharon and other volunteers
welcomed her home.

That same year, Hurricane Katrina struck New Orleans. Sister Sharon was able to put her practical skills and passion to use once again. She joined the St. Bernard Project, which works to build homes and provide prompt relief to disaster-impacted citizens and communities such as those in New Orleans.

“I thought to myself, ‘I could do that,’” she remembers.

Sister has gone to New Orleans to participate in a week-long build project called Nuns Build for the past eight years. This November, she plans to return for a ninth trip, this time with Dominican Sister of Hope Diane Trotta.

“You can’t commit to everything, but this is one thing I feel really committed to,” she says.

For her, it’s a way to use her expertise and passion for good.

Although much of the city has recovered, many of the poorest parts, like the Lower Ninth Ward, have not. News coverage of the disaster might be long over, but, for those who were stranded with nothing, returning to their homes is still a struggle.

“For many people who lost their homes in Hurricane Katrina, they want to be home,” Sister explains. “They just need a little help.”

In her time with Nuns Build, Sister has seen a number of “homecomings.” In one case, an older woman was able to return to her family home after years of living with various siblings and family members.

Sister helped to build her home, and supplemented the building with donations from other Dominican Sisters of Hope who were unable to physically build. Sister Sharon might be the construction expert, but she is glad to share the results of her labor. She invites other sisters to join her for the week-long builds; laypeople are welcome to help or to donate, as well.

As Sister says, nothing is better than helping a person return home after years of displacement.

“With building, the end result is always the same,” Sister says. “You want the person or people to have a safe place to live that’s affordable, in which they can feel comfortable and thrive.”

When Sister sees her mission accomplished, she knows she’s done good work. One look at the woman who was able to return home after a number of years safe in her living room, and Sister is happy.

“After our building,” Sister Sharon says, “she was finally home.”