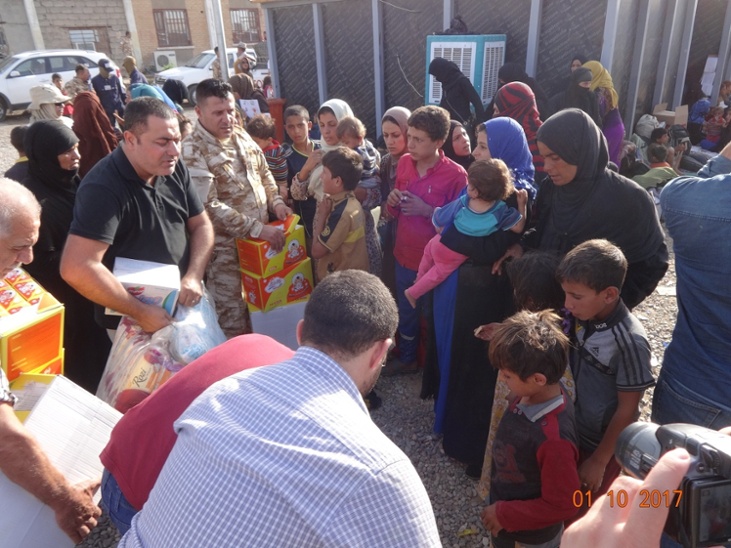 Representatives of the Chaldean Catholic diocese of Kirkuk distribute aid to displaced families earlier this October)in Hawija. The center for internally displaced families is 30 miles southwest of the diocesan center where Dominican Friar Yousif Thomas Mirkis is the archbishop. In spite of the challenges Iraq faces Archbishop Mirkis is hopeful about Iraq’s future.

Three U.S. Dominican women recently cancelled plans for a mid-October visit to Iraq and now watch with concern as events unfold in the Kurdish-held city of Kirkuk, where on Monday, October 16, Iraqi government forces seized oil fields and a military base in response to the Kurdish region’s vote for independence last month.

“We knew the moment the referendum passed that traveling to Iraqi would be difficult, if not impossible,” said Sister Rose Ann Schlitt, a Dominican Sister of Adrian Mich., whose congregation has long-standing ties to the Dominican Sisters of St. Catharine Sienna in Iraq. “Now we watch once again with dismay as we pray and hope this recent military action will not bring more violence and death to the people of Iraq.”

Sister Rose Ann was to travel to Iraq Oct. 11-18 with Dominican Sister Catherine Waters (Caldwell, N.J.) and Gloria Escalona, a lay Dominican woman from Oakland, Calif. The decision to postpone the trip was made by the Iraq Coordinating Committee (ICC) after hearing from the sisters in Iraq that it was not feasible to travel to or within the country at this time. The ICC is a committee of the North American Dominican Justice Promoters.

ICC members have learned from Dominicans in the volatile region that even amid disruption and uncertainty they continue to carry out their ministries and manage to find hope.

Sister Luma Khudher, OP, council member for the Iraq congregation, said the Dominican sisters in Kirkuk were safe going about their ministry and study. Though community leadership asked them to return to Erbil after Iraqi government forces moved into the area, they decided to remain in the city because traveling through the crowded checkpoints could be dangerous.

Sisters in other parts of the country also continue their ministries in the aftermath of a three-year displacement and occupation by ISIS. Until this week it was uncertain what would become of the sisters’ school in the Erbil suburb of Ankawa for children displaced by ISIS. They’ve received word from the Kurdish government that they will be allowed to reopen as long as they do not accept any new students or start a new first grade. A handful of sisters have returned to the village of Qaraqosh and are preparing school for the children whose families have returned there. Other sisters intend to return to other villages and resume their ministries as they are able.

The Chaldean archbishop of Kirkuk, Dominican friar Yousif Thomas Mirkis, also communicated with the U.S. Dominicans about his relief that the situation in his city remained calm.

“After the Mass, I asked the people in the church to pray, that God help us to avoid any kind of bloodshed,” he said, adding that he feels they avoided what could have been a much worse situation. “Now we have less anxiety and we look forward with hope.”

As a reminder that the effects of ISIS’ incursion into Iraq in 2014 are long-lasting and systemic, he said “We are trying to do our best to heal the wounds, helping the victims: children, women, old persons, feeding the IDP’s” in Hawija, a village 30 miles southwest of Kirkuk.

“You can say to our Dominican family in the US, I count on their prayers,” he wrote in an email to the ICC.

Dominicans in the US are determined to keep their fellow citizens aware of what is happening to their family in Iraq.

“While there will be no physical presence of US Dominicans in Iraq for the time being, we are still committed to our solidarity with our Iraqi sisters and brothers and the people of all faiths they serve,” said Sister Marcelline Koch, OP, (Springfield) North American Co-promoter of Justice for the U.S. Dominicans.

News about the delegation can be followed at facebook.com/WeHaveFamilyInIraq2017 and on the DSC website: dominicansistersconference.org.

The cancelled delegation was to have been the fifth sponsored by U.S. Dominicans. There have been other visits to Iraq by individual Dominican women and men from the U.S. in the 18 years since the first delegation in 1999.

The bond between members of the Order of Preachers in the U.S. and Iraq began when Sister Margaret Galiardi, OP (Amityville) heard a report about the impact of draconian UN sanctions imposed on Iraq before the First Gulf War in 1990. “One of the sisters told [then-Master of the Order] Timothy Radcliff ‘Sanctions make us feel that we have been forgotten even by God,’” Sister Margaret recalled. “It was Christmas, the time to celebrate the ‘the Word-made-flesh’ in the birth of Jesus of Nazareth.” Sister Margaret remembers coming to the realization “We have to go there in the flesh and by our presencesay ‘God does not forget anyone.’”

Sister Catherine and Gloria were members of a previous delegation to Iraq in 2001. Sister Rose Anne lived with one of the members of the Iraqi sisters during a period of ministry in Rome.

The Dominican Justice Promoters represent the sisters, friars, and laity of the Dominican Family in the U.S. The DSC represents 6,000 Catholic sisters and their associates across the United States. Funds for the delegation have been contributed by Dominican Sisters, Friars, and Laity throughout the U.S.

For more on Iraq, check out Sister Nancy’s story: