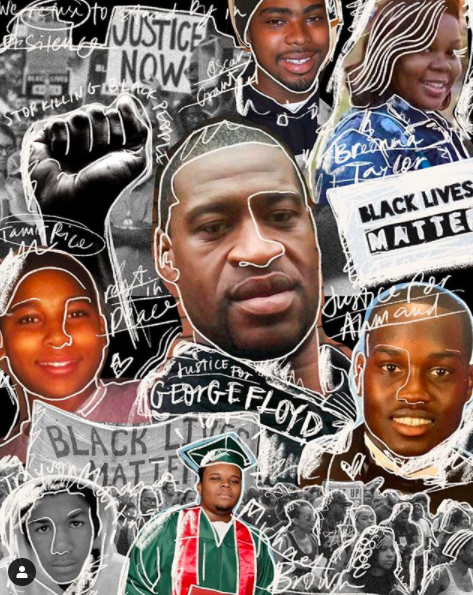 The Dominican Sisters issued the following statement in response to the death of George Floyd.

We are deeply troubled and distressed by the violent assault on and resulting death of George Floyd, an unarmed African-American man, at the hands of Minneapolis police officers. His anguished cry, “I can’t breathe,” as an officer pressed his knee into his neck, harkened back to the cries six years ago of Eric Garner, another unarmed African-American man who died in New York police custody.

His cry brings to mind the long and growing list of African Americans who have been killed, seemingly for no reason other than being black. “Being black in America should not be a death sentence,” said Minneapolis Mayor Jacob Frey.

Our Christian faith tradition holds that we are all one people, one body; each made in the image of God.

In his powerful videotaped sermon, “The Cross and the Lynching Tree: A Requiem for Ahmaud Arbery,” Rev. Otis Moss III speaks of racism as a virus that has infected the spirit and soul of our country. Ahmaud Arbery, a young black jogger and “a man of potential,” Rev. Moss says, “was attacked and killed by men infected with America’s most common and potent viral agent. …The death of Ahmaud Arbery is not an anomaly but a historical pattern of behavior that binds every American to an unexamined history of our nation.”

Rev. Moss powerfully summarizes that unexamined history in his 22-minute sermon. It is a history that we Americans must acknowledge – and then set ourselves on a soul-searching course, powered by courage and love, to make real the ideals of freedom and equality on which our nation was founded.

Killings of Innocent Black Americans by Police:
George Floyd
Breonna Taylor
Ahmaud Arbery (while jogging)
Bothem Sean and Atatiana Jefferson (while in their homes)
Jonathan Ferrell and Renisha McBride (while asking for help after being in a car crash)
Stephon Clark (while on his cellphone in his grandmother’s backyard)
Jordan Edwards (while leaving a party to get to safety)
Jordan Davis (while playing loud music)
Alton Sterling (while selling CDs)
Aiyana Jones (while sleeping)
Mike Brown (while walking from the corner store)
Tamir Rice (while playing cops and robbers)
Charleston9 (while in church)
Trayvon Martin (while walking home with Skittles)
Sean Bell (while leaving his own bachelor party and holding a hairbrush)
Oscar Grant (while partying on New Years)
Sandra Bland (while getting a traffic ticket)
Philando Castille (while lawfully carrying a weapon)
Corey Jones (when his car broke down on a public road)
John Crawford (while shopping at Walmart)
Terrence Crutcher (while his vehicle was disabled)
Keith Scott (while reading a book in his car)
Clifford Glover (a 10-year-old walking with his grandfather)
Claude Reese (while decorating for a party)
Randy Evans (while asking a cop a question)
Yvonne Smallwood (while cashing a check)
Amadou Diallo (while taking out his wallet)
Walter Scott (while running)
Eric Gardner (while struggling to breathe)
Freddie Gray (while lawfully carrying a knife)

For these deaths and all killings of innocent Americans by police due to skin color, we mourn.