Want to Help Babies in Detention? Attend a Baby Shower 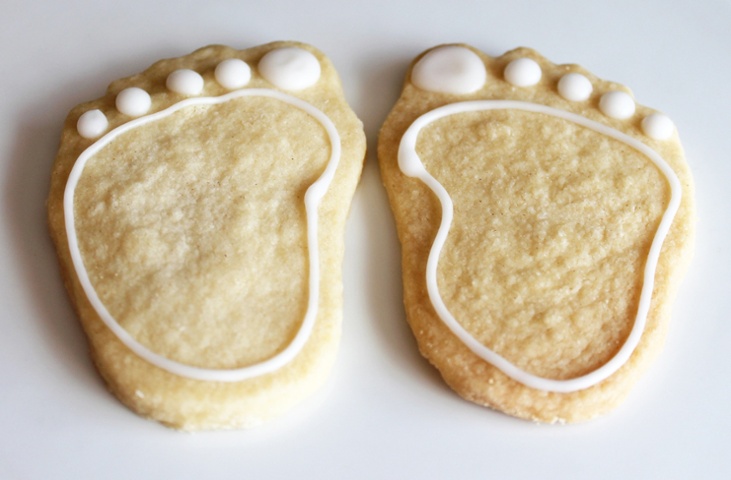 Since 2005, nearly three quarters of a million people, have been prosecuted in our federal courts for the crime of improper migration: 412,240 for improper entry and 317,916 for re-entry. The figures that we don’t see are even more frightening: many of these detained women have babies and toddlers who live with them in detention centers.

The conditions are deplorable: these “baby jails” feature prison-like portable units equipped with multiple bunk beds, heavy iron doors, and are surrounded by fencing. Imagine being an infant or small child who spends a month being toted by your frightened mother across several countries in an arduous search for safety in a new land, only to spend part of their childhood in jail, stripped of possessions like baby blankets and binkies, cut off from all relatives but their mother and young siblings.

To make matters worse, a recent court ruling requires the release of the children but not the parents, which opens the door for families to be separated. 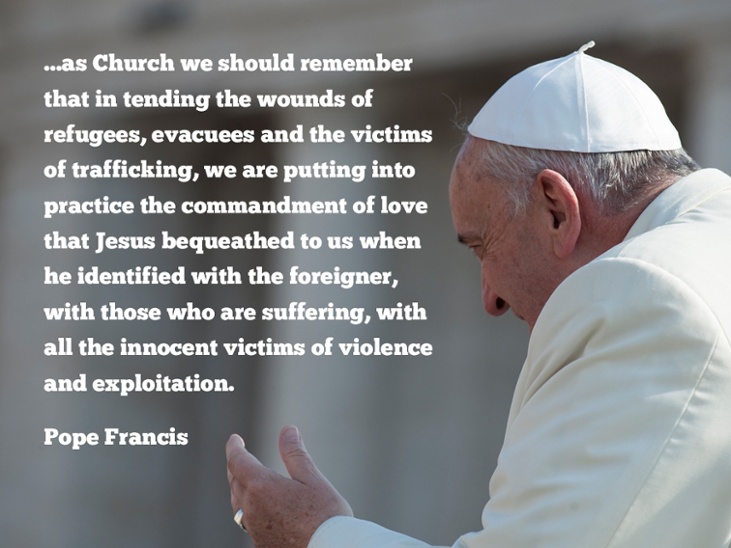 Sister Pat lives in New Jersey not far from the Elizabeth Contract Detention Center, which is one of six detention centers in the state. Three years ago, Sister Pat began meeting with former detainees to learn about detention. To her surprise, the people she met weren’t hardened criminals; they were simply families seeking a better life. 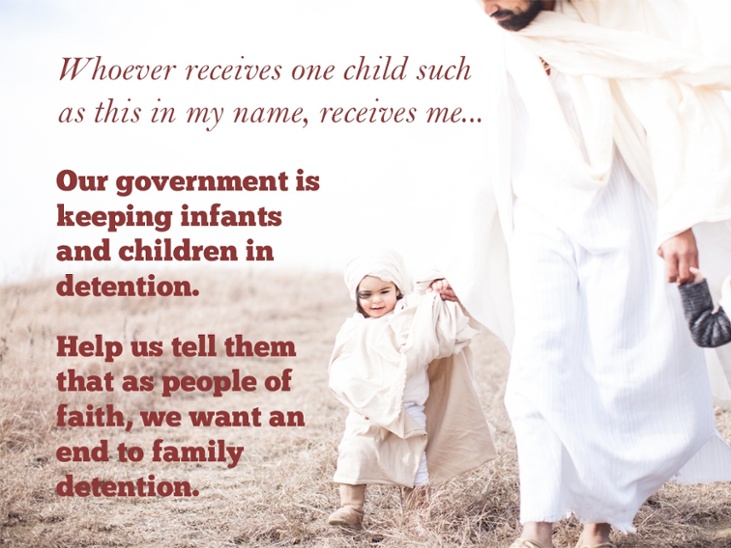 Together with the Dominican Sisters of Hope congregation, Sister Pat has taken action toward immigration reform. The sisters sought to raise awareness of the issue: they worked with legislators and even adopted a corporate stance that vowed to devote energy and resources to the cause.

Now, our sisters are standing in solidarity with the Interfaith Immigration Coalition under the leadership of the Catholic Legal Immigration Network (CLINIC) to create change. From August 29 to September 1, we will support a week of action to draw attention to U.S Immigration and Customs Enforcement’s policy of incarcerating mothers and children.

At the forefront of this effort are “baby showers”—complete with balloons and shower-related trappings— at each of the local Immigration and Customs Enforcement (ICE) offices and detention facilities. These peaceful demonstrations will help alert the public that ICE is holding infants in their detention centers. 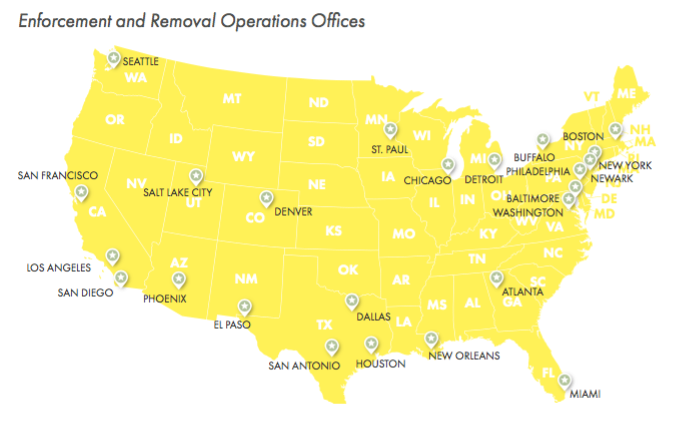 Interested? Below are five ways to help us raise awareness about the continuing scandal of family detention.

1. Attend or Arrange a Baby Shower

Check out Facebook to find people who are interested in arranging or participating in a baby shower in your area. (Not on Facebook? Let CLINIC know you are interested on our sign up form and they will coordinate with you directly.) There are currently showers in Houston, San Antonio, Omaha, Boston, Baltimore, and Corpus Christi, and the list is growing! To make it easier for you participate, here’s a toolkit that includes a script for speaking to ICE, a sample press release for you to alert local media and other items.

If you are not near one of the ICE offices or a family detention facility, pick up a baby shower card at the drugstore, write a message that says “As a person of faith, I ask you to end family detention. No more diapers in detention!” and send it to:

Before you drop it in the mailbox, take a picture of it and tag it on social media with #DiapersInDetention to spread the word about this issue.

3. Send an Op-Ed to Your Local Paper

This one is especially pertinent if you live in a city with an ICE Enforcement and Removal Operations office or a detention center (refer to graphic above). Send a letter to the editor to your local newspaper at fcnl.org/endfamilydetention. Sample text is also avaiable for your use.

Write to your local ICE office asking them to end family detention. Feel free to use the prewritten scripts from the paragraph above. Find email addresses at: https://www.ice.gov/contact/ero.

Use any of the graphics from this article to advocate on social media #diapersindetention. 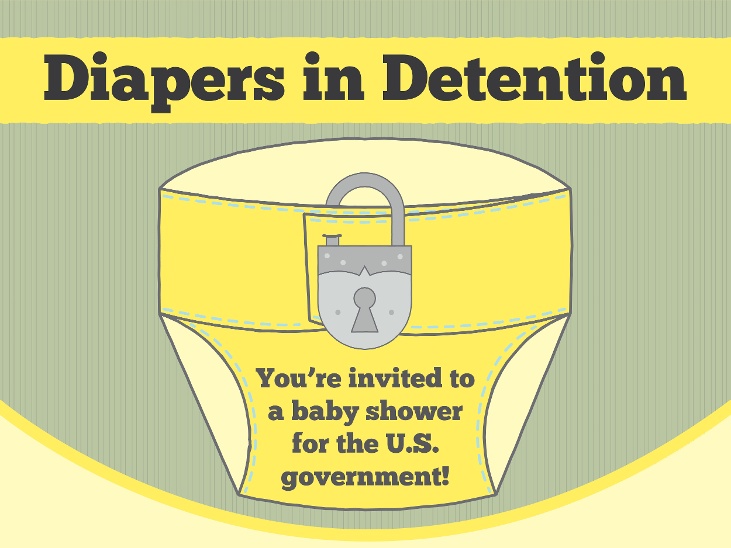 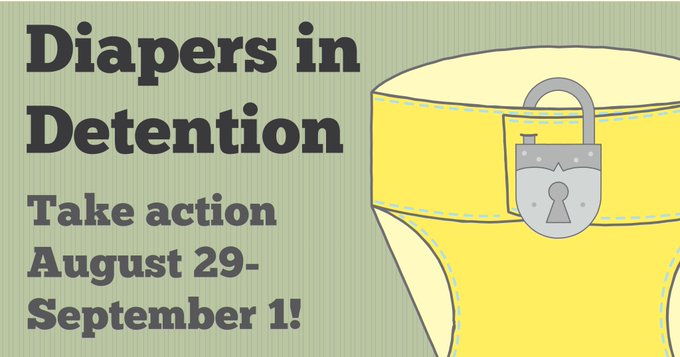