Here’s Your Guide to Engaging in Meaningful Dialogue this Thanksgiving 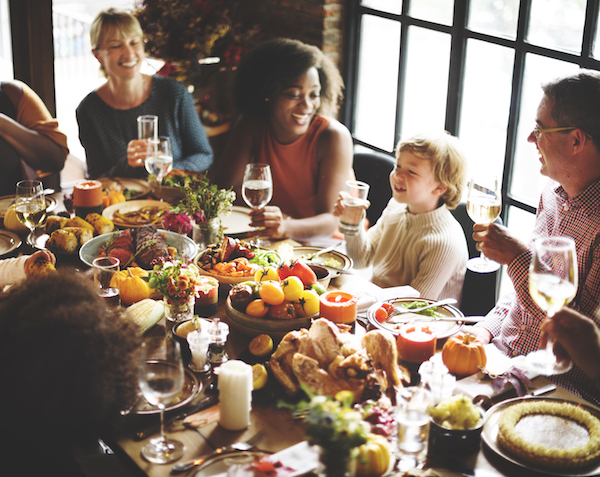 It’s no secret that many of us are fearing conversation this Thanksgiving. In a new NPR/PBS NewsHour poll, six in 10 Americans said they dread political talk at the Thanksgiving table. Four in 10 say Trump is the most likely spark for a dinner-time fight, six times the nearest rival, according to SurveyMonkey.

The answer to coming closer together? Dialogue.

The concept of dialoguing is familiar to Dominicans. When Saint Dominic lived in Southern France among Cathars, he grew accustomed to talking with the people. Even though they held different beliefs, Saint Dominic wasn’t afraid to read up on facts, debate the people publicly, and then pray vigorously for them afterward. Saint Dominic never approached people with violence or threats; instead, he used his smarts and his voice to preach, and, above all, he listened with an open heart.

His model still remains true for us today: we don’t all have to agree, but we have to at least listen. And there’s no better time to do it than the holidays.

Below, we’ve listed five tips on how to engage in meaningful dialogue with those you love, and how to walk away still loving them afterward.

This podcast isn’t so much a guide, but this true story of two people with radically different worldviews coming together is sure to make you think twice about how important dialogue truly is. The folks at Radiolab delve into the concept of humility and show just what’s possible when we approach each other from a place of deep love. We can’t think of a better listen for the ride to Thanksgiving dinner.

2. Stick to the Facts

There’s a case to be made that successful dialogue happens not when we attack people, but, rather, when we discuss facts. Church World Service’s guide to talking to family about immigrants and refugees has facts and speaking points to fuel conversation. Just don’t forget to listen to others at your table, too.

The first step to being heard isn’t talking louder, it’s listening. Listening to others helps others to listen.   NewConversations.net has more :

In learning to better coordinate our life activities with the life activities of others, we would do well to resist two very popular (but terrible) models of communication: arguing a case in court and debating.  In courts and debates, each side tries to make its own points and listens to the other side only to tear down the other side’s points. Since the debaters and attorneys rarely have to reach agreement or get anything done together, it doesn’t seem to matter how much ill will their conversational style generates.

In families, though, ill will is a big deal (especially on holidays). Dialogue is achievable, but deep listening must be central. Focus sharply when your family member talks. Instead of rehearsing your next point, try acknowledging and summarizing the other side’s point of view in your own words when they’re done. It will show that you’re listening, that you understand, and it will serve as a model for them when your turn to speak comes around.

4. Release the Expectation to Agree

Successful dialogue does not equal agreement. Take a moment to reflect on that: we can talk in a meaningful and productive way without agreeing on a single point of view. Agreeing to disagree can, actually, be powerful, as Jonas Gahr Støre, the foreign minister of Norway, says in his TED talk.  Indeed, there’s a case to be made for open discussion, even when our values diverge. Check out the longer explanation on how to communicate across the divide on the TED radio hour.

No one models this better than the sisters. The Dominican Sisters of Hope meet each year at an “assembly”meeting that involves contemplative time, feisty conversation, and even votes about the future of the congregation.

The days are filled with talks, discussion, and learning. But the sisters are sure to leave time for recreation. Whether it’s karaoke, performance, or simple bubble-blowing, the group gets in plenty of laughs.

No matter how heated things get over dinner, you’re still family, too. There’s room at the table for disagreement and dialogue, but there’s also room for fun.