Make No Mistake: the Dakota Access Pipeline is Dangerous for All of Us 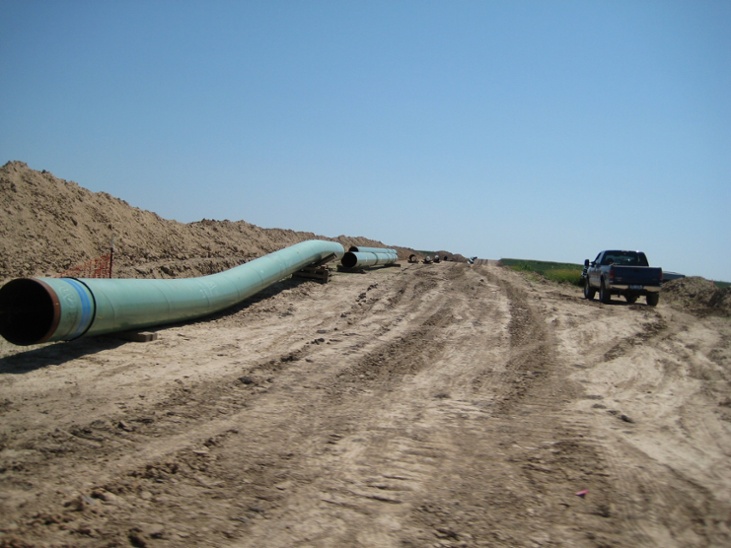 We’ve long posted here about the dangers of fracking. Dominican Sister of Hope Bette Ann Jaster, OP, who is actively involved in anti-fracking advocacy work, wrote this article about the importance of clean water for all of Earth’s inhabitants. As we advocate against the danger of fracking across the country, we stand in solidarity with the indigenous people in North Dakota whose sacred and historic lands and water supply are being threatened by the Dakota Access Pipeline.

Each of us is called to open our eyes, ears, and hearts to see and hear what’s really going on around us. Are we contaminating our life-giving water?

Right now in Westchester County, NY, the forty-two-inch diameter Algonquin Pipeline (AIM, Algonquin Incremental Market) is being dug from Stony Point in Rockland County, under the Hudson River coming up on the other side within 110 feet from Indian Point Nuclear Power facility. Indian Point has gone six years without licensing due to various hazards. Along the pipeline trail are compressors and pigging stations every ten to thirty miles. Extreme pressure pushes fracked gas through this long pipeline, necessarily spewing methane gas which sometimes explodes like in West Virginia last year and in Texas recently. Earth and old growth forests are being sacrificed for the pipelines sake, not for local use but to be sent to the coast to be sold for profit beyond our borders. Locally one station is four-hundred feet from an elementary school. Who is watching out for the children and the forest? 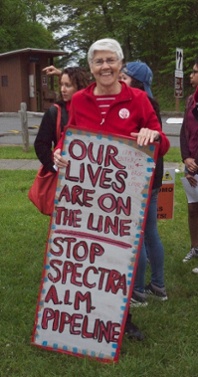 Sr. Bette Ann is smiling, but fracked gas is no laughing matter

Each of us is called to open our eyes, ears, and hearts to see and hear what’s really going on in us and in those around and beyond us. The world and our God are crying out for each of us to wake up! There runs water and blood of all kinds in this world around us. Are we contaminating our life-giving water?

We, the Dominican Sisters of Hope as members of the Dominican Sisters Conference, representing 6,000 Catholic Sisters and their associates across the United States, call into question the assertion that fracking is a safe means of extracting and transporting fossil fuels. We have witnessed earthquakes in places like Kansas, and seen the effects of past spills. In the case of North Dakota, we believe that the Dakota Access pipeline is a threat to Standing Rock Sioux’s Native heritage and their homes. The pipeline will be an ecological disaster for them, as well as for many other farms and communities through which it will pass in North Dakota, Iowa, and Illinois.

We have witnessed earthquakes in places like Kansas, and seen the effects of past spills.

We deplore the reports of violence perpetrated by armed private security forces on peaceful protesters who were unarmed and posed no immediate physical threat. Using biting dogs and pepper spray was out of proportion and an unnecessary attack on innocent people exercising their first amendment rights of free speech.

Pope Francis leads us in our stand for both the sacredness of our native peoples’ lands as well as the sacredness of Earth. We stand with him as he speaks out for those who are institutionally and systematically marginalized. In his encyclical Laudato Si’ he wrote: “Everyday experience and scientific research shows that the greatest effects of all attacks on the environment are suffered by the poorest”(48).

We, the Dominican Sisters Conference, oppose the Dakota Access Pipeline which, if constructed, will carry fracked oil from North Dakota to Illinois, cutting under the Missouri and Mississippi Rivers and endangering, not only the drinking water of the Standing Rock Sioux’s people, but all of those downstream who depend on it. As Lakota Sioux Brave Heart, a 64-year- old Vietnam veteran stated, “This water is just not for us. It’s for everyone and future generations.”