Mission of Hope 61 Gets a Start in Nicaragua 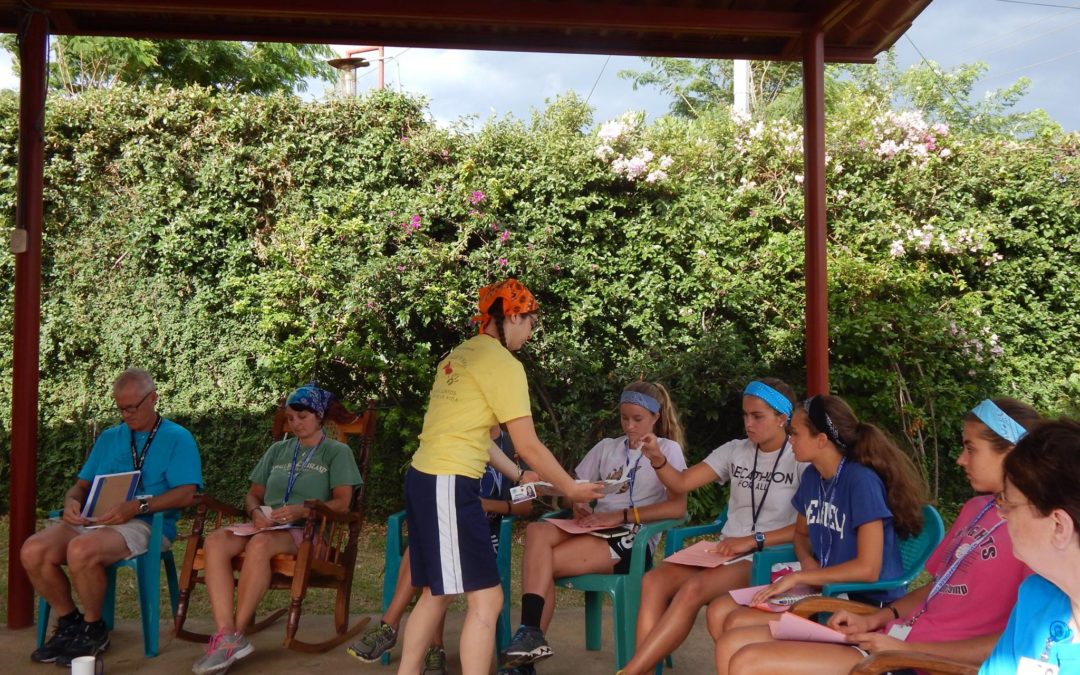 Dominican Sister of Hope Debbie Blow is the co-founder and Executive Director of the North Country Mission of Hope. Yesterday, Wednesday, July 8th, began North Country Mission of Hope’s sixty-first mission trip to Nicaragua. Below, one of the participants shares her reflections on the first day of mission. We will continue to post updates from the group as we receive them. In the meantime, learn more about Sister Debbie Blow’s ministry here.

Our first day together as a full mission! This morning began with a balmy 72 degrees at 5:15am and a projection of a sunny day. But, when it had reached 90 degrees, about 2:30pm, a heavy downpour occurred all around us. That didn’t stop our teams which were out for their afternoon assignments though! It returned to 75 degrees by 4pm.

But, I get ahead of myself…

Our Morning Meeting began at 6:45am with Sister Debbie noting this was the first time that our entire Mission has been in one place at one time. She asked us to introduce ourselves by answering 3 questions: Why are you here? What brought you back (for veterans)? What is your dream as you begin this week? We each chose an answer to one of those questions as we went around the circle introducing ourselves. Among the answers were: “To do small things with great love” (Cecilia), “We are one humanity needing each other” (Oscar), “Here it’s not just money – it’s directly working with people” (Courtney), “My hope is to make this mission last more than a week” (Remy).

Sister reflected on our thoughts and informed us the Dominican Sisters of Hope believe we are each co-creators of Hope in our lives and others’. She noted the inclusiveness of our circle – this time as well as the 60 other missions before ours – having respect for each others’ faith…all are welcome here in our circle. 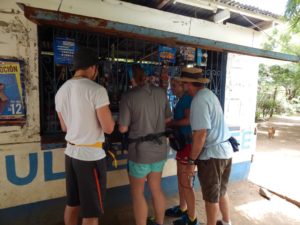 We joined together in a contemporary wording of the Jesus Prayer and Sister asked us to think of our journals this week as our Book of Life. She asked Abi to bring a bowl filled with bookmarks to each of us in the circle – which were face down – and we selected one and took a moment to reflect. “Trust the process,” Sister said. “This is what God wants you consider…go deeper with the words you have received and reflect more visibly, daily, on the person you are.”

She then said, “So many of you voiced you are here because of someone you know and love came before you.” We then listened to Standing on the Shoulders by Joyce Rouse, reflecting on those who brought us here (my personal thanks goes out to Darcie!).

Subsequently, we began the Orientation to this site that has changed since February. We divided up into teams, and began a number of missions.

We sorted and took inventory of the clean linen returned from our spring focused missions. We took a ‘mystery ride’ to the house of a sponsored family to deliver beds and mattresses that were purchased the other day. Although they got a late start building our first home, the team headed up to Monte Verde and Buena Vista to build home shelters donated by the late Ronald Stott.

We painted most of the exterior of the Retreat House soon-to-be Convent at Niño Jesus de Praga.

We had a Medical Clinic in Cedro Galan this afternoon where Sharalyn and Craig Nachbauer saw patients of all ages. 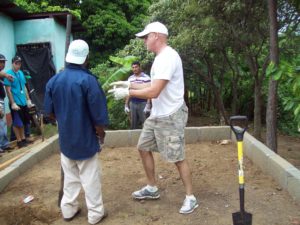 Our Home Shelter Crew returned a bit late from constructing two homes (rather than the intended one), so Craig could go out on a ‘house call’ up to the Flores’ home to look at a student who is here on an archaeological venture and was exposed to too much sun today. That reinforced our constant reminder about wearing sunscreen and head protection

As we gathered for our meeting a bit late, Sister asked us each to sit next to someone we didn’t know too well – yet. She then showed us a beautiful plate with colorful birds on it which Sister Vilma from San Jose Hospital gave us in thanks for all we do for them. She was here for the second time in a few days to get equipment from our warehouse with her team.

Sister then told a few tales of interactions with living creatures in the convent at Niño where she and Sister used to sleep while we were in the Retreat House. She also gave us a little history on Roberto Calderone Hospital where we’re going tomorrow. Two of the hospitals we had been serving (in Chinandega and in Managua) are no longer functional and are unoccupied – and now razed, as of this trip, in the case of the Children’s Hospital.

In May, the team visited this hospital and found it to be in a state of disrepair much worse than the other hospitals we serve – hence, our all day painting crew tomorrow!

Sharing began tonight with Sharalyn who explained that the ‘clinic’ today was held in a person’s living room – they were able to see 40 patients. Having someone do that in their community was quite generous.

Christine told us about the painting at Niño today and Sister mentioned how joy-filled the sisters are with the transformation of the Retreat House from the dilapidated state it had been in when we looked at in February and what renovation has occurred. They showed Sister, Griselle and Carol all the repairs – including their bedrooms. “It was quite emotional for me,” said Sister as she told us the sisters had danced in their rooms last night in celebration. Carol spoke to how fast our supporters sent in their financial support to allow this to happen before the deadline for their move at the end of the month.

Sister then told us about their visit to Fabretto, an expanding piece of our grant projects for the hungry. They discussed partnering on a container shipment and the fact that their first experience with Customs has been that the food was shipped here 3 weeks ago and is 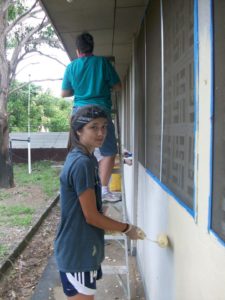 still sitting there. Carol and Sister spoke with a gentleman will allow a section of their warehouse for our food storage of the shipments as we don’t have enough space in our warehouse to hold it. There was wonderful sharing of mutual future actions. With us acting as a sub-partner, they can ship, process and store for us…why wouldn’t we say, “Yes!”

“Our commitment to justice and our level of integrity have consistently allowed our mission to rise head and shoulders above others,” Sister noted.

Abi told us about their Rice & Beans experience today here in Chiquilistagua when they met Magaly’s mother, son and grandson.

Sandy told us about her sponsored family which had been sleeping together in one bed and her desire after February to provide separate beds for the parents and the 2 children. She began a fundraiser food sale on Sunday mornings at the Saranac United Methodist Church beginning right after she returned at the end of February until she came. She was able to raise $1,000 – thanks to the generosity of the congregation. Two of the 5 beds were delivered yesterday to the family sponsored by the Church and the other 3 were delivered this afternoon to her family.

“It’s just so great when you can pull things together and make a difference,” she said.

Holly and Eileen mentioned they were quite excited to get a ‘mystery ride’ today for the delivery of the 3 beds to Sandy’s house. 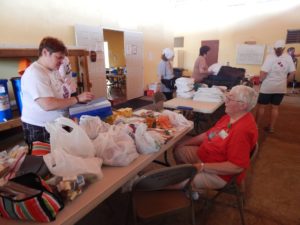 Olivia C. told us her bookmark resonated in her head all day, allowing her to reflect on her great-aunt who was her motivator to come on mission and is no longer with us. She was able to overcome her emotions that she had last time on Rice & Beans, too.

Bill told us that the Home Shelter situation was a typical Nicaraguan day. Somehow, they got 2 shelters built – he thanked his crew for being patient and working in the rain all afternoon.

Greg told us of his enjoyable time with the local crew, even though he didn’t speak Spanish. Lindsay told us about a 10-day-old baby she got to hold for a long time. “It was very peaceful,” she said, “even with all of the hammering outside.” She felt like the babysitter for the neighbors as they came over, too.

“You will exposed to many layers of issues – experiencing it in a different culture, along with extreme poverty,” said Sister. “Look at it as an invitation to make a difference.”

Our closing reflection tonight began with a reading from Romans by Aidyanne followed by a song selection from Abi also about Love and Service. She concluded noting that we are the good in the world for others to see.

Afterwards, some played cards on the breezeway tables while others gathered in the Pavilion and the rest of us were catching up on our paperwork and preparing for tomorrow.