Mission of Hope Brings Swing Set and Hope to Nicaragua 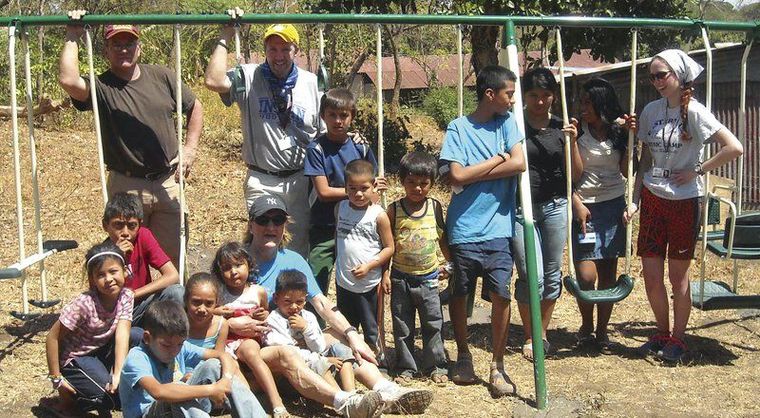 Together with students from the Solano School in Nicaragua, North Country Mission of Hope volunteers (from left) Paul White, Chris Mazzella and Natalie Posner, with Sandy Davidson (seated), gather beneath the swing set they helped build for the school. Photo c/o Press Republican

Reporting in this article first appeared in The Press Republican on Monday, February 23, 2015.
Read the original story at www.pressrepublican.com.

Seven North Country Mission of Hope volunteers struggled to assemble a swing set at a poor school in Nicaragua, fairly stumped by the instructions.

Then their Nicaraguan van driver cast a look over the pile of aluminum poles and other parts.

“His eyes brightened right up; he put his arms out,” said Sandy Davidson via cellphone from the Central American country on Saturday afternoon.

“He knew how to do it. We all worked together.”

And some five hours later, the cement was beginning to set around the base that will keep the green-and-tan structure from tipping over.

“I’d love to be an angel in the sky to see the kids’ faces when they see it,” Davidson said.

The swing set was just one of the projects of The North Country Mission of Hope Group 59.

Sister Debbie Blow co-founded North Country Mission of Hope in 1998 as a direct ministerial response to the catastrophic effects of Hurricane Mitch on impoverished Nicaraguan villages. Sister Debbie and the founding team recognized early on that direct, long-term assistance was vital in order to improve the lives of the people. Working hand-in-hand with local community leaders, she and others 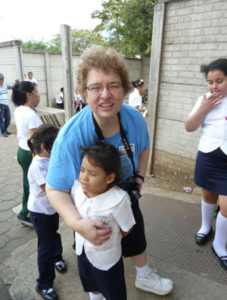 work to empower the people to help themselves through Orphan’s Hope Project, ECO, Education, Community Development and Healthcare projects.

Her work continues today. As the Executive Director of Mission of Hope, Sister is currently leading her fifty-ninth trip over the course of seventeen years to Nicaragua.

This group has forty-three members: twenty-eight of whom have gone to Nicaragua with Mission of Hope before and fifteen who are participating for the first time. Together, they are currently installing swing sets in addition to installing water filters for 118 families and constructing ten home shelters to replace crude shacks for destitute families.

For more on the trip and the participants, visit PressRepublican.com. The group members are also tweeting their trip on Twitter with the hashtag #MOH59; the Press Republican is aggregating the team’s best tweets on its live blog.