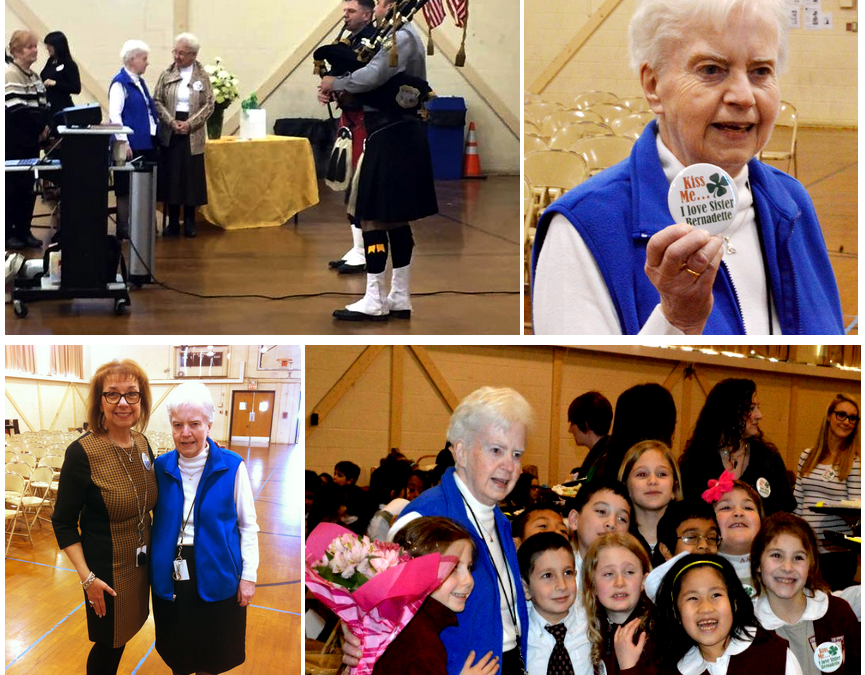 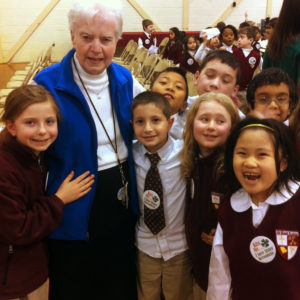 Everyday is St. Patrick’s Day at All Saints Academy in Parsippany, New Jersey. The principal of this pre-K-through-12 school, Judy Berg, credits Dominican Sister of Hope Bernadette Connor, OP, for this high-spirited state of affairs.

Sister Bernadette was born in New York City, but her mom and dad both hailed from Ireland, and her Irish heritage is a dear part of her life. On the occasion of her eightieth birthday in early February, the whole school, from the wee-est pre-K student to the tallest twelfth-grader, gathered in the auditorium to surprise Sister Bernadette with a birthday party.

There were bagpipe players. The whole assembly sang When Irish Eyes are Smiling, and shamrock butter cookies were served. Then the students lined up from the youngest to the oldest and each one gave Sister Bernadette, or Sister Peter, as many know her, a hug and a kiss. Patiently, gently, Sister greeted each student and all the teachers and parents present. It was a lovely and loving event. 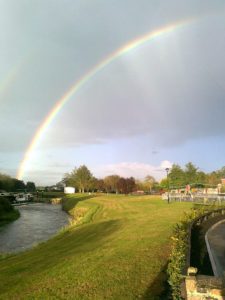 Longford, Ireland, where Sister Bernadette’s
father is from

After earning her BA in Elementary Education from Mount Saint Mary College in Newburgh, NY, Sister Bernadette began her ministry teaching at Saint Anthony School in Hawthorne, NJ, in 1956. She then moved to Yonkers, NY, where she taught at Christ the King School for four years. She was principal at Saints Peter and Paul School in Trenton, NJ, from 1970-73 before her thirty-six year tenure as a teacher at St. Christopher School in Parsippany, NJ. Sister has worked at All Saints Academy in Parsippany since September 2009.

For the celebration, the All Saints School made a video honoring Sister Bernadette, celebrating her history as a sister, her long devotion to education, and her present service. They also included a list, in which they call Sister Bernadette “rock-solid in her commitment to faith, her commitment to her profession as an educator, in loving others and her connections with co-workers and friends, and she is a star, too. She begins and ends every day with a smile and with a twinkle in her eye, and, for that, we love her.”

10) She is good at keeping secrets.

8) Sister Bernadette is a team player and a good sport.

6) She is a New-York-City girl at heart.

4) Sister Bernadette is a nurturer: she is kind and caring and she loves her students unconditionally.

3) She has the unique ability to be identified and answer to two names at once, Sister Peter and Sister Bernadette.

2) Sister Bernadette is hands down the world’s greatest teacher of diagramming sentences.

1) The top reason we love Sister Bernadette is she is our All Saints Academy Official Rock Star, no one else is like her. 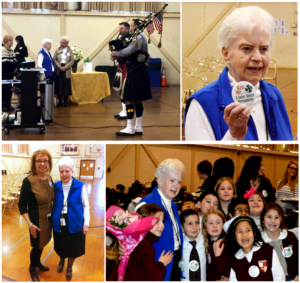 You can enjoy Sister Bernadette’s Birthday Video above; thanks to Judy Berg, Principal of All Saints, for sharing it with us.