Sister Catherine: “We Were Kids of the Sixties” 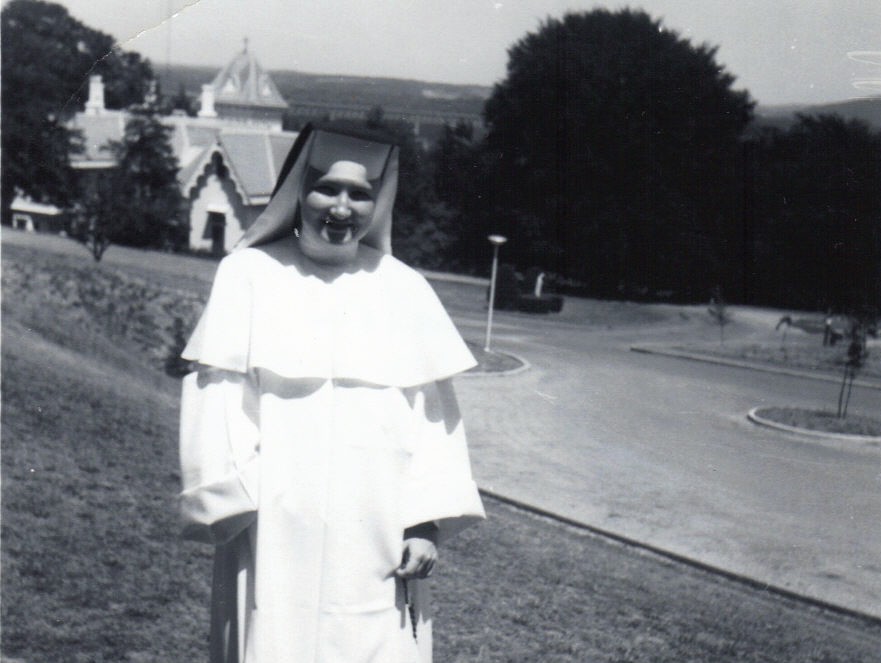 I remember being at Seaside Park. I was sitting on the shore knowing that I was going to be a senior in high school, and I just said, “I am going to be a nun.” That’s it. I wanted to be like those women who were happy and smart, and they were very good teachers and I wanted to teach.

It all worked out. 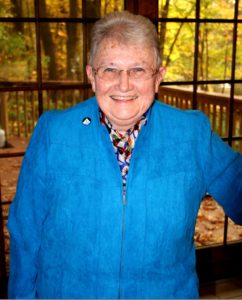 How did you tell your parents?

I just went home and told my mom.

I said, “I think I’m going to join the convent.”

She gave me a Bible before I left, and, in it, my mother wrote, “If this is what God wants from you, to us it appears a wonderful life, and we hope you have a wonderful life.”

Obviously, God’s not mad yet!

There were thirty-two of us that entered that day, August 30, 1963. I used to smoke cigarettes, and, the day that I entered, I stood on the porch at Guzman (at Mount Saint Mary College) and smoked what I knew would be my last one. I threw it over the side, and then I entered. I’m sure it’s still buried there in Guzman.

The group I entered with were wonderful women. We became very good friends from the very beginning. 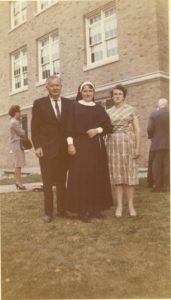 Even though you couldn’t talk?

We could talk. We probably weren’t supposed to, but we did. Although we loved the congregation, some of the rules just didn’t make sense to us. Now, the silence at night and the prayers did, but some of the others just didn’t make sense. So we tested them, all the time. The Postulant Mistress was teaching in another building all morning and we were supposed to be doing chores, but, while she was out, we had coffee breaks. (We weren’t supposed to have coffee breaks.)

See, we were kids of the sixties. We weren’t big on all these rules.

In the second year when we entered, the Novice Mistress was very rigid. She was a very good person, but she just was very scrupulous, too scrupulous for that job with young people. It was the rules that were important. And we were very bad in her mind, because we questioned the rules. Well, one day, I got into a little problem with her.

I was delivering trays to the infirmary, and one of the sisters fell. I had to get another sister, finish delivering the food, and then, by the time I ate my own lunch, I ended up getting to the laundry late. The Novice Mistress was scolding me for being late, and I was trying to explain to her that I didn’t do it purposely, but she got really angry.

So then she sent for me. (We used to call them closed-door sessions, meaning that, if you got called to her office and she closed the door, you knew you were in trouble.)

She said, “You should have never been late.”

And I said, “If you’re telling me that we have to choose between charity for someone and the rules, then I will choose charity. If you don’t like that, you can send me home.”

And she never bothered me again. She never yelled at me again and I never got in trouble. I thought I was going home that night; I thought she was going to say, “You’re out of here!” But she didn’t. I stayed in the novitiate through student teaching, and I finished my degree.

Sister Catherine with her parents

My first mission was Deal, New Jersey, which I really loved. I was supposed to go to Scarsdale, New York, and we had big trunks. (I was in full habit.) At that time, you packed your trunk and they shipped it wherever you were going to go.

The day before Labor Day, I had been helping out at the seashore, and Mother Leo Vincent had sent for me. She told me that my placement was changed. I was not going to Scarsdale as I was previously told; I was going to the shore area. So, my trunk’s in Scarsdale, New York, but I went to Deal, New Jersey. I got there, and the Superior said, “You’re going to have the fourth grade.” I took a deep breath (I was trained as a junior high teacher), but I said, “That’s alright; I can do fourth grade.” I set up the whole fourth grade classroom.

Well, were they really that bad?

So this was an exceptionally bad class?

That’s what she said. And they couldn’t change classes—that’s how she was going to punish them. The sixth, seventh, and eighth grade were supposed to change classes and different teachers taught different subjects; I was going to do social studies. But she wasn’t going to let them change. So now I’m self-contained with fifty-five bad seventh graders. And I have to teach everything. Every single thing.

The first day of class, they were very rambunctious. And I just said to them, “Okay. Let me explain to you what’s going to happen. We can have a good time, but you’re going to pay attention to me. Or you’re going to write out what I was going to teach.”

So, every time they got disruptive, I just put the assignment on the board, and, if we were going to do chapter one in social studies, they had to write chapter one out, every single thing. It only took me a week. If they didn’t want to do something, all I had to do was pick up the chalk and that was end of it. And we had fun; we had a good time. They were good kids; it’s just that the inmates were running the asylum.

When I taught poetry, I used all of the songs of the time. I would mix Simon and Garfunkel with Emily Dickinson, and we just played with that and saw how the poetry was the same and different. 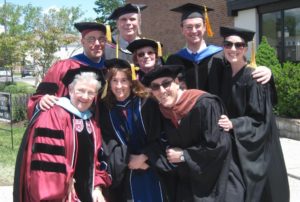 Why did you use pop music to teach?

Because the students were into it. That’s what they knew and understood. Then you share their love of whatever that piece of music is, and you say ‘Now let’s look at this; this is music to somebody else’s ears but it’s not been put to that kind of music. This song tells a story, but what story does this poem tell?’ You begin with what people know.

There’s a nice story that comes out of that: Sister Margaret Anderson came up to me years later and she said, ‘I have a friend who had you in seventh grade in Deal, New Jersey. She said she remembers you because she remembers that you taught her a love of poetry by using Simon and Garfunkel.’

This woman now teaches English at the community college. Well, one day, she’s on line next to another woman who teaches at the community college. So one girl says, “How did you get into English?” and the other answers, “I got into English because my seventh grade teacher taught us poetry with Simon and Garfunkel.” The other girl said, “Well that’s funny; I got into English because of my seventh grade teacher who taught me in Bishop Dunn.”

They both had me in seventh grade.

Sister Catherine is now serving on the Dominican Sisters of Hope Leadership Team. For more about her on our site, including her recently published letter on climate change, click here.