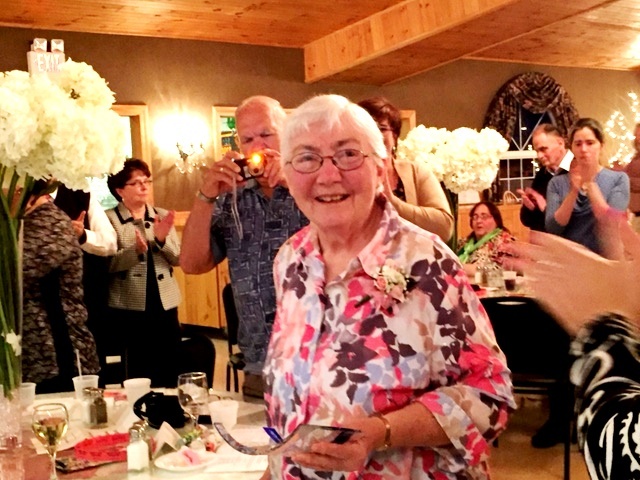 The “Caring for Others” award bears no small name. Given annually by the WoodmenLife Chapter 462 based in Chazy, New York, the Lifetime Achievement Award honors recipients’ commitment to serving those who need them most. This year, Dominican Sister of Hope Stephanie Frenette received the award.

Sister Stephanie knew that she wanted to be a Catholic Sister ever since she was a young girl. When she entered religious life after graduating high school, she became a teacher, and an enthusiastic one, at that.

“Some of the girls that I entered with would say, ‘Oh, maybe we’ll have a snow day and we won’t have to go to class tomorrow,’” Sister remembers. “And I’d say, ‘I hope we don’t, because I like to go to school!’”

During her forty-one-year teaching career, Sister Stephanie never refused a student from her classroom, no matter how many times the student had been kicked out elsewhere.

“I taught one little boy in particular who had been kicked out of five-to-six different kindergarten classes,” Sister remembers. “I always enjoyed taking the children who were labelled as ‘problem children.’ I remember saying to different principals, ‘Let me have that child for a bit, and let me work with him or her.’ I always felt that was very important.”

Over the years her students have included Dominican Sister of Hope Debbie Blow, as well as eight young men who went on to the priesthood, and one who is currently serving as Bishop of Ogdensburg, Bishop Terry LaValley. 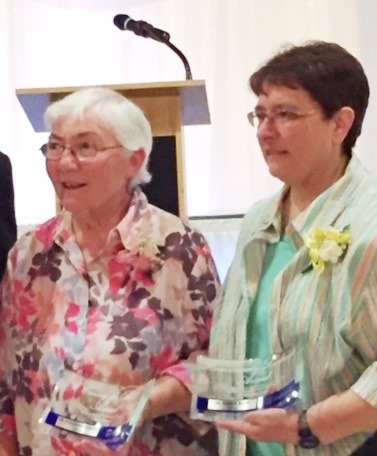 Sisters Stephanie (left) and Debbie with their awards

However, since she retired from teaching in 2002, Sister Stephanie’s ministry with children has taken a new turn. In 1998, she went to Nicaragua; her trip ultimately helped inspire the Plattsburgh-based nonprofit North Country Mission of Hope.

After getting to know students in America who came from Nicaragua and helping to raise funds for their families after Hurricane Mitch, Sister Stephanie knew she had to make the trip.

“I just felt that I had a special call that I needed to help these people,” she remembers.

When her physical abilities could have been a hindrance, Sister Stephanie persevered. Seven surgeries later, her participation in North Country Mission of Hope hasn’t dwindled. Sister Stephanie still makes two trips each year to Nicaragua, where she assists and guides the kitchen staff and works with disabled orphans.

“In my bedroom, there’s a photograph of me with a young girl in Nicaragua,” Sister Stephanie says. “I had handed her a little box of cookies, and she had no idea what to do with it. I tried to explain to her that it was food, but she didn’t understand. Finally, I broke one cookie in half. I gave her half and I took the other half and put it in my mouth to show her that the cookie was something good to eat.”

“Every day when I wake up, I wonder what that girl is doing today, how old she is, if she ever got any schooling. On my flight back to the United States after meeting her, I just sat in my seat and wondered how it was possible that people there were even surviving with such little means. I grew up in Detroit, and my family wasn’t wealthy. But I had never seen poverty like that.”

In addition to her direct service, Sister Stephanie serves on the Leadership Board of North Country Mission of Hope (Dominican Sister of Hope Debbie Blow is the Executive Director). The position has allowed her to help give aid to the communities served by the Mission without dictating their future.

“Ever since we started The Mission, we’re very careful not to tell Nicaraguans what they need, or to say, ‘In America, we do it this way.’ Instead, we’ve let them take the reins and grow,” Sister Stephanie says. “Every time I go down to Nicaragua now, I’m awed by how far they’ve come.”

Sister Stephanie was also awed when, last month, she learned she was the 2016 recipient of the WoodmenLife Caring for Others award. At a dinner banquet, Sister was met with friends as well as Sister Debbie Blow, who received the WoodmenLife Chapter 462’s 2016 Outstanding Citizen of the Year award.

Though the award came as a surprise, Sister Stephanie admits that it was a pleasant one.

“It was a very, very special event,” Sister says. “I was just blown away.”