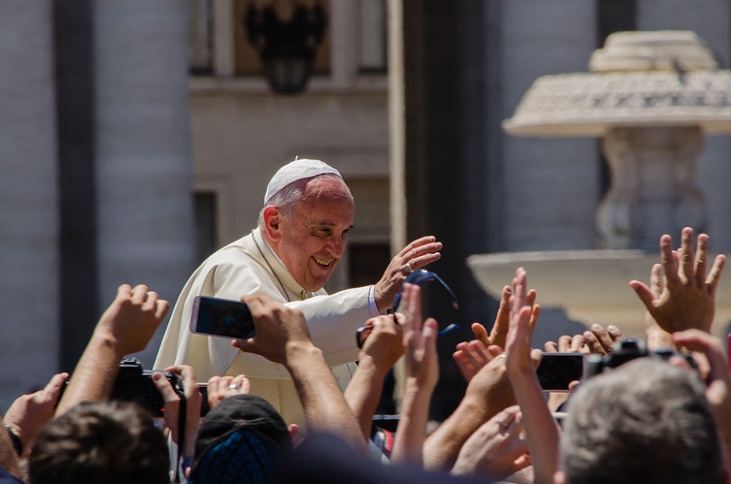 For the past week, news sources have been abuzz about Pope Francis’s announcement to create a commission to study women deacons. It’s an initiative worthy of talk, but there’s more to the story.

Sister Lorelle Elcock, OP, Prioress of the Dominican Sisters of Hope, was one of the 900 women religious present when the Pope made the announcement. Sister was in Rome for the UISG (International Union of Superiors General), a worldwide, canonically approved organization of Superiors General of Institutes of Catholic Women Religious meant to promote collaboration among congregations and provide a formal connection to the Vatican. Together, the 900 leaders represented 500,000 women religious across the globe.

The audience with the Pope was only one morning of a five-day “Plenary Assembly.” However, for the group of women religious, it was significant.

Whereas previous popes have not always met with the triennial gathering of women religious leaders, Pope Francis not only met with the group, but he structured the 90-minute audience as a public forum during which he answered pre-decided questions from the group.

While Sister Lorelle admits that the initiative to create a commission to study women deacons is hopeful, she notes that there is one aspect of the audience she would have liked to have seen garner more news coverage: Pope Francis’ commitment to involve women in decision-making in the church.

According to National Catholic Reporter, Pope Francis said that the integration of women into the life of the church had been “very weak,” and said: “We must go forward.”

The pope noted that the Vatican’s Pontifical Council for Justice and Peace has a woman serving as its second-in-command and said he wanted to appoint a particular woman to a similar position in another office but that she had been preferred to serve elsewhere.

“For me, the elaboration of decisions is very important,” said the pontiff. “Not only the execution, but the elaboration; namely, that women, whether consecrated or lay, are inserted into the process of the discussion.”

“Because [a] woman looks at life with true eyes,” said Francis. “We men cannot look at it so. The way of seeing problems, of seeing whatever thing is totally … different than men. They have to be complementary. In consultations, it is very important that women be there.”

Although Pope Francis didn’t detail exactly what greater involvement from women would look like, Sister Lorelle understood this to mean more participation in “roles within the institutional church.”

“I would assume Pope Francis meant women being invited to synods and commissions,” she said. “And not just sisters, but all women — lay or religious — with qualifications.”

Perhaps the UISG audience was a start. Instead of offering a formal speech, Pope Francis asked for the questions to be read one by one and responded to each patiently, creating a “conversational and kind of unique” tone that impressed Sister Lorelle. She admits that the Church might have a long way to go in the way of necessary change, but leaders of women religious dialoguing with the pope was a step in the right direction.

“I felt pleased that he was at least affirming or recognizing the questions of the day from women,” Lorelle said. “I think it was a positive feature and a much more personalized, friendly approach than him just giving a formal address to the audience.”

And, as Pope Francis continues “kind of breaking all the rules,” there is hope for what might come next, especially for women. He’s not quick to make changes, but, according to Sister Lorelle, Pope Francis is paving an optimistic path.

“He emphasizes discernment,” she said. “He used the word quite a bit during his responses. I do think that, rather than just dismissing the question of women in the church, he’s saying, ‘Let’s study it. Let’s discern.’”

When it comes to theology and the Church, many have long been waiting evolution. It’s clear that change entails an arduous process; yet, hearing an openness to discernment from the pope certainly sounds like a favorable first step.

This piece first appeared on Sojourners.net.