“They’re Not Unlike Us”: Meet the Prioress Helping Refugees in Kurdistan

When Sister Lorelle Elcock talks about Iraqi refugees, she tears up. The prioress of the Dominican Sisters of Hope, Sister Lorelle is normally even-keeled, but she concedes that talking about the people who have left everything they knew to flee from ISIS really gets to her. 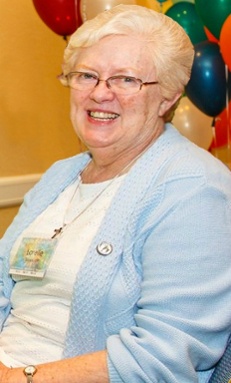 The situation hits close to home, as a community of seventy-three Dominican Sisters is among the refugees. This past May, while she attended the General Assembly of Dominican Sisters International, an organization of Superiors General of Institutes of Dominican Women Religious held in Rome, Sister Lorelle met with the prioress of the Dominican Sisters of Saint Catherine of Siena. The Iraqi Prioress, along with another sister from the congregation, described what their situation has been like.

After capturing their homes in Mosul and the Plain of Nineveh in Iraq, ISIS gave Christians three choices: to convert, to pay a protection fee, or to die. The Dominican Sisters of Saint Catherine of Siena, along with thousands of other refugees, chose none of the above, and instead fled.

“On August  6, 2014, we left our towns in the Plain of Nineveh fearing that we would have the same destiny as the Yazidis,” the sisters wrote in a presentation to the Dominican Prioresses in Rome.

In an article that describes the Yazidis as “hunted by ISIS,” The Guardian reports that “roughly 40,000 Yazidi people – many women and children” are currently held hostage by ISIS. The extremist group is notoriously killing Yazidi men and raping women as young as nine years old.

The Dominican Sisters of Saint Catherine of Siena were able to escape; however, the move was laden with problems. Their Kurdistan destination, Erbil, was not big enough to receive all of the refugees: the sisters report that “the number of the internationally displaced persons who came to the Erbil/Ankawa region was ten times bigger than the number of the residents.” 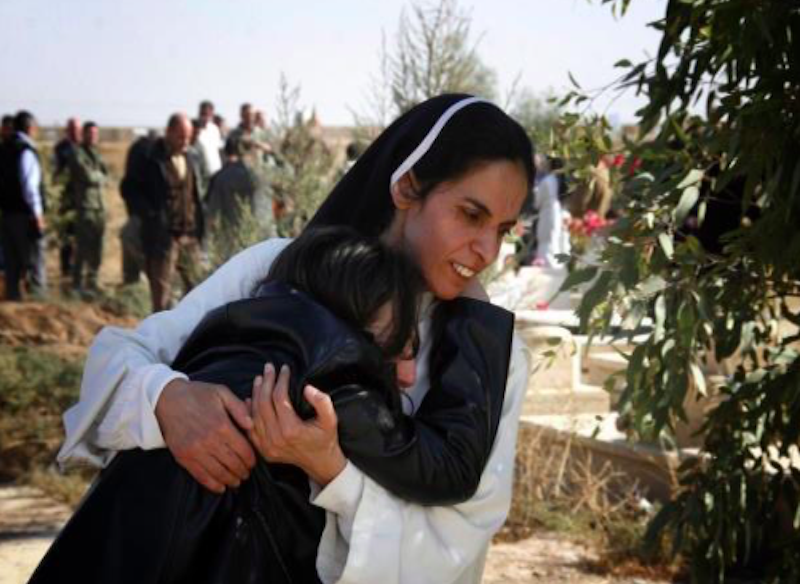 One of the sisters helps another refugee 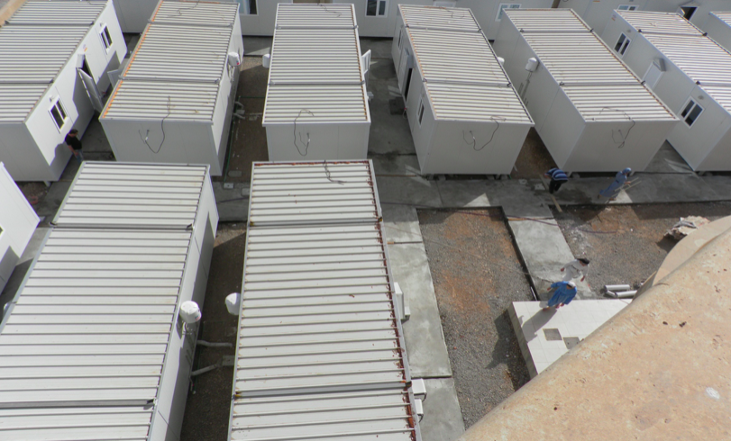 The caravans in which the sisters and many refugees live

So, the sisters split between living in a convent and a church before resettling in caravans that were established in the backyard of a convent.

Unsurprisingly, leaving their homes, not having their belongings, and living on an excruciatingly tight budget has taken its toll on them. Sister Lorelle shares that the community has had a number of deaths of older sisters as a result of the trauma. And, of course, they’re unable to pursue new vocations, which was previously an active ministry for them.

Sister Lorelle, for her part, is anguished.

“If we all had to flee and leave on short notice with what we could carry with us, to me, it’s like, how do you even comprehend that?” she questions.

Here’s the remarkable part: in spite of their dire situation, the displaced Dominican Sisters have gotten right to work. Upon arriving in Kurdistan, they began ministering to other refugees by organizing and distributing non-food items such as blankets and refrigerators, teaching classes, offering Bible studies, and trying to give families and children some semblance of normal life. 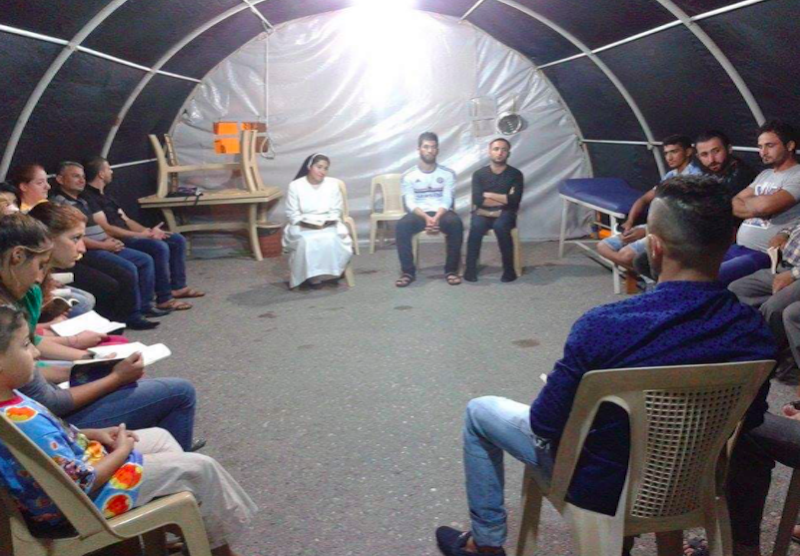 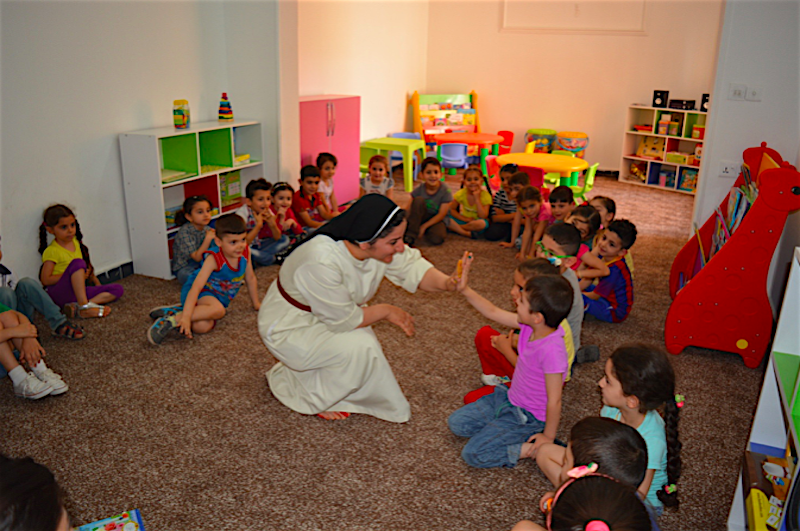 The sisters opened a convent on the outskirts of Erbil in order to live among the people, and they founded a primary school to educate young refugees.

Next spring, they anticipate preparing another five-hundred students to receive the Sacrament.

“They’re still very committed to a pastoral approach,” Sister Lorelle says. “The number of First Holy Communion recipients is another indication of how many Catholics are in these refugee camps; it’s some indication of the scope of the displacement of these people. That’s just one age group.” 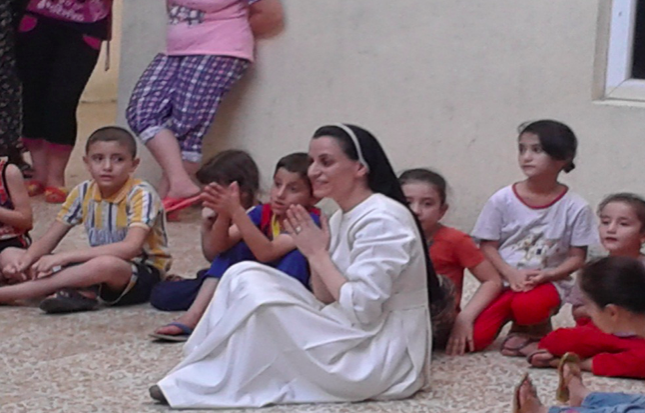 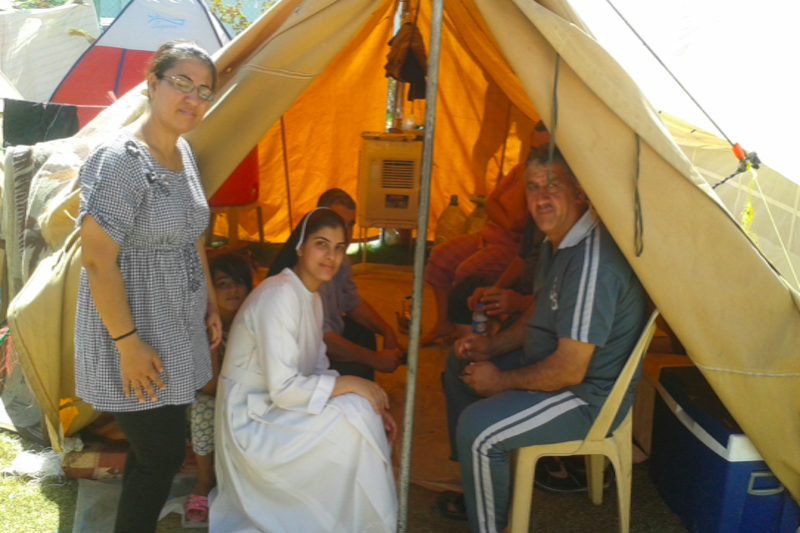 Sisters pray with and visit refugees

According to Sister Lorelle, the sisters are not asking for anything for themselves. With the help of various humanitarian organizations, they have food and housing, and they’re able to live modestly. However, the Iraqi sisters are looking for help in providing bus transportation for the children to be able to attend religious education classes.

Upon hearing this, Sister Lorelle sought to help. She connected with a group at her local parish who were hoping to help with the refugee crisis but weren’t sure where to start. 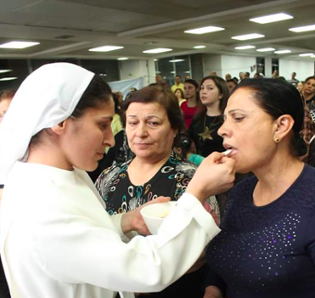 “A parishioner asked me if I knew any organizations [who needed help], and I responded by that we as Dominican Sisters have been especially concerned about the Christians who fled from Mosul, Iraq,” Sister Lorelle says.

Since November, she has been corresponding with the parish group to inform them about the issue, serves as a liaison to the Dominican Sisters of Saint Catherine of Siena, and assist with a collection that will be taken later this summer. Sister Lorelle lives half a world away from the Dominican Sisters who are now refugees, but, as a fellow Dominican Prioress, she can’t help but relate to their pain.

“When you’re with these women, you feel like their life was not unlike ours,” Sister Lorelle says.

“That’s what I find so touching: even though it’s a very foreign culture,” she continues. “They are Dominican women living the Dominican life doing the same kinds of ministries that we would do in the U.S.. I just can’t even imagine what it’s like to be uprooted as they have. The sisters are trying to provide as much normality as they can muster at this point in time. But it’s still not their home. It’s not  a place where they have a real sure future.”

If the sisters are able to gain the funding they need in order to provide religious education to the refugee community, perhaps it will be a glimmer of hope for them. Indeed, when Sister Lorelle met with the Prioress of the Dominican Sisters of Saint Catherine of Siena, she was presented with a narrative of “sorrow and hope.” In spite of the enormous heartache they’ve endured, the sisters hope to eventually go back to their homes in Mosul. And, while they’re getting humanitarian aid —and Sister Lorelle is striving to help more— Sister Lorelle wants them to know, above everything, that they are not alone.

“Mostly, [I’d like to] let them know that there are people who are aware of their situation,” Sister Lorelle says.  “We are concerned and supportive. We want to help them maintain courage and hope for the future.” 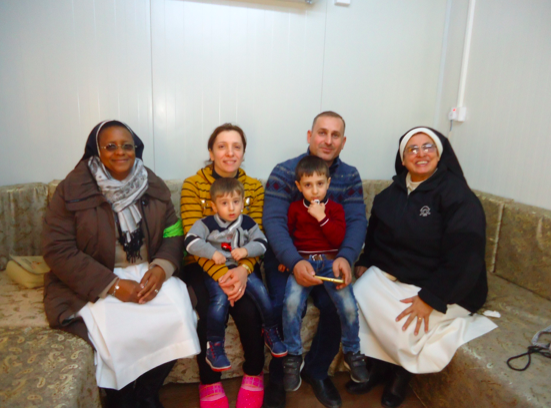