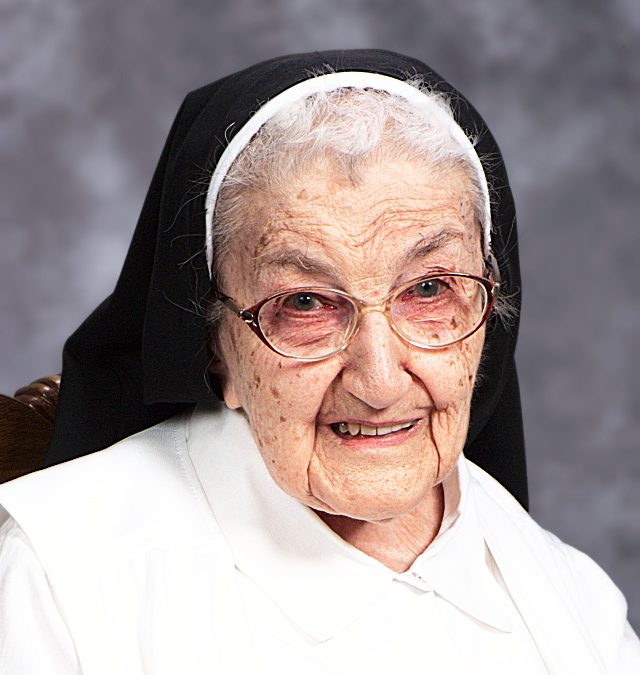 How did you know you had a vocation?

Growing up, I always wanted to be a Sister. And if anybody says, “How come?” I can’t say how come. It was just something that I felt. But I never really thought it would materialize.

When did you enter the convent?

I wanted to enter when I finished high school (I was only sixteen-years-old), and, at that time, the ex-Mother General kept telling me I was too young. So I worked in New York City for an insurance company for nine years. But, even though I was working, and I enjoyed what I was doing, I wasn’t really satisfied. I would do things like go on vacation with my sisters, and, in about three days, I’d be bored to death! Finally, I took the bull by the horns and I said, “I have to go to the convent!”

What did your parents say?

In the beginning of 1941, I had made up my mind that I was really going to go into the convent. Well, my father died Thanksgiving Day of 1941 (November 20). On December 7, the war broke out. Soon after that, my older brother was drafted. So everything was happening all of a sudden. And I knew I couldn’t say to my mother, “I’m going into the convent.” So I continued working.

Of course, every time I’d see the priest, he’d say, “When are you going to make up your mind?”

I’d say, “All of this is happening” and he’d say, “It’s going to happen all the time.” Finally, I knew I had to make up my mind once and for all. I entered the Newburgh Dominicans in December of 1943.

Why did you choose the Dominicans?

I knew them more, I guess; I had the Dominican Sisters in grade school. I had the Sisters of Saint Joseph in high school, and I knew before I graduated that they wanted me to enter their order. They used to wear these large headpieces, these veils. So this one sister used to keep after me, asking, “When are you going to join?” And, finally, I said, “Sister Bernadette, I don’t like your stove-pipe [hat]!” She laughed; she thought it was funny. I was so tired of telling her I didn’t want to go into the Josephites, I had to tell her something else, you know?

It was a great challenge in the beginning. My vocation was a late vocation; I was twenty-six. I was older than the others in the group, and, as a result, their Novice Mistress depended on me for different things. And then some of the other sisters felt that they could come to me and ask questions. I don’t know why! But all of them had come in right from high school, so they had no other experience. 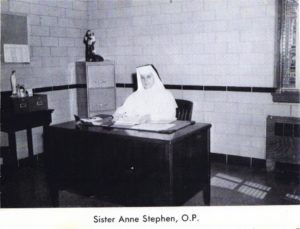 What surprised you in the convent?

I guess the biggest surprise was that I entered in December of 1943, and, in February of 1944, before I was invested, one of our Sisters died in North Carolina. They needed a Spanish teacher in the high school down there. I had experience teaching, but no experience with Spanish. The Mother General asked me if I would be able to handle it; she said that the Holy Ghost inspired her.

When the Mother General called me down to the office to tell me what she wanted, she said, “You’re going down South on Saturday,” and I said, “Mother Mary, you’re crazy.” When I said that to her, she said, “Oh no, I’m not the crazy one.”

Oh, I went. That was an experience.

What was a difficult moment as a sister?

Later, in 1953 when I taught in Laurel Springs, I also took Saturday classes at Villanova. It wasn’t so much a hardship because I liked to study –I liked what I was doing– but it was time, because I had to keep up my grades and teach. And we had large classes! I had the seventh grade, which was comprised of seventy-five students.

Out of all the classes, out of all the students I taught, that group was the best group I ever taught. I had no difficulty with anybody, no discipline, nothing. They weren’t all good students, but they really worked.

Do you keep in touch with any of them?

There are two of them from Laurel Springs that every once in a while I hear from.

What gives you hope?

All along, no matter what would happen, I always had a feeling of calmness in me because I knew that, well, this is what God wants. From April 1993 to July 1996, I was home in Clark, New Jersey taking care of my youngest brother. He would say to me, “You belong in a convent, not here. I’m going to go into a nursing home.” But I didn’t want him to go into the nursing home.

That part was hard because I took care of everything –the house and everything—but it wasn’t the hardness of the work. The hardness was that I was not in the convent and that was the time when all of this change was happening before we became Dominican Sisters of Hope. It was hard because I felt like I was missing that. But I’m glad I had the opportunity to be of help to him.

That sounds like it entailed suffering, in some form. Do you think suffering has a purpose?

Suffering really is not a punishment. And if we didn’t have suffering, no matter how little or how big, if there was no suffering in the world, I often wonder what would happen. People wouldn’t have anything to really bother them, if you know what I mean. It’s hard, sure. Even with me, even now, I have trouble with my legs and all that, but this is part of life and part of what I have to go through. As I was growing up with all the years of school, I always had very good health, so now I have to do a little bit of penitence. Things I used to do in five minutes now take me an hour. That is a hardship because I was always very active. I worked until I was ninety-two years old! But suffering is something that we need in order to be able to really and truly acknowledge our trust and love in God’s mercy. And I think that keeps us feeling closer to God.

This post is in honor of National Nursing Home Week. During this week, we celebrate and honor our retired sisters who continue to do ministry and share their inspiring stories with the world from their homes.