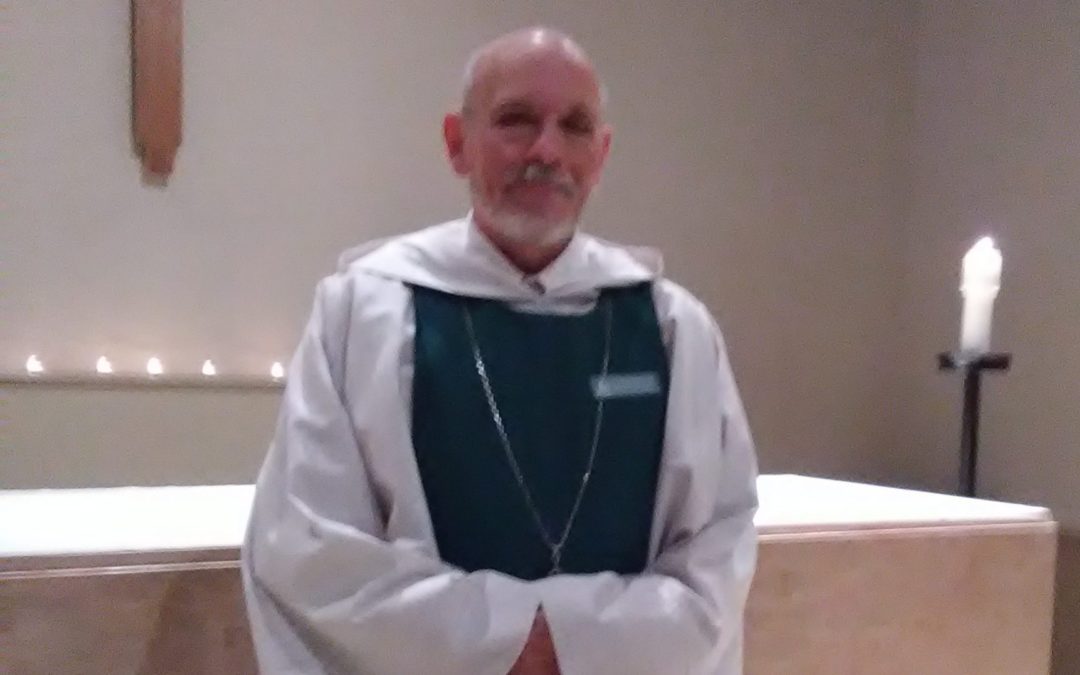 On Saturday, November 23rd, Bill Aull, an associate of the Dominican Sisters of Hope, was clothed into the Novice Habit of Anamchara Fellowship. The ceremony was held at Grace Episcopal in downtown Allentown, PA.

Founded in Delaware and in the tradition of the Episcopal Church, the Anamchara Fellowship is a dispersed group of brothers and sisters who take vows of simplicity, fidelity, and obedience. Bill, now Brother Matthew Luke, began his journey of seeking two years ago.

“God just tapped me on the head and said, ‘I’m not done with you yet. Pay attention. This is your journey. Fasten your seatbelt. I’m with you all the way,’” Brother Matthew Luke recalls.

He describes this period in his spiritual life as “absolutely beautiful.” Over the course of two years, Brother Matthew Luke gathered with Brother John Aelred, AF to discuss the charism, vows, and the movements of Brother Matthew Luke’s heart and spirituality. In October 2019, he began his novitiate.

As Anamchara’s name suggests, the group has a Celtic spirituality. They pray the Northumbrian communal prayer book as well as reflective prayer everyday. Additionally, there are four canonical hours from the psalter of the Saint Helena Breviary (brothers and sisters can also use the traditional breviary). Brother Matthew Luke now wears the habit and has a religious name: Matthew in honor of Matthew Shephard, a modern-day martyr who was beaten to death for his sexuality, and Luke who Brother held as a patron saint during his years as a nursing assistant.

Through his journey to his clothing, Brother Matthew Luke says that he has carried the Dominican Sisters of Hope with him.

“Being in relationship with the community as long as I’ve been –since I met Sister Mary Headley and Sister Cecilia Crittenden at Rainbow Home– I never felt like I was alone,” Brother Matthew Luke says. “Knowing that I have the support of the Hope community has made the transition from seeker to aspirant to novice so much easier.”

Brother Matthew Luke is also faithful about checking the listerve.

“When I see a prayer request come through, I make a note of it,” he says. “I make sure that the Anamchara Fellowship is praying for the intentions of the Dominican Sisters of Hope, too. I’m still an Associate of Hope. I wanted to make sure of that with this transition.”

Now, Brother Matthew Luke’s habit has one special feature: the rosary from the last sister to serve at Rainbow Home.

“After seven years there, I had taken care of 267 patients,” Brother Matthew Luke remembers. “It was time for me to leave, but I was gifted this rosary. As I wear it, I carry a piece of Rainbow Home and the sisters with me.”