Finding Her Calling through Art 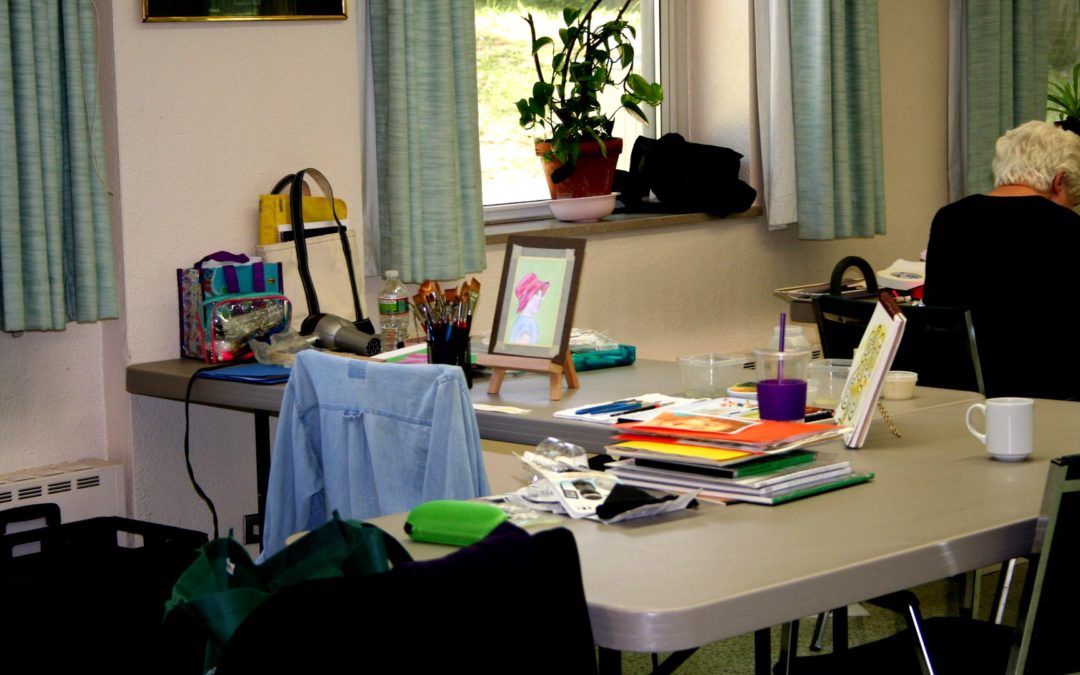 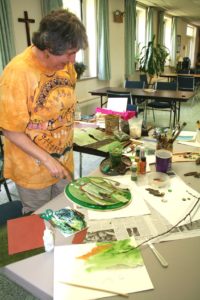 Ulana at her station at the 2014 Artists’ Retreat

At her work station for the week-long Artists’ retreat, Ulana Salewycz pores over pebbles, eggshells, photographs, and paints: all materials she uses to create new works of art. She says she comes to the retreat with a mental plan of projects to begin here, and then she lets her craft take on a life of its own.

Her path as an artist started very much in this same spirit: serendipitous and of its own volition. Ulana is soft-spoken with a sincere presence about her, but her demeanor hints at an openness to possibility. Perhaps it’s because, when Ulana first came to Mariandale for a Recreation Retreat in 1999, she had no idea her life was about to change.

At the time, Ulana was working in interior design, and she had signed up for the retreat for spiritual reasons. She did not know that the leader of the retreat, Dominican Sister of Hope Lorraine Ferguson, OP, was an art therapist, and that she, eventually, would become Ulana’s personal mentor.

Prior to attending the Recreation Retreat, Ulana had considered a career in art therapy; it piqued her interest in college, but she lacked the support and guidance she needed to enter the field. When she met Sister Lorraine, she felt a click. Sister Lorraine believed in Ulana, and granted her the encouragement she had been seeking. With Sister Lorraine’s guidance, Ulana applied to the College of New Rochelle for a Master’s degree in art therapy, got in, and made a career switch.

“Sister Lorraine helped me to speak my own truth and have my voice heard,” Ulana says. “She was like my cheerleader.”

Ulana now works as an art therapist and makes art out of her own studio. And she still attends retreats at Mariandale, though nowadays she’s a regular at the Artists’ Retreat. Ulana has attended four Artist Retreats so far, and she has found each one to be fruitful.

“There’s no place like Mariandale because it’s a spiritual place and there’s camaraderie here,” she says. “There’s energy. There’s nature. You’re able to be quiet; you’re free to think of whatever. It spurs creativity.” 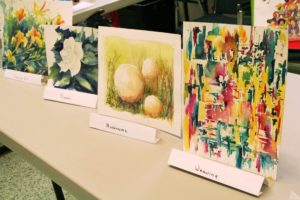 Camaraderie with fellow artists (eight people attended the June 2014 Artists’ Retreat) helps Ulana to be productive within her preferred media: she works with oils, watercolors, collage, mixed media, and photography. The presence of the sisters at Mariandale also inspires Ulana artistically and spiritually.

“I feel very connected to the nuns,” she says. “When I’m feeling stressed or feeling any kind of guilt, whether it be interpersonal, or daily, or relational, they tell me it’s okay. They bring it to a human level.”

This connection, combined with her love of art, makes for a rich experience each time.

“There’s joy on these retreats,” Ulana says. “It’s total freedom to be who you want to be. I just wish it was longer.”

Mariandale Retreat and Conference Center‘s Artists’ Contemplative Retreat provides professional and amateur artists of any medium -poets, painters, sculptors, playwrights, etc.- the opportunity of time, space, and contemplative atmosphere to do their own work, allowing the creative spirit to emerge. The sprawling grounds overlooking the Hudson inspire and nurture creativity. Participants spend the week pursuing their art and coming together for meals, shared prayer, and creative support. Participants do need to have an identified medium, bring all their own materials, and be able to work independently. All skill levels are warmly welcomed.