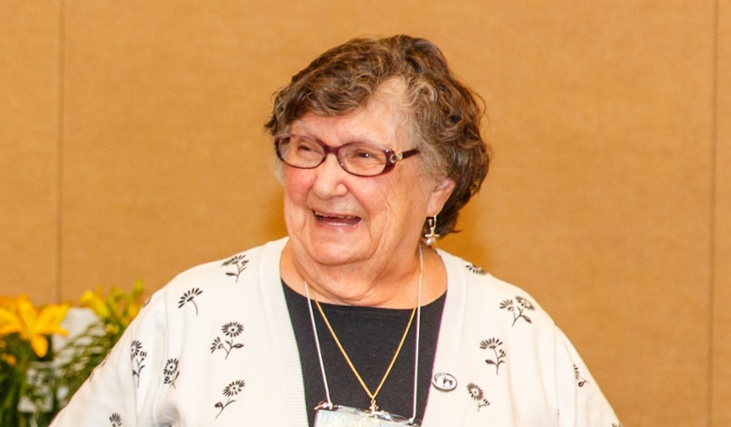 On September 25th, Sister Joan Ruth Whittle passed away. Below, we remember her for her years of teaching and for her most recent ministry volunteering as a school librarian.

In 2011, after fifty-three years of teaching, Dominican Sister of Hope Joan Whittle, OP retired from Rice High School in New York City. After she announced her retirement, Brother Steve at Mount Saint Michael Academy in the Bronx contacted her asking what she planned to do after the school closed.

“That’s not on my bucket list,” Sister Joan replied.

The fall after her retirement, Sister Joan checked an item off of her bucket list: she took a cruise to Alaska and gaped at the glaciers. For the past five years, Sister Joan could be found in the library at Mount Saint Michael Academy. Although she was technically a volunteer, she served as the librarian of the all-boys school from Monday through Friday, 7 am to 4 pm. On mornings when she arrived a few minutes late, she was greeted by students anxiously waiting for her.

“I’m like their grandma,” Sister Joan said. “I like to listen to their stories. They tell me about difficulties with their girlfriends, or they ask for tutoring. I helped one student with tutoring and the word got out that I was okay.”

For Sister Joan, making the library a welcoming, productive place was a priority. She kept the volume at a whisper, recommended books to the students based on their individual interests, counseled them through their problems, and helped them with their homework.

However, when asked what makes a librarian great, she was quick to note that she was a teacher for fifty-three years before she embarked on her current role.

We got in touch with several of Sister Joan’s former students from Saint Ursula School and Our Lady of Victory School, both in Mount Vernon. We asked them what made her a great teacher for fifty-three years. Here are some of their answers:

1. She Pushed Us to Do Our Best

According to Greg Barbara, who had Sister Joan at Our Lady of Victory, Sister Joan was one of the main reasons that he was able to excel at math. “She always pushed us to do our best,” Greg shares. For Greg, the push in math translated to a lifelong passion: “It also guided me to pick my profession as a CPA,” he shares.

“It was very important to me that my brother attend Our Lady of Victory (OLV); so much so that I paid what I could to have him go there. I can remember Sister Joan standing out in front (the doors to OLV) talking with me briefly about how we could make that happen, and my brother did attend! So thankful to her and agree with statements above; as math teacher, the best!” -Tina Little

3. She Wasn’t Afraid to Be Quirky

Most teachers probably don’t bring dogs into convents or schools. Sister Joan did, though, and more than once. Bob Lang didn’t have Sister Joan as a teacher, but he vividly remembers her poodle, Friar, from 1971.

Christine Baena Keniston also remembered a pup, though it’s not clear if it’s the same one:

“I had Sister Joan for eighth grade, and I did adopt a puppy from her- he was being kept upstairs in the convent and she was having a hard time finding a home for him,” she says.

This one was too good to paraphrase. Direct quote below:

“Wonderful Sister Joan. I had her for grades 6-8, and as my 8th-grade homeroom teacher. She made a big impact in my life. I remember she would let us bring our records in and we’d play them and discuss their meanings. She’d also bring in things like the Beatles, Manfred Mann, and Dylan, and we’d talk about the implications of some them regarding religion and/or God.

In 1977, a couple of friends and I wanted to go to Madison Square Garden for our very first rock concert, Black Sabbath. Our parents wouldn’t let us go without adult supervision. Who should come to the rescue but Sister Joan herself! We got her a ticket; she drove us down and took in the show with us. True story. She was something else. She was ahead of her time and I really respected her.” -Carlos Ferreira

5. She Left Room for Fun

While her former students are quick to note that Sister Joan was “good but tough,” many elicit memories of her having fun outside of the classroom, too. Whether it was rollerskating with Sister Joan in the gym on Friday nights or going out for pizza after ice skating, many of Sister Joan’s former students treasured her presence outside of academia. It’s safe to say she pushed her students to work hard, but she also encouraged them to play hard afterward.

Sister Joan left room for fun until the end. She celebrated her sixtieth year as a Dominican Sister this year, and, when she wasn’t in the library or serving on various committees with the sisters, she could be found enjoying a good book or taking personal interest classes in Lower Manhattan.

“I hope that God will bless me and keep me strong,” Sister Joan said a few months before she passed away. “I want to be of service to others.”