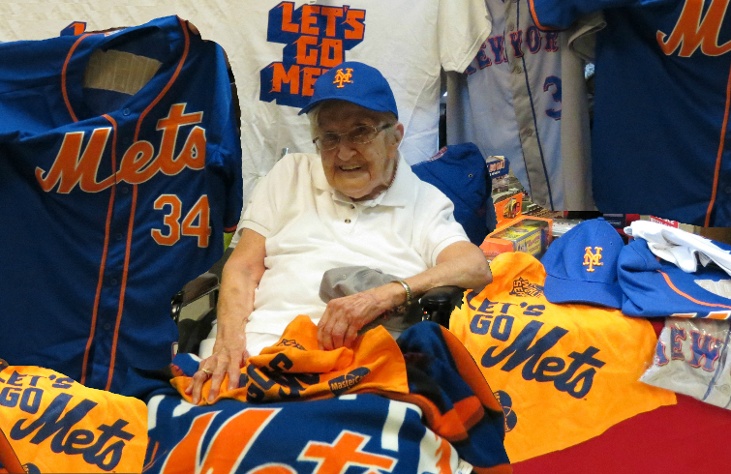 Dominican Sister of Hope Anne Stephen Hajducek, OP has been a Mets fan since around 1970 when her brother began following the team. She often watched games when she went home for visits from the convent; she’s even visited Shea stadium three times!

“Little by little, I became enamored with the team,” Sister Anne Stephen recalls. “I don’t enjoy football or basketball or any other sport, but I love the Mets.”

Now retired, Sister doesn’t miss a game, and she can recite the team’s stats by heart. Sister turned 100 this past January, and a Mets-themed party seemed fitting. As her community prepared to celebrate, they realized something shocking: the die-hard Mets fan didn’t have a single piece of Mets paraphernalia.

Sister Catherine Walsh, OP, who serves on the Leadership Team of the Dominican Sisters of Hope, couldn’t believe it.

“Sister Anne Stephen follows every game,” Sister Catherine Walsh says. “If the games are late at night, she watches them the next day on ESPN. She can tell you every player’s stats, strengths and weaknesses. She follows players when traded and evaluates their performance. But she doesn’t even have a Mets hat!”

Together, the sisters and their staff petitioned the Mets to help Sister Anne Stephen celebrate her birthday. The response was far greater than they expected: in addition to hats, T-shirts, and a slew of Mets items, Mets player José Reyes sent Sister Anne Stephen a personalized video wishing her a Happy 100th Birthday.

As the room filled with joy and surprise, it was clear that Sister Anne Stephen’s birthday was a hit.

“I sincerely thank all of you, especially the Mets,” she said. “I can’t forget the Mets and all the Mets fans, thank you a thousand times.”

Sister Anne Stephen thanks everyone:

At the end of her bash, Sister still had one hope: “that one day they’ll win the World Series again!”