Quilting the Past and Future Together 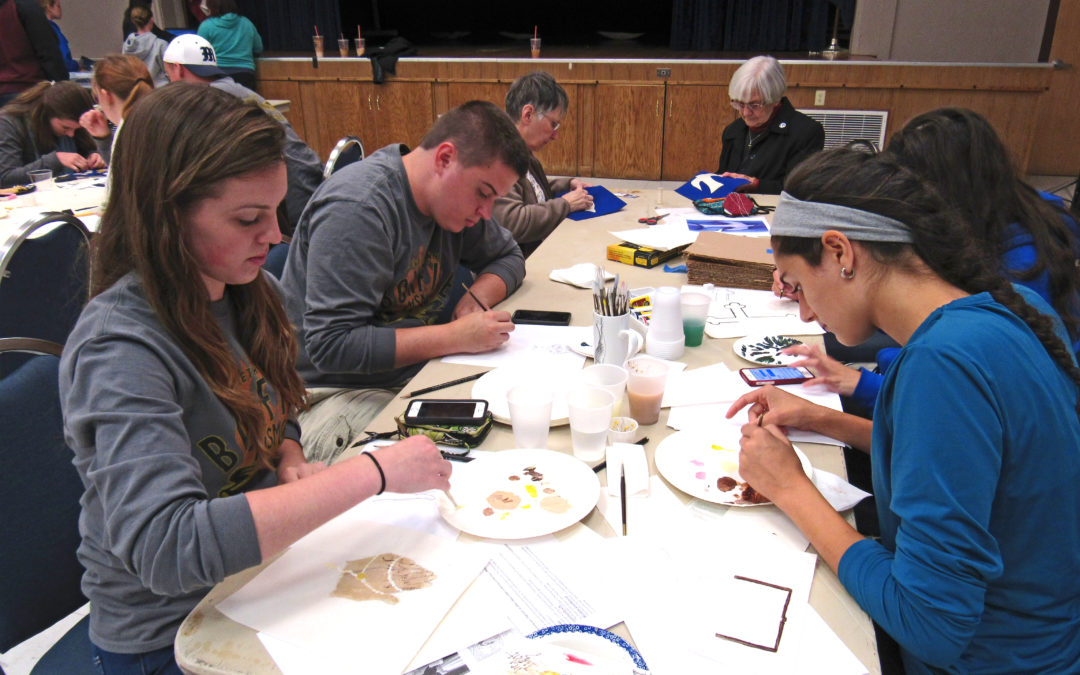 On a bright Saturday afternoon at Mount Saint Mary College in Newburgh, New York, a group of students threaded needles and meticulously cut out patterns. Their mission was unlikely enough: they were quilting. This past Saturday, students gathered alongside sisters, staff, and faculty to create a Jubilee quilt.

The idea came about when the college’s Catholic and Dominican Institute began asking how the campus might celebrate the 800th Jubilee of the Dominican order. Together, they decided on a community arts project that would display the Dominican heritage while including aspects of the college. After toying with the idea of a tapestry, which was a typical art form during the time of Saint Dominic, they agreed on a quilt laden with symbolism. 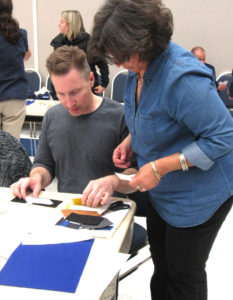 Laura Nicholls and Charles Zola look at plans for the quilt

Laura Nicholls, who was granted an honorarium to be a liaison to bring the Saint John’s Bible into classes on campus, now serves as the Artistic Director for the quilting project. She’s helped to design the quilt, a project that, she says, she hopes will be successful for all involved.

“I created the patterns to let everybody take part in the quilt,” Ms. Nicholls explains. She has devised the project so that, after students help to build “the skeleton,” sisters can embroider the quilt and add beauty and details to it.

As Ms. Nicholls sees it, the collaborative effort exemplifies Mount Saint Mary. “There’s the connection between the sisters and the Dominican school, the sense of service and building,” she says. “I included the charism, Dominican symbols, and symbols of the college.”

Certainly, the quilt is not lacking in symbolism. It’s covered with images, many of which are packed with significance. 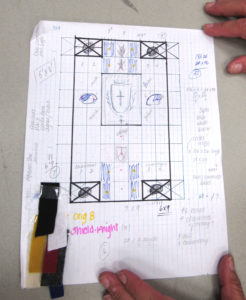 Ms. Nicholls shares her plan for the quilt

“It’s multi-layered,” explains Dr. Charles Zola, Assistant Professor of Philosophy and Director of the Catholic and Dominican Institute. “For each century of the Order, we’re including a Dominican saint from the Founder’s Chapel on campus. There are icons from campus, such as the Knight’s Shield and images from the Saint John’s Bible, which we’re hosting this year. We’ve also included the image of a dog with the torch, which symbolizes Saint Dominic himself as well as the famous words of Saint Catherine of Siena, ‘Go set the world on fire.’”

The list of pertinent images —all sketched, cut out, sewn, and embroidered by sisters and students collaboratively— is more than just eye-catching. It’s the very story of Dominicans, and their relationship to Mount Saint Mary College. The story spans centuries.

“Our mission of education began here in Newburgh when four Sisters of Saint Dominic traveled from New York City in 1883 to establish Mount Saint Mary Academy,” recalls Sister Lorelle Elcock, Prioress of the Dominican Sisters of Hope. “Mount Saint Mary College was later founded by the Sisters as a natural extension of its mission.” 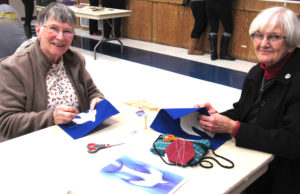 Whereas the sisters were once predominant in this mission (they have served as everything from presidents to deans to librarians of the college), today they are less physically present on campus. Quilting, then, is a way for them to connect with students and to preserve this heritage.

According to Dominican Sister of Hope Donna Brunell, OP, the quilt will serve as a piece of history. Quilts tell stories, just as ancient cathedrals used to tell stories before the public had access to books.

“The original cathedrals were designed to tell the story of scripture when people didn’t read,” Sister Donna says. “The images in the cathedrals became a storyboard for the Gospel message.”

“You hope it’s going to attract attention,” Sister Donna adds, all the while stitching carefully. “You hope people will ask ‘What’s the story behind this quilt?’” 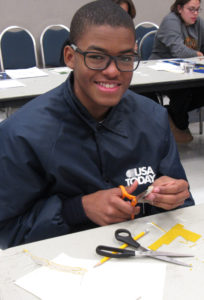 That afternoon, the question was being asked all around her. Students from all ends of campus came to participate; Henry Rowson, a freshman, joined the project because he wanted “to learn more about culture of Mount Saint Mary.”

“I wanted to help out,” Rowson says. “I thought it would just be nice to see how everyone’s work comes together as a finished product.”

The presidents of each class at the college as well as the Student Government Association President were also present, each wearing a t-shirt announcing the bonfire that was to happen later that afternoon.

“Every year, the School Senate does a bonfire to close Spirit Week at the Mount,” Bradley Moody, the Student Government Association President explains. “It’s the biggest day of the year because it’s the time when the school comes together to celebrate who we are as a whole.”

The student leaders decided to host the quilting event as a brief lesson in history and creativity before the school-wide bash.

For them, it’s a way of leaving their mark at the school while honoring an age-old Dominican tradition.

“Tradition is important,” notes Steven Tobey, Sophomore Class President. “We’re leaving an imprint on generations to come that should always be appreciated and valued.” 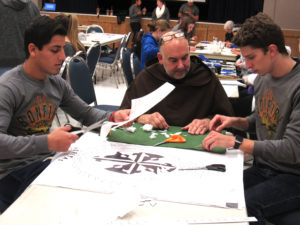 The group of young men that comprise the college’s senate are clean-cut and wide-eyed, all with polished smiles. They don’t look like a group who would be interested in quilting (“I didn’t think we’d ever be quilting on a Saturday morning!” Tobey comments). While they admit this willingly, they are quick to add that it was a good experience to try “something new.”

When one begins talking about Dominican values, the group is quick to recite the four pillars: study, service, prayer, community. According to the group, although the sisters might no longer be as active on campus as they once were, the Dominican charism is still “incorporated in student life,” “incorporated into parts of” them as students at the institution.

“It’s present in subtle ways,” Moody says. “We do the four pillars everyday here. That’s the community that we are a part of. The Dominican values are such a part of our culture, part of our life.”

As he listens to the discourse among his peers, Junior Class President John Cahiaia draws a parallel between the quilting in the afternoon and the bonfire later in the day.

“Just like the bonfire, we’re building something from the ground up with this quilt,” he volunteers. Like the others, he acknowledges that quilting isn’t a hobby of his, but he enjoyed branching out and even representing the students who weren’t present to quilt with the sisters.

And then, he makes a comment that illustrates the Dominican heritage and the very spirit of the four Sisters of Saint Dominic who traveled from New York City to establish Mount Saint Mary Academy in the late 1800s. It depicts their mission far more than a black-and-white shield or a dog with a torch.

“I think it’s important to not be scared to be the first to do something,” John says, with felt scraps and loose threads under his fingers. “It’s important to be a part of new things.”