Hope Lives in Memory, and in the Future 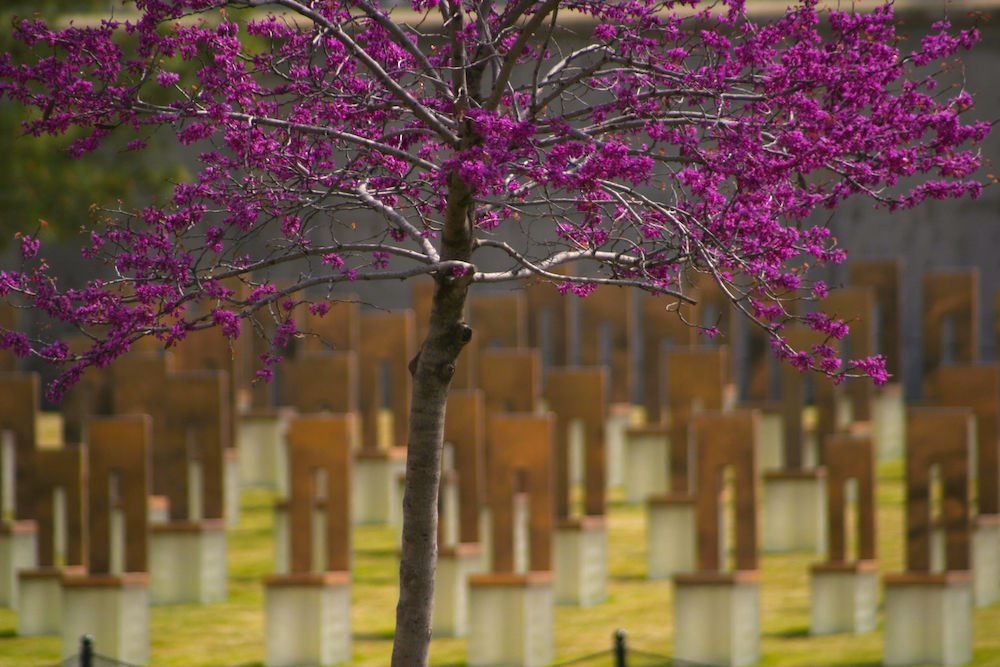 Sister Lin, a former Akron Dominican, now Dominican Sister of Peace, volunteered to work with the Las Casas on-site team from October 3 to December 5, 1999. Sister shared with me that I would never forget the year of our founding as Dominican Sisters of Hope because it was the same year as the Oklahoma City Bombing, 1995.

Another occurrence fixed in my memory is the year 2008 when Sister Catherine McDonnell finally arrived at Will Rogers Airport in Oklahoma City after numerous delays because of weather either in New Jersey or Oklahoma. When Sister arrived, we (Sister Jo Ann Fleischaker, OP and I) convinced Cass that if she wanted to go to the Oklahoma City Bombing Memorial, this would be her only chance since our home was two hours from Oklahoma City, and we would not be returning to the City until it was time for her return trip. So, about 1 a.m. the three of us, and a guard who is always stationed at the Memorial, walked in the quietness of the early morning hour! We heard just the sound of the water in the reflecting pool. I had been to the Memorial with other visitors, but never at that time of the night! I will never forget the 19 little chairs which were lighted as little beacons in the second row on the side of the Memorial in memory of the precious children who died in the daycare center.

We have one little chair on our front porch as well as a bench that accommodates about three children. The chair has been repaired several times from usage. One of the women at church painted it red to match the front door. The bench, a gift from Sister Margaret Charles, is showing its age! The children who come for Sister Bags each day enjoy visiting on the porch.

There is a small café in one of the buildings near the Memorial. On one of my previous visits to the Memorial and to the café, I remember meeting the mother of the baby who died in the arms of the fireman who carried her. Baylee Almon died at Saint Anthony’s Hospital in Oklahoma City. It is always the children! They touch our hearts in so many ways! They also give us the stamina to go on and on…

Somehow, I do not remember visiting the tree at the Memorial during our early morning hour visit. On other occasions, I have been in pictures with visitors at the tree. Perhaps, it was the hour of the early morning that has erased the seeing of the tree at that time. Maybe, it was just meant for me to concentrate on the little chairs!

Whatever happened that night, the memory of the children and the adults have given me hope to carry on! Father John Vranna gave me a copy of Charles Peguy, Hope (L’Esperance): “My little hope is she who goes to sleep every night, in that child’s crib of hers, after having said her prayers properly, and who every morning wakes up and rises and says her prayers with a new look in her eyes.” I am so keenly aware of how many times during the day someone uses the word: Hope! We have a print of the words,” Never deprive someone of hope, it may be all they have!” Notice that there’s a big difference between “hoping that” and “hoping in.” The slogan for upcoming Oklahoma City Marathon is: “Looking Back, Thinking Forward.”

In the hall at our parish, there are these words on the wall: Tempus Fugit, Memento Mori. I think that those words capture the meaning of what Sister Lin Howley tried to convey to me about never forgetting the year of our founding as Hope, and what happened in 1995 in Oklahoma City on April 19, at 9:02 a.m.

Several weeks ago, I was watching a football game between Baylor University and the University of Oklahoma. The camera was focused on a sign: “Win or lose, at least we don’t have to live in Oklahoma.” I talked to the TV, and said: “How sad!” I am truly grateful that as a Dominican Sister of Hope, I have been given the opportunity to live and minister among the good people of the State of Oklahoma, especially our Cheyenne and Arapaho sisters and brothers in northwestern, Oklahoma! Praise be to God!

At 3 pm on July 20, 1995 the Dominican Sisters of Hope were founded. On July 20, 2019, we began our 25th year since our founding. We declare a YEAR OF HOPE! In celebration, we will share a reflection on the 20th of every month. This is the fifth reflection in this series. Read all reflections here.

Sister Mary Ann arrived in Oklahoma on September 6, 1990 to do advocacy work with the Cheyenne and Arapaho populations. Her first ministry was to help to distribute clothing and food while living among the people in a town with a population of about 650. Though the town was small, the need was great. Each month, the Oklahoma Regional Food Bank of which the sisters were members distributed around 6,000 pounds of food. Sister still lives in Oklahoma, and is a certified death and grief counselor, tai chi chih instructor, reflexologist, and infant masseuse. In her spare time, she serves as a tutor, mentor, and source of hope within her home community.