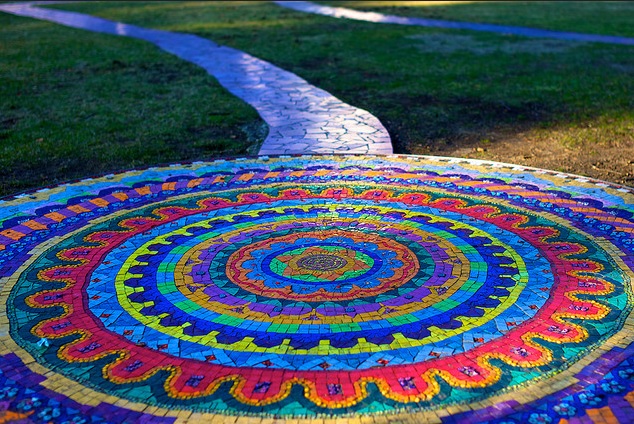 Ask artists what they love about the Artists’ Retreat at Mariandale Retreat and Conference Center in Ossining, NY and you’ll get a common refrain: it’s an open, accepting environment.

“It’s total freedom to be who you want to be,” said Ulana Salewycz, an art therapist who works with oils, watercolors, collage, mixed media, and photography.

Rose Amodeo Petronella, who facilitates and attends the retreat agreed: “There’s a spirit of acceptance on the retreats,” she said. “Mariandale welcomes you wherever you are in the artistic process.”

The infamous warm welcome had a face. Sandy Hernandez, an a participant in the Artists’ Retreats, set the standard of a warm, friendly atmosphere from day one.

A retired social worker and artist focused on photography, drawing, and painting, Sandy attended the first Artists’ Retreat in 2004 (unbeknownst to her, it was intended only for religious sisters).

After being the first to arrive, greet everyone, and help them settle in, Sandy set up a work-space that was teeming with supplies. Throughout the eight-day retreats, she made additional runs to craft stores, and offered to bring others with her. At the nightly meetings, she shared her artwork and encouraged others in their artist processes.

“In the free-wheeling nonsense among us, [Sandy was able] to deliver something profound.”

“I will always remember Sandy as a person who truly embodied the Christian ideal of greeting everyone as if meeting Jesus,” Ms. Amed said. “She made friends easily and embraced all with her loving, beautiful spirit.”

Sister Elizabeth Michael Boyle, OP, who also attends the Artists’ Retreats remembered Sandy as someone who was able to help others on the retreats find deep meaning. “What I remember most about Sandy was her rock-solid honesty as an expression of Godliness,” Sister Elizabeth said. “She had complete faith. In the free-wheeling nonsense among us, [she was able] to deliver something profound.” 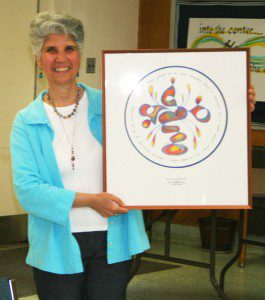 Ms. Petronella presents her mandala to Mariandale in Sandy’s memory.

Sandy continued to create art and inspire her peers on every Artists’ Retreat from 2004-2013. However, the June 2013 retreat was to be her last; she passed away in July 2013 of health complications. At the conclusion of the June 2014 Artists’ Retreat nearly a year after her death, the community remembered her fondly as “the heart” of the Artists’ Retreat and a much-missed friend.

Just as Sandy helped others to focus and find meaning and truth, Ms. Petronella said that the first step in creating the mandala was centering herself.

Ms. Petronella took an extra step to commemorate Sandy’s life and spirit: she presented Mariandale with a framed mandala that will be featured on all retreats.

An integrated structure with a series of designs organized around a unifying center, the mandala usually symbolizes wholeness, connectedness, and centeredness.

Just as Sandy helped others to focus and find meaning and truth, Ms. Petronella said that the first step in creating the mandala was centering herself.

“I was deeply grateful for the creativity, friendship, warmth, acceptance, encouragement of the retreat,” Ms. Petronella said. “Sandy was a big part of that because she was so accepting of everybody.”

Although Sandy Hernandez will no longer be physically present at the retreats, the mandala and the love here for her ring of her immortal presence.