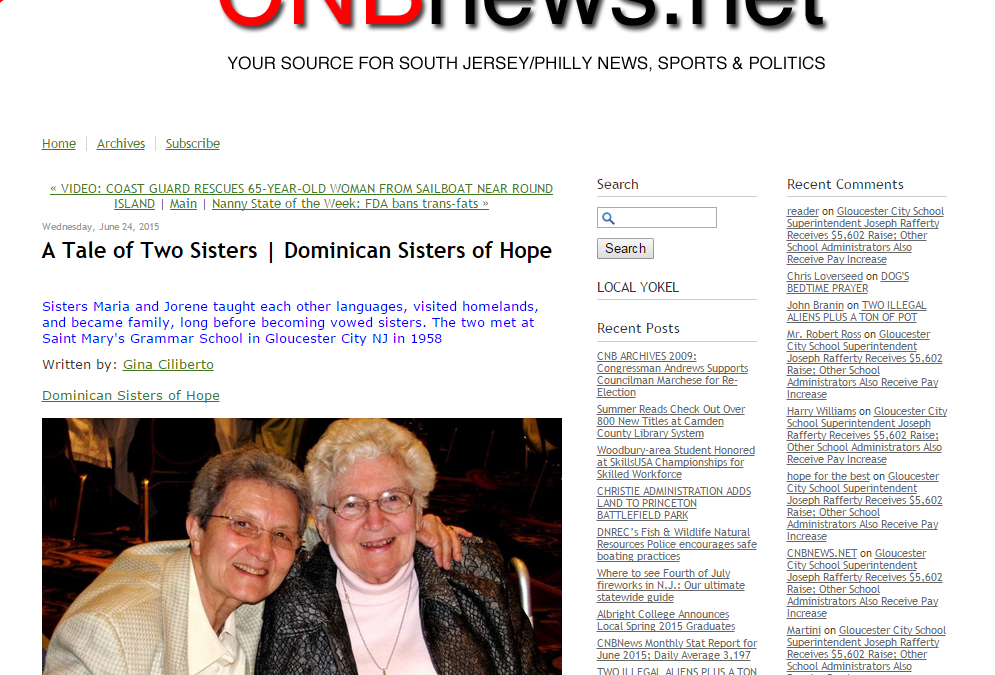 Dominican Sisters of Hope Maria Barbera and Jorene Cieciuch. taught each other languages, visited homelands, and became family long before becoming vowed sisters. The two met at Saint Mary’s Grammar School in Gloucester City NJ in 1958. CNBNews.net, a Philly/South Jersey news site, published the story of their friendship on June 24. Read their story below.

Dominican Sisters of Hope Maria Barbera, OP, and Jorene Cieciuch, OP, encounter each other as any two sisters would: hands entwined, kisses on the cheek, both beaming. When they meet, it’s obvious that they’ve been friends since before the Dominican Sisters of Hope was founded, since before Maria was a Dominican Sister at all, for fifty-six years, exactly. It’s not obvious, though, that Sisters Maria and Jorene have taught each other languages, revisited homelands, and become family when biological family was lost, long before becoming vowed sisters.

The year was 1958. Sister Jorene, then called Sister Helen Roberta, was a music teacher at St. Mary’s School in Gloucester, New Jersey. Maria was another noisy seventh-grader in the back of music class.

“I was teaching them to sing the Requiem Mass, and Maria was talking to the young man next to her, which was not good,” Sister Jorene recalled.

Sister Jorene asked Maria to report to her office after school, but what was meant to be a disciplinary meeting turned into the beginning of a friendship. The two immediately hit it off.

“I always admired her,” Sister Maria recounted of Sister Jorene. “She was very spiritual, prayerful.”

Sister Maria ushers me closer to show me a photo on her phone of the pair: the photo was taken on August 30, 1964, the day Sister Maria became a postulant with the Dominican Sisters. Sister Maria stands in a novice habit, young and bright-eyed; Sister Jorene proudly stands next to her, tall, youthful, elegant. Sister Maria points to Sister Jorene, then in full habit, and quietly, with a smile, asks, “Wasn’t she beautiful?”

Read the rest of the story here.