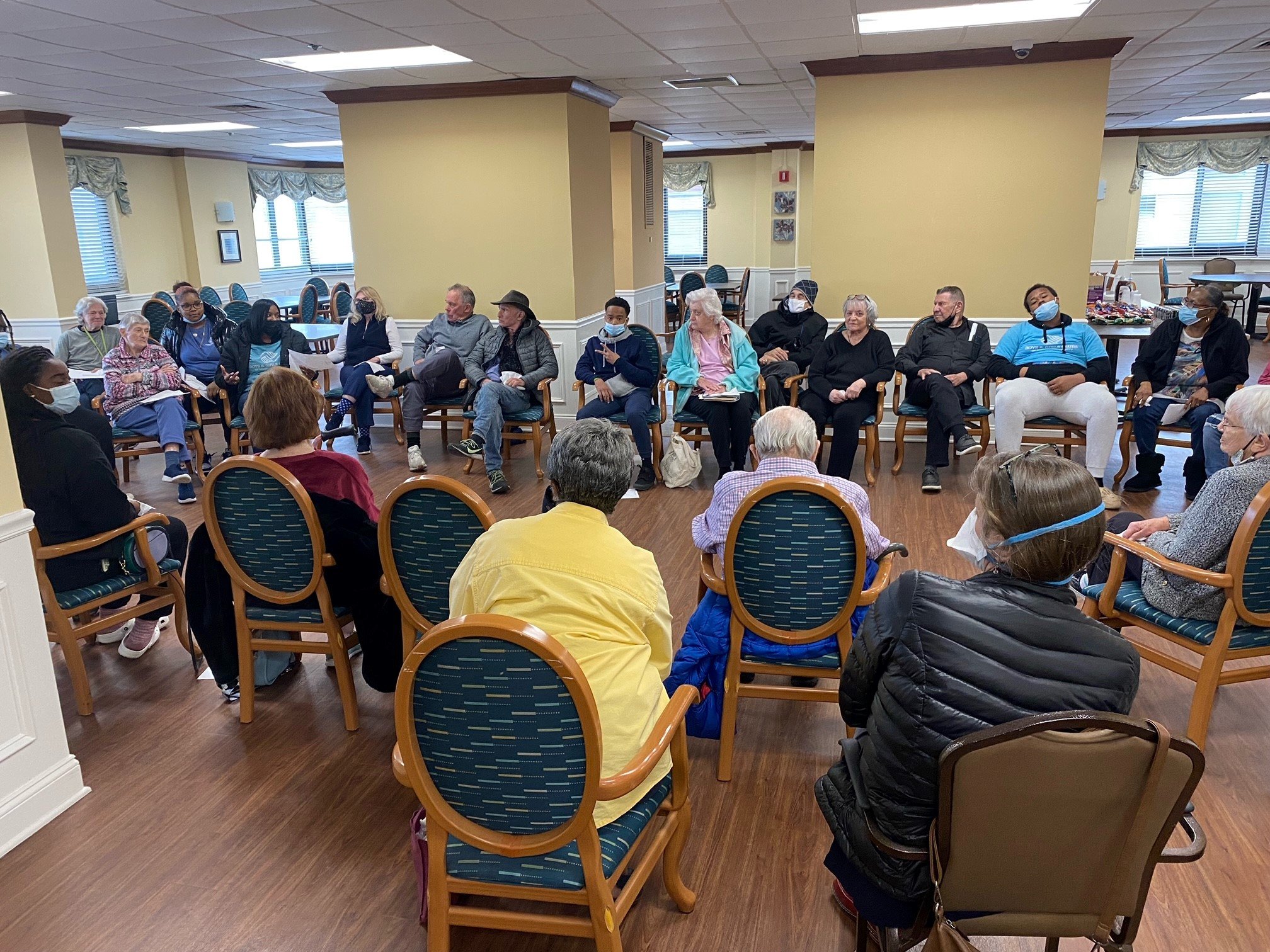 Residents of Asbury Park Towers meet with teens from the local Boys and Girls Club.

In 2020, the murder of George Floyd and other African Americans including Ahmaud Arberry and Breonna Taylor sparked outrage, ignited Black Lives Matter protests around the country and world, and motivated the Hope family to educate ourselves about systemic racism and find ways to address it as a congregation.

At her home in Asbury Towers, Sr. Pat Jelly reached out to fellow resident and friend Beverly Lyons, and the two decided to start a monthly anti-racism discussion group to “uncover more and more of our unconscious bias and keep our minds and hearts open to what more we can do,” in the words of Sr. Pat. Throughout the pandemic the group met monthly (masked and socially distanced) to read and discuss articles on systemic racism, white privilege, and the history and legacy of slavery. Fellow Asbury residents Sr. Marianne Watts, Sr. Mary Anthony, and Sr. Pat Flynn attended as well.

By 2021 the group was ready to step into action, and a subset led by Sr. Pat and Beverly met with the Asbury Police Commissioner to talk about the issues of racial profiling, and then with the Superintendent of the local school district to push for anti-racism educational initiatives. Their conversations led to more meetings last fall, this time at the Boys and Girls Club of Monmouth County. They discussed the Boys and Girls Club members’ experiences with police and with the school system. “We had heard from education officials that youth of color were stopped more frequently by police.  The youth at the Boys and Girls Club are mostly African American and Hispanic,” said Sr. Pat. “We felt it would be very good for seniors to hear from the youth what their experiences were.”

Last month several teens from the Asbury Park Boys and Girls Club accompanied by their Site Coordinator Destiny Smith came over to Asbury Towers for discussion with a large group of seniors. The Boys and Girls Club members had already had several internal conversation about race relations. “Conversations had been coming up on an informal basis since George Floyd,” said Destiny, adding the teenagers “had opinions on that situation and needed a safe space to talk,” to know that “it’s okay to feel how you’re feeling.” Some of the teens are starting to drive, said Destiny, who facilitated additional discussions on what to do and not do, should they get stopped by the police.

Talking with an external group such as the residents of Asbury Towers gave them an opportunity to use their voice and larger platform to vocalize what is going on in their lives, said Destiny, who facilitated the meeting. The agenda included time for the Asbury residents to respond and share their own thoughts on the issues raised. “It’s important that seniors are involved,” added Destiny, as they have “a wealth of knowledge” as well as connections to further opportunities.

At the end of the meeting Destiny asked each participant to share one thing that they would commit to doing to address racism as a result of this meeting. Many of the youth committed to continuing to use their voice and speak up, and many of the seniors committed to staying in conversation and finding other ways to assist. One senior with local connections offered to inquire about summer employment opportunities for the teens.

The seniors and teens plan to continue meeting together and invite the local police chief, school district superintendent, and education commissioner to future meetings. “Maybe we’ll get a step closer to understanding across generational lines as well as racial lines,” said Sr. Pat.