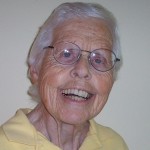 Sister Barbara Wheeler, OP of the Dominican Sisters of Hope, died January 4, 2014. She was 89 years old.

The daughter of the late Clarence McCarthy and Marie B. Duckart, she was born September 2, 1924 in Minneapolis, Minnesota.

S. Barbara’s Mass of the Resurrection can be connected to on You Tube at this link.

Sister Barbara entered the novitiate of the Dominican Sisters of the Sick Poor on September 24, 1946, made her First Profession April 15, 1948, and Final Profession April 13, 1951. Sister Barbara earned her RN in Nursing from Misericordia, her BS in Nursing from Edgecliff College in Cincinnati, OH, and her MA in Liberal Arts from Manhattanville College.

After graduating from high school, Sister Barbara enlisted in the U.S. Coast Guard and was stationed in Brooklyn and the Washington, DC area. These experiences exposed her to the reality of poverty within our nation and led her to a decision to spend her life in service to the poor. After joining the Dominican Sisters of the Sick Poor and graduating from Misericordia Hospital School of Nursing, Sister Barbara did community nursing in Dayton, OH (1948-49 and 1952-54) and Minneapolis, MN (1955-59). She returned to Cincinnati, Ohio, where she earned her BS from Edgecliff College and also served on the General Council of the Dominican Sisters of the Sick Poor (1960-64). From 1964 to 1968, she served as director of formation and newly professed sisters in Ossining NY. During this time, Sister earned a Masters in Liberal Arts from Manhattanville College. Sister Barbara returned to Cincinnati, where she did community nursing in the West End, a low-income predominantly African-American community. This experience provided an opportunity to become involved in the broad issues confronting the poor. In 1980, Sister Barbara was part of a group that founded the Community Land Coop of Cincinnati, a project to make home ownership available to low-income families. In 1990, she and a Sister of Notre Dame de Namur, co-founded a job-training program, Power Inspires Progress. This program helps people to overcome difficulties and learn new job skills in order to obtain permanent employment. As co-director, Sister Barbara developed the Venice Pizza business for on-site training and continues to serve as the restaurant manager. Sister Barbara received the 1995 Peace and Justice Award from the Intercommunity Center for Justice and Peace in recognition of her long-term commitment to working for peace through acts of justice and mercy. Sister Barbara served on the Board of Trustees of Elderly People in Community (EPIC) and was a member of the Cincinnati Chapter of Ohioans to Stop Executions (OTSE). She was also an active member of Call to Action and St. Joseph Parish in Cincinnati, Ohio.