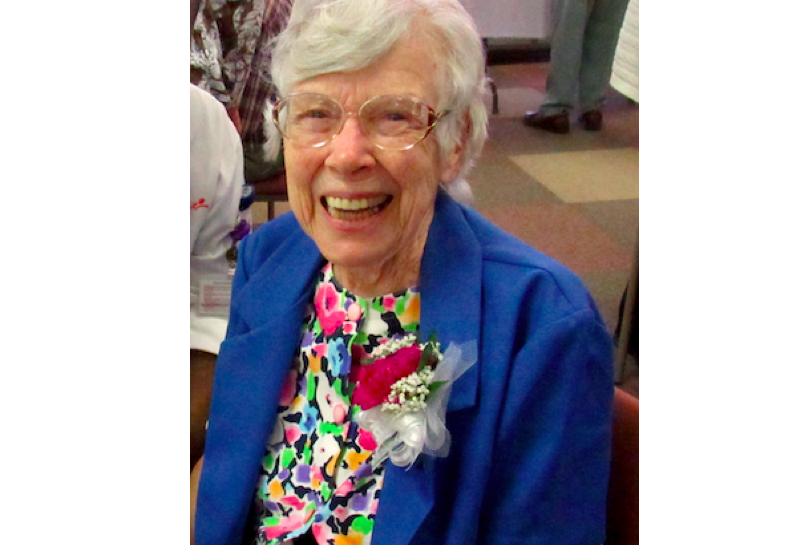 Sister Lorraine Ferguson, OP (formerly Sister Ann Gregory), a Dominican Sister of Hope, died on November 12, 2018 at the Wartburg, in Mount Vernon, New York. She was 92 years of age.

The daughter of the late William Joseph and Ann Kaspern Ferguson, she was born April 13, 1926 in Yonkers, New York.

Sister Lorraine entered the novitiate of the Dominican Sisters of Newburgh, New York on September 7, 1947, made her First Profession June 25, 1949, and Final Profession August 22, 1952. Sister Lorraine earned her BS in Education from Seton Hall University in 1961, her MA in Art at the University of Notre Dame, Indiana 1966, and her MA in Expressive Therapy at Lesley College, Cambridge, Massachusetts in 1985.

Sister Lorraine’s greatest joy was teaching art, creating her own art, facilitating retreats, and ministering to others. Her European travels broadened her appreciation for other cultures which she was able to share with others. She had a deep gratitude for her Dominican Family who supported her over her 70 years. “To love wisdom is to listen to God’s heart beat.”

Sister Lorraine is predeceased by her parents as well as her two brothers Joseph and William. She is survived by her sister-in-law Pat Ferguson, her nephews Robert, John and Gregory Ferguson, her nieces Patricia Howell and Irene Peacock as well as by several grandnieces and nephews.

All funeral services and internment will all take place on the grounds of Mount Saint Mary College, Newburgh, New York. The wake service and Mass will be held in the Chapel of the Most Holy Rosary in Dominican Center. On Monday, November 19, 2018 viewing will begin at 9:15am. The Prayer Service will begin at 10:15am followed by Mass of Christian Burial at 11am. Internment follows immediately in the Cemetery of the Dominican Sisters of Hope.

Funeral arrangements are under the direction of Brooks Funeral Home, Gidney Ave, Newburgh, New York. Donations in memory of Sister Lorraine can be made to the Development Office of the Dominican Sisters of Hope, 299 North Highland Avenue, Ossining, New York 10562.

Sister Lorraine’s successful art series can be purchased or accessed online at: www.ophope.org/art-series