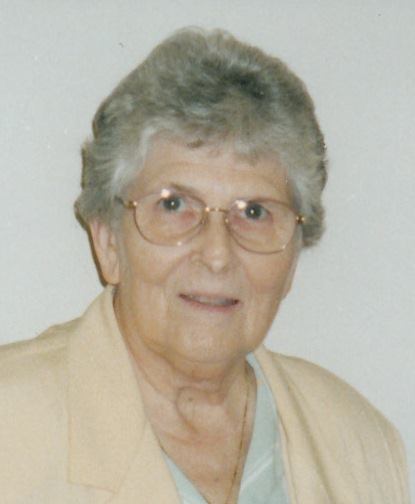 Sister Jean Merrell, OP (formerly Sister Mary Judith) of the Dominican Sisters of Hope died January 3, 2018 at the Woodbury Mews in Woodbury, New Jersey. She was 87 years of age.

The daughter of the late Fred W. and Elizabeth V. Warner Merrell, she was born February 27, 1930 in Jersey City, New Jersey.

Sister Jean entered the novitiate of the Dominican Sisters of Newburgh, New York on September 8, 1951, made her First Profession June 17, 1953, and Final Profession August 21, 1956.

Sister Jean earned a BS in Elementary Education from Villanova University and MFA in Speech and Drama from Catholic University of America.

Sister Jean’s teaching ministry spanned the years 1953-1974. She taught at both the elementary and high school level in New Jersey, Connecticut and Puerto Rico.

In 1974, Sister Jean began a whole new career in Government services. She first provided clerical services to Congressman Gillman’s office in Newburgh, New York and then in 1975 Sister moved to the Washington, DC area and worked for a variety of government departments until 1999. Her responsibilities included working as a Management Analyst for the United States Department of Labor, Secretary to the Chief of ADP and later as the Editorial Assistant to MESA Department of Interior; and finally as Program Analyst and Program Specialist for the MSHA (Mine Safety and Health Administration) Department of Labor in Arlington, Virginia .
Sister remained in Arlington until 2005 providing a ministry of Prayer and Christian Hope. From Virginia she moved to Newburgh NY and spent two years at the Center of Hope before relocating to Mantua, New Jersey, where she did volunteer service until 2013. Sister Jean spent her remaining years in Assisted Living at the Woodbury Mews in Woodbury, New Jersey.

Sister is predeceased by her parents, her sisters Audrey Sheppard and Marilyn Jeffrey. She is survived by her niece Jean Zirbser and nephews David and Mark Bogacki and Douglas and Clifford Jeffrey.

Her funeral will be held on Tuesday, January 9, 2018. All services will take place in the Chapel of the Most Holy Rosary at the Dominican Center of Mount Saint Mary College, Newburgh, New York. The Wake will begin at 9am, followed by a wake service at 10:15am. The Mass of Christian Burial will be celebrated at 11am followed by her burial in the Dominican Sisters Cemetery in Newburgh, NY.

Donations in memory of Sister Jean Merrell can be made to the Dominican Sisters of Hope Development Office, 299 North Highland Avenue, Ossining, New York 10562.