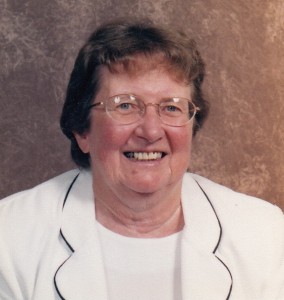 Our dear Jean went home to God quietly and peacefully as she did most everything else. As Colossians told us she had already put on compassion, kindness, gentleness and most days patience.

It was at home that she learned these virtues through her mom and dad. She admired her father’s dedication and his discipline in getting tasks done. From her mom she learned to worry and be concerned about others and their welfare. From Peggy she learned fun; even if it meant going to find her in the movies because she and her friends stayed for extra shows.

Her days at St. Mary’s grade school and high school gave her the experience of love – love of friends who still keep in contact and love of learning and teaching from the sisters.

Whether it was at the soda fountain in Woolworth or a dance or school event she lived and breathed the love of all at St. Mary’s. It was a place to put on God and love being one in a community. When Jean let it be known she was entering the Dominican sisters, some of her classmates, the boys, thought it was such a waste for her to be locked up in a convent. She was pretty, smart and fun.

But making and loving friends didn’t end with St. Mary’s; rather than losing that love Colossians encourages; she found friends in the congregation. Her dear friend S. Janice was with her in those early days as postulants and novices and with her in community showing compassion to one another. She made many friends, but Sister Margaret Charles was one she cherished and always wanted to see. Now here is night and day – Margaret is quick and determined, while Jean was slow and at times uncertain. But friendship is a gift, not a testament to likeness.

And then there was the friendship with Agnes, Dorothea Flanagan and S. Ricarda from the days in the Bronx at Nativity. Agnes and Jean studied together at Fordham and traveled to class together on the train. However, the scene I most remember about the two of them was the first summer we went to the shore. The house we rented was odd to say the least. The bathroom was the oddest – the toilet was on a platform 4 inches off the ground – literally a throne room. But more interesting was that the windows throughout the house were very low. On one of the first mornings Jean and Agnes who shared a room were in bed saying the office so as not to disturb those sleeping in the parlor. Along came the garbage man who waved in at them with, “good morning girls.” On they went with the office.

Colossians speaks of compassion, kindness, humility, gentleness, and patience while Isaiah talks about the afflicted, captives, the brokenhearted and prisoners.

ertainly Jean freed prisoners from the slavery of ignorance; soothed the brokenhearted student or family member; released those captive of anxiety of grades and student teaching; and all those afflicted by fear of life’s choices. Yes she did all that while bearing her own suffering of fear and anxiety. As she would say she just wanted to be a teacher. She loved teaching. As a three year old she wanted to read so she could go to school. So she demonstrated her great skill and the congregation sent her for further study at Fordham. The reward was to become a teaching principal at St. Patrick’s here in Newburgh. Now for most that would be seen as a promotion, but for Jean it was separation from the real love, teaching. Then she was sent for the doctorate at NYU. While there she oversaw the NYU Reading Clinic. But then she went to the Superintendent’s Office to be in charge of reading and language arts.  All this she did well, made numerous friends, but was somewhat brokenhearted because she did not see herself in these roles. She was a classroom teacher. Though not many knew this, her greatest gifts of a keen mind and talents beyond her imagination were her greatest crosses, but her real grace was none knew this. She held her suffering in her quiet gentle way and continued to express compassion despite them or because of them. She held her own suffering and thus was able to hold the suffering of others.

She was pleased to come to the college full-time and shared her love of teaching with the students. For each student she kept a 5 by 8 index card with when she taught the student; the experiences the student had and the grades. This was so she could write a recommendation for them later on. We just got her to dispose of them not too long ago. There were hundreds. She also served as chair of the Division of Education (again something that caused her much stress) however; she led the division through the state mandate for competency based education. I first worked with Jean in the early 80′s when I came to the college, although we had been living in community together from 1972. I had witnessed her ability to get the teacher preparation students to perform well in their field work while I was at the Bishop Dunn. But at the college, I witnessed her gentle but firm way of advising students. We shared office space which was only separated by a partition. Jean spent hours advising. She tracked down every advisee. No shows received telephone calls to them or sometimes to their homes. You were not safe from Jean. We both taught the five credit curriculum course which ended with a large binder from each student with the unit plans and activities recorded in them. She slaved over each unit and I must say chided me because I corrected so quickly. Jean did not move quickly. She moved deliberately. Even when she told a story, if interrupted, she would pick up that story at exactly the word where she had been interrupted. You were going to get the whole story.

Matthew’s gospel paints a tender scene of Jesus and the children. That was also Jean’s scene. She loved to watch little children at play. When we would be on the beach she would call our attention to each activity of the children playing, running crying from fear of the surf or rushing into it. Most of us enjoyed them, preferably at a distance so they got no sand on our towels. Not Jean. In restaurants she looked for them. She would be glad to see many because as she said more children mean more teacher jobs. She was a teacher’s teacher.

Jean was a gentle, compassionate, smart and caring person who loved her family fiercely. She adored her dad and cherished her mother faithfully visiting her at home or in St. Vincent’s. Doing chores that sometimes did not turn out well like the painting on front the porch. She treasured Peggy as deeply as anyone could. She looked forward to visits whether in Paterson or at the shore. She often regaled us with the stories from Lavallette. She constantly told stories of Rita ( RazMaTaz the cat), Edward ( motorcycle, surfing), Louie ( King Louie – can’t tell those stories), Lori        ( always lovely stories), Louis( lacrosse), Nicole( loved she was a teacher) and Eddie( surfing in college). And she told us loads of stories which we will not share publicly. She kept our conversations going at the dinner table about all you were doing. She loved the times spent with all the cousins, the movies and the dinners; getting to see all of you was such a joy for her.

In these last few weeks, it seems the 42 years of community together have gone too quickly. As we each reflect on these days, we all have our favorite stories. The fun we had at the shore; our moves from house to house. Jean was the one who labeled all the boxes. We were so organized the movers always had to return money to us. Then there was Emily the cat when we lived at Beale’s. Jean just loved watching Emily call to us from the roof of the house. Of course there were stories about our Labradors ,Chessie and Maggie. The one I most remember was the day Jean told us she was going on sabbatical. She was drained, tired and burned out. We were at the dining room table. Jean was crying. Chessie who never jumped up at the table came running and put her paws on the table so she could lick away the tears.  Forty two years of love and community.

But still it seemed she left us too quickly. On the Sunday over a week ago when Janice and I went to tell her that she would be going to hospice. She began to recite a prayer to the Holy Spirit she learned as a child. She could remember everything…poems from the third grade; things people said to her in 1940, what she wore to school on a certain day. Neither Janice nor I had ever heard her say this prayer. She said this is a prayer I say to accept the things I don’t want to do. She didn’t want to go to hospice; she wanted to come home. Finally, she said it was OK. She grabbed Janice’s hand and told her she was such a good person. She then turned to me and said I was a good person too, loud, but a good person.

And so Jean all these good people bring you home to the place where you can revel in all the children; celebrate with all your family; be welcomed by all of our sisters who have gone before you; and intercede for us who miss you.

You can link to Sister Jean Rosaire’s obituary here.