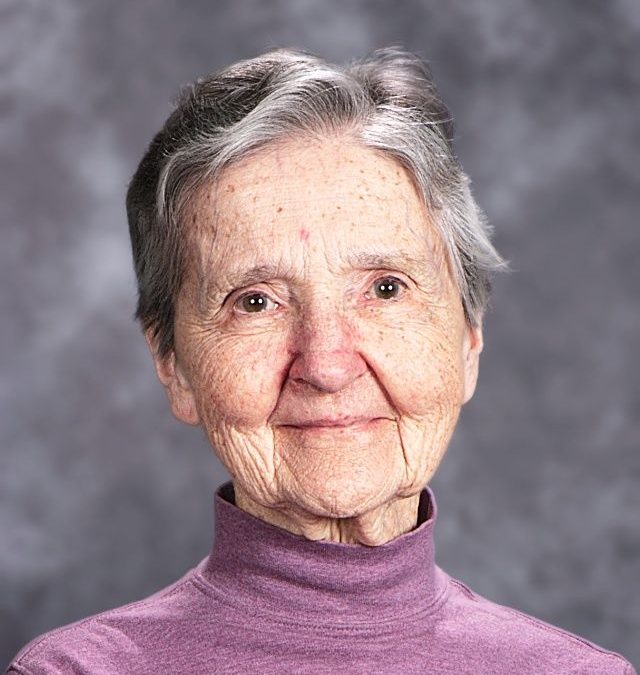 Sister Joan Coffey, OP (Sister James Cecilia) of the Dominican Sisters of Hope, died May 11, 2020 in Morris Hall, Lawrenceville, NJ. She was 91 years of age.

The daughter of the late James Edward and Nora Riley Coffey, she was born March 30, 1929 in New Rochelle, New York.

Sister Joan entered the novitiate of the Dominican Sisters of Newburgh on September 8, 1947, made her First Profession June 25, 1949, and Final Profession August 22, 1952. Sister Joan earned her BA in French from Villanova University, Villanova, PA, her MA in French from McGill University, Montreal, Quebec, and her MTh in Religious Studies from Drew Theological School, Madison, NJ.

Sister Joan began her ministry in teaching at the elementary level in Casa San Jose in Newburgh, NY and then at Bishop Dunn Memorial School in Newburgh, NY. Using her degree in French Sister taught at Pope Pius XII Regional High School in Passaic, NJ. Although teaching French was her first love, Sister accepted the call to serve as Principal of Academia San Jose in Villa Caparra, PR and later at SS John & Paul School in Larchmont, NY. Completing her service as principal, Sister Joan arrived at Mount St Mary College in Newburgh NY, where she began her service in higher education. First she taught French, then became the Registrar and finally the Director of Studies. Upon leaving Mount Saint Mary College, for the next eight years she answered the call to Congregational Administration as Councilor, Director of Personnel and Formation Coordinator for the Dominican Sisters in Newburgh, NY. Upon completing her Congregational service, Sister returned to New Jersey and worked as a guidance counselor at Paramus Catholic High School in Paramus, NJ, Director of Continuing Education at Caldwell College in Caldwell, NJ, and as an academic counselor at the College of Saint Elizabeth in Convent Station, NJ. Sister Joan later became assistant to the librarian at the Madison Public Library in Madison, NJ and an assistant to the archivist for the Sisters of Charity in Convent Station, NJ. In the fall of 2009, sister retired from formal ministry and lived first in Asbury Park, NJ, then The Wartburg in Mount Vernon, NY, and finally in Morris Hall, Lawrenceville, NJ.

Sister Joan loved to travel and she was an avid supporter of the arts. She relished opportunities to visit art museums, attend poetry readings, and programs in classical music.

Following in the tradition of the Dominican Order, her love of learning, was integral to her search for the Divine. She is remembered for her determination, personal integrity, capacity for deep listening, and love of her congregation and her family.

Sister Joan is predeceased by her parents. She is survived by her Dominican Sisters of Hope, her sister, Carol Philp and her niece, Susan Bivona.

Due to the current situation with covid, a celebration of her life will take place at a future date. Sister will be buried in the Dominican Sisters of Hope Cemetery on the grounds of Mount Saint Mary College, Newburgh, NY.

Funeral arrangements are under the direction of Brooks Funeral Home Newburgh, NY.