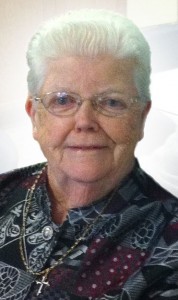 Sister Louise Synan, OP (Sister Mary Patricia) of the Dominican Sisters of Hope, died on June 4, 2014 at the Kaplan Residence in Newburgh, NY. She was 83 years old.

The daughter of the late William E. and Louise D. McNerney Synan, she was born June 14, 1931 in Fall River, MA.

Sister Louise began her ministry years as an elementary teacher in 1954 at Dominican Academy in Fall River, MA. She moved on to New Haven, CT, where she taught at St. Bernadette School from 1957-60; then to Plattsburgh, NY, where she taught at St. Peter’s School from 1960-63. Returning to DominicanAcademy in Fall River, she taught there until 1973 until she assumed the role of principal, which she held until 1986. In the fall of 1986, she accepted a teaching position at Coyle & CassidyHigh School and accepted a position in the same school as guidance counselor. In 1996, she returned once again to DominicanAcademy as guidance counselor for one year and then as principal until the Academy closed in June 1999. Between 1970 and 1992, Sister Louise also served on the leadership team of the Dominican Sisters. She was a representative of the Dominican Sisters of Hope on the Dominican Academy Alumnae Board. She was Secretary for Admissions at Coyle & CassidyHigh School in Taunton, Massachusetts (2000-2003) and personal care and religious lifestyle coordinator for the Dominican Sisters infirmary (2003-2005). She volunteered at San Miguel Academy, Newburgh, NY in her retirement.

Besides her Dominican Sisters of Hope, Sister Louise is survived by Elaine Lorenzo (sister-in-law) who is the former wife of Sr. Louise’s brother William (Bill) Synan, of Westerly, RI, a number of nieces and nephews; and friends Claudette Hambly, of Roseville, CA, Bill Paoletti of Lanoka Harbor, NJ. She is predeceased by her parents and three brothers, Edward D., Owen J. and William E. Synan.

Wake services will be held on Tuesday, June 10 at 10:00 am at the Dominican Sisters’ Chapel in Guzman Hall on the campus of Mt. St. Mary’s College in Newburgh, NY. A prayer service will be held at 11:15 am and the Mass of the Resurrection follows at 12:00 noon. Burial will follow at the Dominican Sisters’ Cemetery at Mt. St. Mary’s College, Newburgh, NY.

Funeral arrangements are under the direction of Brooks Funeral Home at 481 Gidney Avenue, Newburgh, New York.

Donations in Sister Louise’s memory can be made to The Dominican Sisters of Hope, Development Office, 299 North Highland Avenue, Ossining, New York 10562-2327.