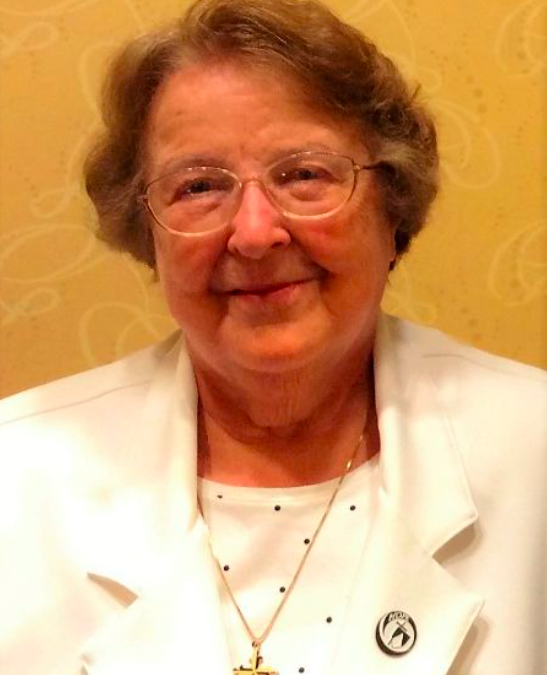 Sister Monica Socinski, OP of the Dominican Sisters of Hope, died on June 25, 2018 at Monmonth Medical Center, Long Branch, NJ.  The daughter of the late Adam Walter and Eva Barbara Maciag Socinski, she was born Eleanore A in West Rutland, Vermont.

Sister Monica entered the novitiate of the Dominican Sisters of Newburgh, New York in September 1956, made her First Profession in June 1958, and Final Profession in August 1961. Sister graduated from Mount St. Joseph Academy in Vermont and earned her Bachelor of Arts degree from Trinity College of Vermont, majoring in French and music. She earned two Master’s degrees: the first one from the Middlebury College French School and the second from Fairfield University in Religious Studies in Liturgy and Scripture.

Sister Monica was involved in various areas of education and music ministry in New York, New Jersey, and Connecticut beginning in 1958 and continuing into her retirement years. She served as head of the music department at Our Lady of Lourdes High School in Poughkeepsie, NY and, while there, received a music scholarship from Cardinal Francis Spellman to study in Florence, Italy. In 1962, while still in Florence, Sister Monica gave a concert of Art Songs sung in Italian, German, French, and English at Villa Schifanoia. She returned to Our Lady of Lourdes High School to teach French and music.

Sister taught French and European History at Mount Saint Mary Academy in Newburgh, NY and French at Saint Joseph High School in Toms River, NJ.  At the request of Bishop Curtis, Sister Monica started a choir at Saint Augustine Cathedral in Bridgeport, CT and served as its director for two years. Sister then was music director at Assumption Parish in Emerson, NJ.  She taught the humanities and music at Albertus Magnus High School in Bardonia NY, music and speech at the Loyola School in Manhattan, and chaired the theology department at St. Joseph of the Palisades High School in West New York, NJ. Sister Monica taught French and theology at St. Joseph Regional High School in Montvale, NJ, where she created and executed a Creative Arts Honors course for senior electives and provided music for the liturgies. Sister had been a world language and substitute teacher at Visitation Academy in Paramus NJ.

Sister felt called to champion the rights of equality for women in all domains as well as equality and justice for the poor and needy.  She volunteered in prison ministry in Bergen County, and she spent several summers ministering to needy families in Mississippi.  Sister Monica resided in St. Agnes Convent, Atlantic Highlands, New Jersey, serving Our Lady of Perpetual Help – St. Agnes Parish as a substitute cantor at weekend masses and working as a teacher of adult religious education teaching on Scripture, Pope Francis’encyclicals, and women mystics and Saints, as well as other spirituality themes.

After completing additional French studies in Bordeaux, France, Sister Monica was chosen to be a member of an international team of Dominican Sisters who served at the historical Dominican sites in Fanjeaux, France. During the summer of 1995, she gave tours of St. Dominic’s House in the town of Fanjeaux to French, Italian, and English tourists in their respective languages.

Sister Monica is survived by four brothers – Anthony and his wife Renate, Henry and his wife Cynthia, Leonard and his longtime companion Erika Burke, John and his wife Janet – her lifelong friend and confidant Sister Teresa Paul, her brother-in-law Alan Gregory, and several cousins, nieces, and nephews.

In addition to her parents, Sister Monica was predeceased by her sister, Monica (Socinski) Gregory and a nephew, Gregory J. Socinski.

Memorial contributions may be made to Dominican Sisters of Hope, 299 North Highland Ave. Ossining New York 10562. A memorial service will be held in the Chapel of the Most Holy Rosary, in the Dominican Center at Mt. St. Mary College 320 Powell Ave. Newburgh, New York 12550 on July 10th beginning with a wake service at 10:15 and mass at 11am and the funeral mass will be held at St. Dominic’s Parish, 45 South Street, Proctor, VT on Saturday, July 14 at 11am.