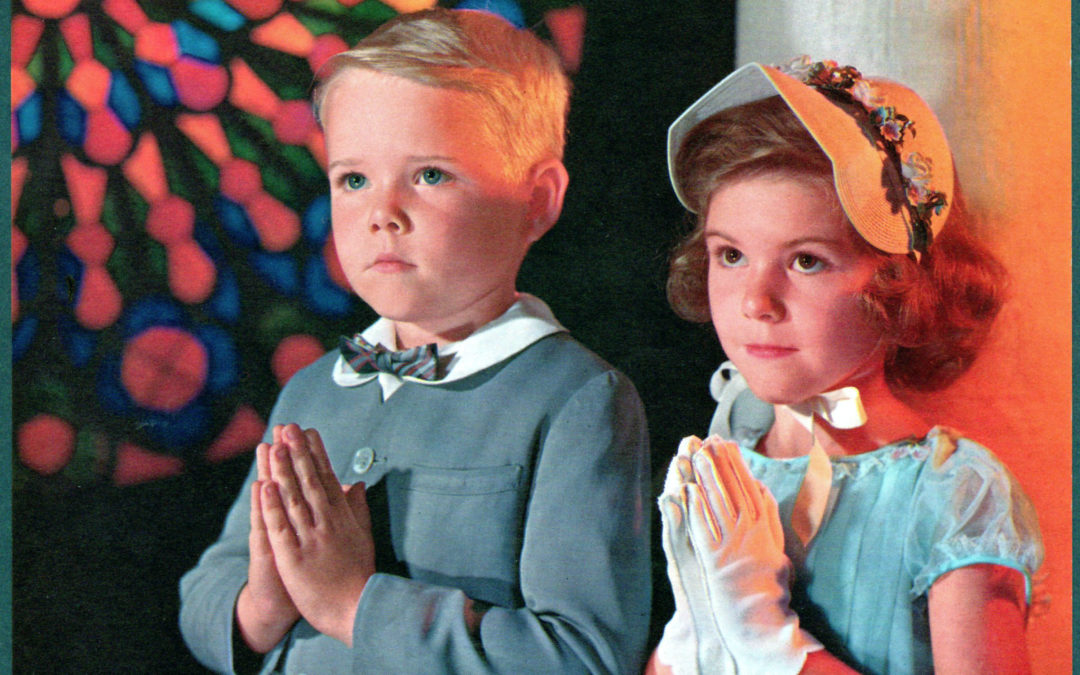 In my childhood memories, “church” was identified by difference; if you belonged to this one, you didn’t belong to that one. There was something wrong about that one. Many years later, I learned that a church is not so much a building as a group of people, but the same distinction applied: If they weren’t our group, they were wrong. In college we earned three credits in a course called Apologetics for studying, in depth, just why our church was right; the purpose was to prepare us to challenge enemies of the church, if we ran into any, and to win all arguments.

When I was growing up, priests seemed to belong to a hierarchical institution headquartered in the Vatican and populated by men. Their sermons included explanations of rules that we needed to follow, exhortations on the need for funds for repainting the church (so that the large cardboard thermometer in the vestibule would turn completely red), and the Legion of Decency pledge that we took so that we would refrain from going to objectionable movies. (We always felt sorry for the theatre manager who attended Mass but didn’t take the pledge because he was under contract to film distributors to accept what they sent.)

I didn’t find this church interesting. I had to go so I went.

Since Pope John XIII’s Vatican II and now again with Pope Francis, the church is vitally different from before, in a way that has to do with life and reality, with being and becoming, with membership in an evolving universe, with being People of God!

This new church owes much to cosmology, to theologians like Teilhard de Chardin, Ilia Delio, Sandra Schneiders, Joan Chittister, and so many more, and to the reminder that God’s first creation was the Big Bang-generated universe. This church knows that God’s name is Mercy and that every holy group, whether its nickname is Jewish, Muslim, Presbyterian, Episcopalian, Lutheran, etc. has something to give to the total reality of creation, redemption, and salvation. And without their contribution, we would all be poorer.

We are church and our job is to introduce mercy (sometimes called compassion or forgiveness or God’s love) into every life situation. And we are called to evolve, to change, to do something new.

According to Ilia Delio, “On the most fundamental level, evolution reflects the fact that life changes, new things happen . . . . We live in an evolving, unfinished universe, which means the one thing we all share is the future. In the view of Teilhard, we must co-create the future together.”

Together. In our time. Because relationship is everything, from particles and waves of quantum physics (which I wish I understood) to the Trinity, in which the Creator’s love for the Son became the life-giving Holy Spirit.

Relationship, evolving into a mercy-filled, God-directed future must be our church’s job description. Do we have time for anything less?