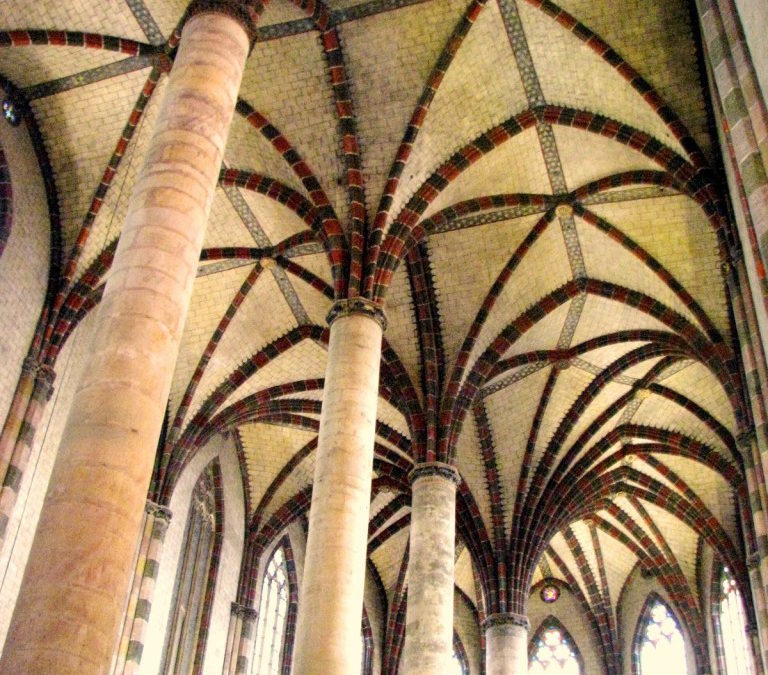 It didn’t take very long for the focus of the Fanjeaux Pilgrimage to shift from Saint Dominic to Saint Thomas Aquinas. By the second day of the pilgrimage, the twenty-three of us found ourselves visiting Saint Thomas Aquinas’s tomb and discussing his life at length.

Thomas Aquinas was born in Italy in 1225, only four years after Saint Dominic’s death. In 1244, he entered the Dominicans, and, in 1245, he moved to Paris (and later to Naples, Rome, and Cologne) to study, teach, and write.

Written toward the end of his life, Thomas Aquinas’s most noted work is the Summa Theologica, in which he posits five arguments for the existence of God. He also famously supports the idea that both faith and reason ultimately come from God and can work in collaboration: he believed that revelation could guide reason and prevent it from making mistakes, while reason could clarify and demystify faith.

His legacy continues to be of great significance to Dominicans today. As Rev. Anthony Strause writes, Thomas Aquinas systematically progressed through the major and minor questions of the faith with 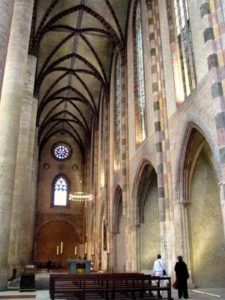 stunning accuracy, such that, centuries later, Pope Leo XIII advised that all seminarians be required to study St. Thomas Aquinas (no other saint received such a recommendation, not even St. Augustine), and declared St. Thomas the patron of Catholic universities, schools, and students.¹

To rashly overgeneralize, Thomas Aquinas was smart and he wrote a lot. But the bigger point here is that his lifelong focus on study was no coincidence; it was entwined with his identity as a Dominican. For Dominicans, study isn’t just important, it’s essential. In fact, study is understood to be a form of worship.

If we believe that our minds are gifts from God, then expanding our minds is a way of using that gift to consequently bring more glory to God. Study can be a form of contemplation on God’s creation, or even a contemplation on God wholly. Moreover, as it so often is for Dominicans, study can be used for others: to teach, to expand other’s conceptualization of the world around them, and to alert others to the very presence of God. 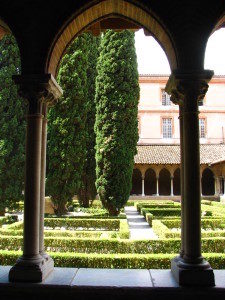 It’s no wonder that Father Rick Peddicord, OP a facilitator on the retreat, noted that study emphasizes this “major need to be of use to others on their path to salvation.”

It’s no wonder, too, that study is one of the four major pillars of Dominican life.

Although Thomas Aquinas is remembered as a writer, a thinker (or, in less-flattering accounts, a fat man), he is seldom depicted as a wrestler. Yet, Thomas Aquinas was just that: he wrestled with truths and engaged with them. He considered them, critiqued them, and put them together such that something with more truth came out in the end.

Father Rick noted that wrestling with Truth is so fundamental to the Dominican Order. As he reminded us, “All of our study is meant to put us on the path to God, who is Truth.” 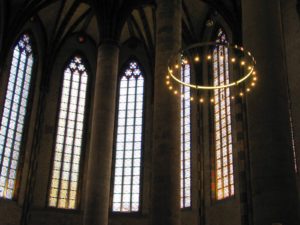 Ultimately, Thomas Aquinas illustrated this point himself. There is a story that, later in his life, he had a vision of Christ on the Cross and was asked by Our Lord what reward he wanted for all he had done and written. Saint Thomas easily could have asked for more knowledge with which to write his books or for more people to read them. No doubt, there were a slew of things that this well-traveled scholar could have requested.

The second day brought us to the Church of the Jacobins in Toulouse, where, through a fluke, the grave of Thomas Aquinas has been since 1369. The interior of the church is made up of colorful bricks that form bright arches and pillars. Toward the front of the church, one pillar expands up and outward into a palm-like figure on the ceiling, marking the famous “palm of the Jacobins.”

In the church, we sang the Tantum Ergo and Pange Lingua, both of which were written by Thomas Aquinas for the feast of Corpus Christi. (We also chanted the Salve Regina in the attached convent: watch by clicking the link below.)

Throughout the massive church, a spirit of peace resounded.

If, in the true Spirit of a Dominican, Saint Thomas Aquinas spent his life vigorously thinking, reading, writing, studying, and wrestling with truths of all kinds, it feels appropriate that his rest should be here, not with his nose in a book, but with his body resting gently under a sprawling palm tree.

For two weeks in June, a group of twenty-three people (about half sisters and half lay people) traced the footsteps that Saint Dominic laid in France over eight centuries ago. We learned about the life and ways of Saint Dominic so as to consider how we can live in a way that spreads his spirit today. This article is the third in the resulting series on Dominican faith. We will post these in the coming weeks as a countdown to Saint Dominic’s Feast Day, August 8th. For more on Saint Dominic, visit csvf.org.