Our pilgrimage started in Fanjeaux, Southern France. We stayed at a guesthouse, Le Belvedere, where I had a panoramic view of Fanjeaux from my room.

As I looked out and to the left of my balcony, I actually felt I could see Dominic walking up that street with his shoes in his hand coming toward Le Belvedere. 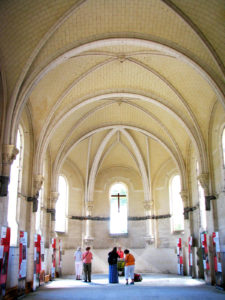 Deann (right) and others explore the first Dominican convent in Prouille

With each place I visited, I learned more about the man Dominic of Osma who first founded the Order of Preachers in Prouille and then (officially) founded it in 1215 in Toulouse, France. He was a man of great faith. Dominic’s unequivocal faith kept him going. Of course, the days were long, hot, hard, and lonely, especially after his friend Bishop of Osma, Diego de Abebo, was called back to Rome. Dominic chose to remain and work among the Cathars even though the Pope didn’t want any more energy spent on what the church saw as “heretics.” Dominic learned to enjoy and like the Cather people; he felt truly sorry for them. Day after day, he debated with them and listened to them and helped them, wherever he was. He would return home exhausted, but he prayed through the night for the souls of the Cathars. He traveled among them, listening and helping whenever and wherever he saw the need. There were threats against his life. But his pleasant manner and kindness –even his singing!—confused his enemies and actually saved his life more than once. 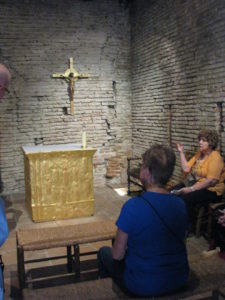 Education was also very important to Dominic, as he himself had spent ten years studying Arts and Theology in Palencia, Spain. Education was instrumental, too, in his debates with the Cathars. He was able to debate intelligently and without violence. He knew this was the way to change minds. Likewise, he wanted his followers to study and be educated in the teachings of the church. Dominic played a major role in the creation of the first university in Toulouse in 1229. Classes took place in the city’s monasteries.

The house where Dominic actually lived from 1208-1213 was another attraction for us. The stained glass windows told his story. The fireplace, in front of which he prayed, and his relic, brought Dominic to life for me. But what struck my heart was his devotion to the Madonna, of which there was a beautiful carved image in his home.

As I look through the pictures I took on my pilgrimage, I relive a very special time that I will never forget, and I feel blessed.

I believe my pilgrimage has deepened my awareness of the Dominican charism. Dominic taught me, first and foremost, faith in God. 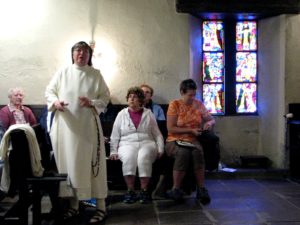 The group next to a stained glass window in St. Dominic’s Fanjeaux home

Second, he didn’t think it was important to be a great homilist, but it was important to him to be a deep listener. Listen with your heart and look at all people through the eyes of God. Never be judgmental. Saint Dominic listened and searched for the truth through prayer, and his faith ensured the truth. He was not an ideologue. He believed in educating oneself in all areas. The truth comes in many venues. He preached zeal that was met by zeal, humility that was met by humility. Of course, he also believed in rigorous self-denial. Now that is a hard one for me!

Working for the Dominican Sisters here at Mariandale Retreat and Conference Center, the spirit of Dominic is so apparent. We also try to see all people through the eyes of God, to never be judgmental.

We welcome those who join us on programs and retreats regardless of background or creed, and I hope to welcome them, too, with warmth, acceptance, humility, and love.

For two weeks in June, a group of twenty-three people (about half sisters and half lay people) traced the footsteps that Saint Dominic laid in France over eight centuries ago. We learned about the life and ways of Saint Dominic so as to consider how we can live in a way that spreads his spirit today. This article is the fourth in the resulting series on Dominican faith. We will post these in the coming weeks as a countdown to Saint Dominic’s Feast Day, August 8th. For the entire series, click here.