Julian of Norwich Comes to The Center at Mariandale 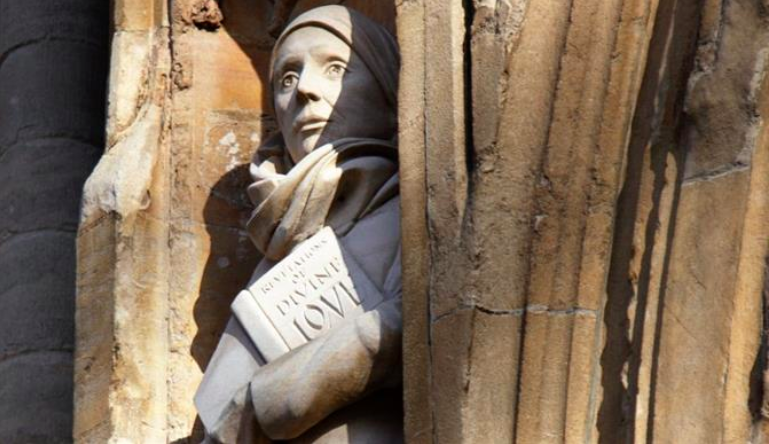 When Dominican Sister of Hope Jo-Ann Iannotti, OP first learned about the 14th-century English mystic Julian of Norwich, she was hooked. Julian was a mystic, a hermitess, and a woman of her time. Her experience of a series of revelations (showings) would revolutionize future generations’ experience of God, Jesus Christ, the meaning of suffering, and the standard by which we judge our relationships with each other.

After delving into Julian’s work (Julian produced the first book written in English by a woman, The Revelations of Divine Love), Sister Jo-Ann traveled multiple times to England to encounter Julian on her home turf, Norwich. Since falling in love with Julian in the 1980s, Sister Jo-Ann felt that she was meant to tell other people about her.

There’s more to the story. But, to learn it, you’ll have to hear it from Sister Jo-Ann herself (she requested that we not tell it all here). Luckily, she’s presenting Julian of Norwich: The Woman, Her World, and Her Book at The Mariandale Center on Saturday, October 26th from 9:30 am to 3 pm.

Through her “showings,” or revelations, Julian of Norwich came to know God as “father and mother,” and a figure of hope. One of the most hopeful revelations found in Julian’s book is, “There is no wrath in God.”

Sister Jo-Ann hopes that this will be as powerful a message for participants in her program as it had been for her.

“Julian has a very deep understanding of the mercy of God and the love of God,” Sister Jo-Ann says. Julian wrote, “In spite of everything that I had been taught (in the Church), I  saw no wrath in God. I saw the anger that people carry is in themselves. It is not in God.”

“Julian found that God is love. That is God’s meaning.  You couldn’t find anybody more hopeful than Julian,” Sister Jo-Ann adds.

In a world mired by a harsh news cycle and widespread unrest, this message of hope feels like a welcome respite. The program will include a presentation on Julian, sharing, lunch, and quiet reflection time. There will be a selection of resources for participants, ranging from books about Julian to photography of Julian’s cell and area taken by Sister Jo-Ann.

“This program is for anyone who would like to be refreshed in their relationship with God and their understanding of God,” Sister Jo-Ann says. Her aim for the program is that participants walk away with a lighter heart. She wants these new friends of Julian to feel open to befriending Julian’s God and to return to that God in prayer.

“We’re called to have as full a relationship with God as one can have,” Sister Jo-Ann says. “For someone who needs their hope renewed, Julian can do that. She definitely did for me.”

Sister Jo-Ann Iannotti will present Julian of Norwich: The Woman, Her World, and Her Book on October 26 from 9:30 am – 3:00 pm at The Center at Mariandale in Ossining, NY. $60 includes lunch. Register here.

Sister Jo-Ann was interviewed on the Enlighten: Uplift & Inspire podcast. In her interview, she shares what drew her to becoming a Catholic Sister, the meaning of the vows she took, her full career including her ministry as an educator, associate director of vocation, director of religious education, script writer for radio and television, poet, reporter, photographer, all while embracing the rich inter-relationship between art and spirituality. And, of course, she discusses her upcoming program on Julian of Norwich.
Listen here: