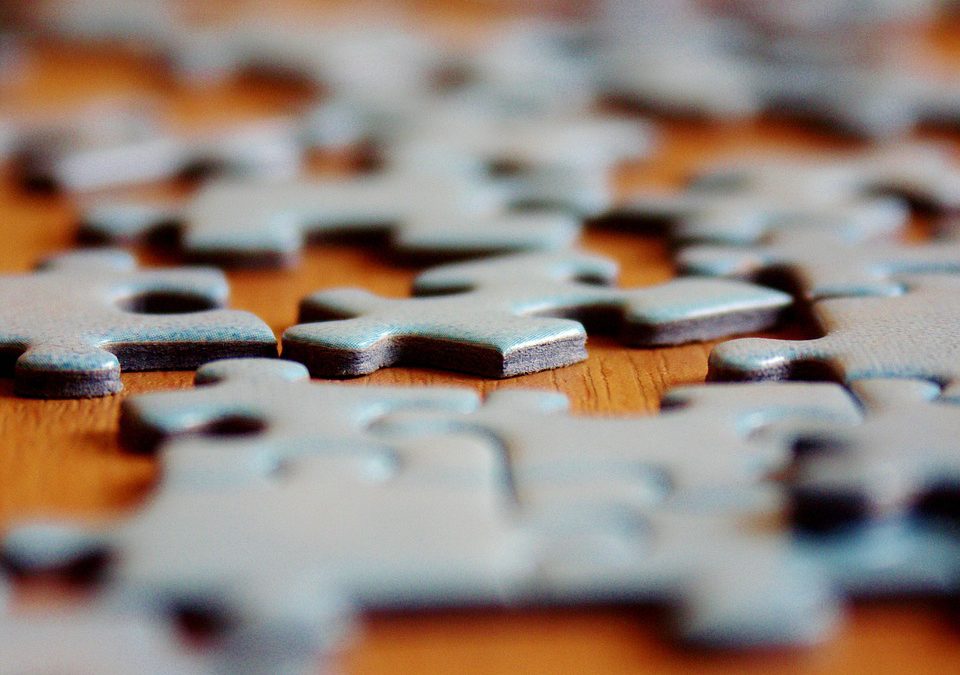 Lately I’ve become really interested in computer jigsaw puzzles – all the random tiles of shapes and colors that crowd the laptop screen before eventually revealing the mosaic! It’s satisfying to solve the mystery.

I actually have nothing whatsoever to do with creating the picture. Each piece inevitably has one and only one destination; it goes here, not there, regardless of where I think it belongs. I have to obey the design inborn in the mosaic itself.

I was thinking about puzzles as I watched a TV commentator speaking of the disjointed signs of the times. Our new century is also a mosaic to be solved, isn’t it? What picture is emerging?

–September 11 2001; Columbine, Newtown, and the many random shootings by teens; the weapons of mass destruction that did not exist but that fueled a never-ending war in Iraq and the Middle East;

–a minority President who is hated and blocked by both the party of the old guard and the undisciplined, reckless Tea Party of the new; the perils of global warming and the further perils of denying it;

–the widespread priest abuse of children and its elite cover-up, dramatized in Spotlight, the Oscar-winning film; the death-march of Syrian refugees abandoned by their country and all but rejected by the world; an all-pervasive social media and the death of privacy; the beatings and killings of Blacks often by representatives of law and order; the rise of ISIS with its mission to destroy us;

–the very rich 1% of our population and the encroachment of poverty as the new norm; the conservative majority’s apparent need for the animalistic culture of its leadership candidates.

The AA Prayer asks for the serenity to accept the things we cannot change, the courage to change the things we can, and the wisdom to know the difference. Can these experiences that continue to afflict us in the 21st century be changed or must they be accepted? What is Wisdom’s answer?

It’s probable that Wisdom would agree that, in spite of some longing for “the good old days,” change, not sameness or even stability, must be the nature of our reality. To be open to something new.

Maybe the critical agent of change in the 21st century puzzle is the prophetic election of Pope Francis and his faith in God’s mercy. Can it be only coincidence that he came to us at this precise point in our troubled existence?

Can mercy be the answer? Maybe mercy is the context within which the chaos and crises of our lives battle with the complacency of the good old days. As S. Mary Daniel Turner, IHM, has said, “There’s nothing wrong with chaos. Chaos is often at the heart of creativity.” And what is the modality of AA treatment other than to create a crisis, to shake things up because the old remedies don’t work anymore?

Can we accept mercy as a way to be? I’m reminded of one of the President’s press conferences at which reporters were sincerely puzzled that the President’s plan was not to go after ISIS with all of our superior power and annihilate them. I can’t say that the President was motivated by mercy but maybe his words and actions belong within mercy’s context of ruling out returning vengeance for vengeance.

I don’t have press conferences and I don’t have answers except to build the context of mercy within the corners of my day-to-day life.

Have I just described “turning the other cheek”? This was never my favorite Scriptural advice—it seemed so passive—but that’s not Scripture’s problem. Maybe I needed to reach this evolutionary point, be assaulted by so many destructive pieces in our century, before I could realize something: being in the same universe as Pope Francis, being in the same context as Pope Francis, can solve many puzzles.