On the Road, by Sr. Marianne Watts 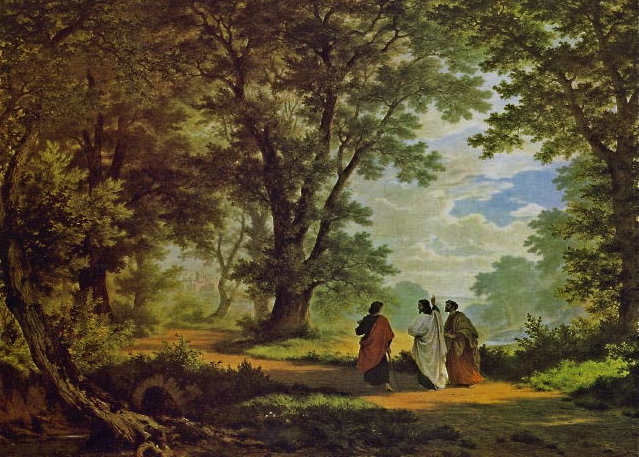 On a recent Sunday, the Gospel reading picked up right after two disciples returned to Jerusalem to tell an amazing story. The trip they had taken on the road to Emmaus had more precisely been on the road to a revelation, one that would change not only their lives but their perception of reality itself. We don’t know why Emmaus had been their destination. What we do know is that after the resurrected Jesus opened the Scriptures to them and included them in the breaking of the bread, Emmaus ceased to matter. The disciples turned back on the road to Jerusalem and moved into salvation history.

To be on the road is such a common metaphor, certainly familiar to Americans. From the beginning, the road westward defined who we were as a nation. And when the Pacific was reached, when the way west was no longer possible (and after a considerable amount of time had passed), we moved into the stars.

That’s one very sketchy way to see our history. The point is that being on one road or another has always been the past, present, and future not only of Americans but of all human beings. We are, in the words of Margaret MacIntyre, “Cosmic Pilgrims.” We, and the Universe that is our home, have places to go.

According to Ilia Delio (The Unbearable Wholeness of Being), Jesus’ life and death led us onto an evolutionary road toward an indescribable eternity, a road that we co-create:

“If creation is to move forward toward its completion and transformation in God, what took place in the life of Jesus must take place in our lives as well. God evolves the universe and brings it to its completion through the cooperation of human beings.”

God relies on the cooperation of human beings? Ilia continues:

“Christian life is an evolution in love, living the beatitudes . . . creating new unities; . . . . We are to orient our lives toward love and to resist systems that stifle love. But this path is not easy. . . .We struggle to evolve through the pains of resistance because we are imprisoned by our fears. . . . We are old wine that has lost its flavor. New wine must be put into new wineskins. What is the new wine in an evolving universe? It is the new spirit of . . . wholemaking that emerged in the life of Jesus—the dynamism of liberating love.”

In The Cosmic Pilgrim, Margaret MacIntyre reinforces the insight of other thinkers when she calls the universe the primary revelation of God. It is where our evolutionary road leads on:

“While knowledge and meaning have evolved and continue to broaden the horizons of our perception, this answer glows at the heart of things and grows brighter all the time: The Universe is held in being by love. Love is our source . . . and our destination. We are not lost—we have always been found.”