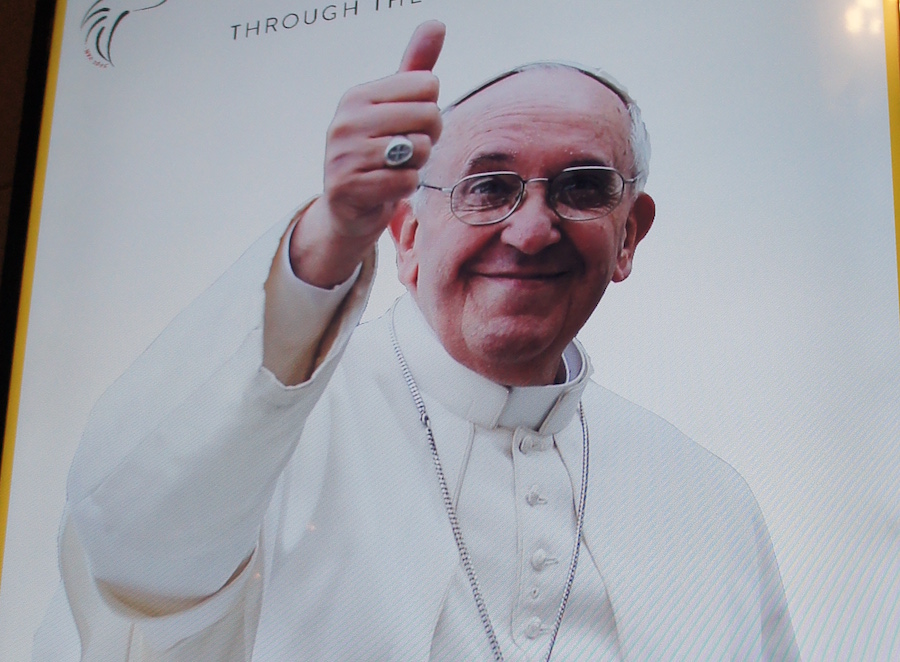 Remember the municipal employee—Kim Davis—who refused to issue marriage licenses because of her rejection of same-sex applicants? The one who announced that Pope Francis had told her to “stay strong,” even as she went to jail for her beliefs?

A Vatican spokesman subsequently explained that Mrs. Davis did not have an audience with the Holy Father nor did the Pope discuss her situation with her. She was one of about 25 people the Pope greeted as he was about to leave for New York.

Why did the Vatican feel the need to clarify this particular incident? To me, it means that neither Mrs. Davis nor her situation belonged on the agenda, because to move in that direction would inevitably be to confront an ideology.

Pope Francis is not about ideology or condemnation. He is about mercy. And what he wanted to leave with all of us was not the memory of a debate. Points were not up for grabs, in spite of the little flare-up promulgated by William Donohue, president of the Catholic League (which, it needs to be said, has no official connection with the Church), who announced that “President Barack Obama is exploiting Catholics by inviting guests who are opposed to church doctrine to the White House to meet Pope Francis.”

(Apparently Donohue didn’t hear about CNN’s report that: “Yayo Grassi, an openly gay man, [and former student of Pope Francis] brought his partner, Iwan Bagus, as well several other friends to the Vatican Embassy on September 23 for a brief visit with the Pope. A video of the meeting shows Grassi and Francis greeting each other with a warm hug.”)

Pope Francis is about mercy. And mercy has often been poorly served in the Church. Cardinal Walter Kasper, in his book Mercy, says that sometimes the Church doesn’t practice what it preaches. “Indeed, many people experience the church as rigid and lacking in mercy. For this reason, at the opening of the Second Vatican Council, Pope John XXIII said that the church must, above all, use the medicine of mercy.”

My early schooling taught me that eternal happiness awaits us at the end of this life, but that moving toward it is an intimidating journey with no guarantees. To this day, I can recite the three conditions of a mortal sin but I have trouble bringing to mind any lessons that assured me that God loved me in spite of myself.

America recently reviewed a new off-Broadway play, The Christians. The play is set in a church sanctuary with the audience treated as the congregation and begins with Pastor Paul’s sermon on why he no longer believes in hell. Everyone in the choir is silent until the associate pastor, Joshua, loudly disagrees. A vigorous debate follows with neither person budging from his belief and Joshua leaves the church to form his own congregation.

The program calls the drama “the human face of ideology” and explains that “We live in a world wracked by violence stirred by intractable conflicts between warring belief systems . . . . But the one common denominator sure to be found at the heart of any of these conflicts is the unslakable self-righteousness of each warring party.”

The play opened a week before Pope Francis’ visit and the review draws a vivid contrast between the characters’ need to assert their righteousness and the Pope’s very frequent use of the word dialogue. The review asks: “Why can they not focus on the multitude of doctrines which they share rather than the one on which they cannot agree . . . ? Why are they so devoted to the punishment of sinners rather than trust in God’s mercy?”

Just a play? Not at all. As Father James Martin points out, the Synod on the Family that just ended changed no Catholic doctrine, but “you wouldn’t know that from the fierce reactions the synod evoked. Even the possibility that the church might deal more openly with, for example, divorced and remarried Catholics or the LGBT community, sent some Catholics into a near frenzy.”

Father Martin recognizes that some of the fear and confusion comes from sincere Catholics who truly (and mistakenly) believe that the Church cannot change. But there are “darker reasons for the anger: a hatred of LGBT Catholics that masks itself as a concern for their souls, a desire to shut out divorced and remarried because they are ‘sinful’ and should be excluded from the church’s communion, and a self-righteousness and arrogance that closes one off to the need for mercy.”

Will it ever be different? Not until the eight beatitudes from Jesus’ sermon on the Mount are as familiar as the conditions for a mortal sin.

Especially the one that begins “Blessed are the merciful . . .”